A Bachelorette weekend goes horribly wrong when a stripper is accidentally killed and the ladies struggle with how they should deal with the problem in Lucia Aniello’s Rough Night.

The premise of Rough Night couldn’t be simpler and it conjures up comparisons to The Hangover almost immediately in that it’s a group of friends running around to perform damage control on a celebration gone horribly wrong. Simple ideas like this allow the characters to interact in various ways and should provide fodder for plenty of laughs.

Comedies are hard to review because I believe that comedy is more subjective than any other genre since people have wildly different ideas of what is funny to them. I’m not interested in a lot of mainstream comedy but find myself impressed periodically. Rough Night had a trailer that I laughed at so I decided to take the plunge and see if the film would measure up.

Sadly it doesn’t. I chuckled once or twice but on the whole I found the experience a desperately unfunny one. I could see where the jokes were supposed to be and understood why I was supposed to be laughing but it all felt so forced to me so I was barely amused by any of it. For those that like this sort of thing there should be a good mix of comedy here as some of the humour is dialogue driven and there’s a good amount of physical comedy to offset that. It does attempt the “gross out” comedy here and there as well so there are at least a variety of attempts to make the audience laugh. 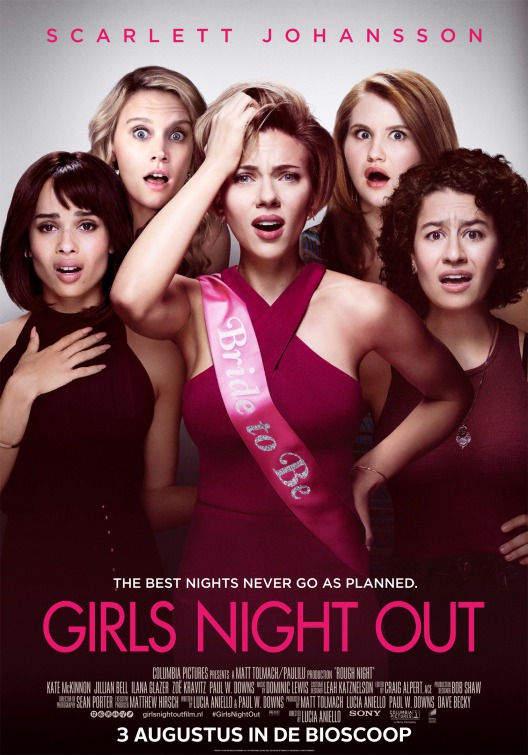 The characters themselves weren’t all that engaging. Jess (Scarlett Johansson) is an uptight career woman, Alice (Jillian Bell) is the clingy best friend, Blair (Zoë Kravitz) is the semi-uptight career woman, Frankie (Ilana Glazer) is the free spirited activist and Pippa (Kate McKinnon) is the quirky outsider. They are a collection of character who would only really come together in a sitcom type situation which this very much is and there isn’t an awful lot more to them than their base traits. Don’t get me wrong there are attempts at depth such as Frankie and Blair being former lovers who are still clearly into each other or Alice actually having a reasonable reason for her overwhelming clinginess but beyond that there’s very little to say about any of them.

Thankfully the ability of the actresses playing these characters brings a bit more to the table. They work very well together and it does feel like they are old friends who have drifted apart over the years. The film does a great job establishing the familiarity they all share with a tinge of awkwardness to account for the fact that they really don’t get together very often and they have all become very different people over the years. It’s a good example of talented performers doing a lot with very little.

Unfortunately the underdeveloped characters meant that I had no real reason to be invested in their problem. The dead stripper issue establishes itself fairly early in the film but I had no reason to want them to succeed in getting away with the crime. As you might expect the film goes to ludicrous lengths in their attempts to hide the body and make the whole problem go away but never really addresses the underlying question of why they didn’t just call the police in the first place. The resolution of the dead stripper plot is beyond ridiculous and strains credibility beyond breaking point.

A subplot involving Jess’ husband to be, Peter (Paul W. Downs) assuming she doesn’t want to be with him and speeding across the country to clear the whole thing up is somewhat unnecessary though his Bachelor Party contrasting the drunken debauchery of the women with an elegant and sophisticated wine tasting is a nice touch. It doesn’t try to make fun of the fact that this isn’t typically how men behave in comedy films and keeps it as the counterpoint to the women’s exploits. It’s well handled and the contrast does make for some solid comedic moments.

Another thing I really liked is how this film approaches less than conventional life choices. An open marriage is depicted in the form of polyamorous neighbours that is a bit on the nose but also shows that there are alternatives to Jess’ future conventional marriage that do work for people. There is also the aforementioned former relationship between Blair and Frankie that combines with the fact that Blair is in the middle of a custody battle with her ex husband to not draw too much attention to Blair being bisexual. It’s also refreshing to see that the jokes surrounding Alex are nothing to do with the fact that she is the larger of her friends. I like seeing more progressive views in comedies as alternative lifestyles so often become the fodder for the jokes.

Comedy is subjective but I didn’t find this film funny. There is a good mix of comedic styles for those that might be interested but I wasn’t engaged by the characters or the story itself so it was very difficult for me to invest in any of it. The characters themselves are very thin with only one major base trait. This is somewhat enhanced by the talents of the actresses who manage to make the friendship feel more real. The contrast between the Bachelor party and the Bachelorette weekend was well done but the bizarre road trip subplot involving Jess’ husband to be was unnecessary. I was impressed by the film’s depiction of alternative lifestyle choices and how maturely they were approached on the whole. There were one or two niggles here but on the whole it was progressive. The comedy may not have worked for me but at least it wasn’t a complete misfire.