“The Good, the Bad and the Crispy”

Lucifer closes off season 2 with a resolution to the Lucifer’s Mother arc when she tries to cover up her accidental murder from last week.

The procedural elements of this show are often the weakest part but there was a refreshing twist on it this week when it was clear that “Charlotte” was the guilty party. Chloe discovering the truth was obviously only a matter of time so the tension comes from Lucifer trying to keep Chloe from finding out. It’s clear that this won’t happen but since Lucifer’s reasons for concealing the truth make sense for him then Chloe effectively becomes the antagonist for the episode as Lucifer tries to find a way to outwit her. 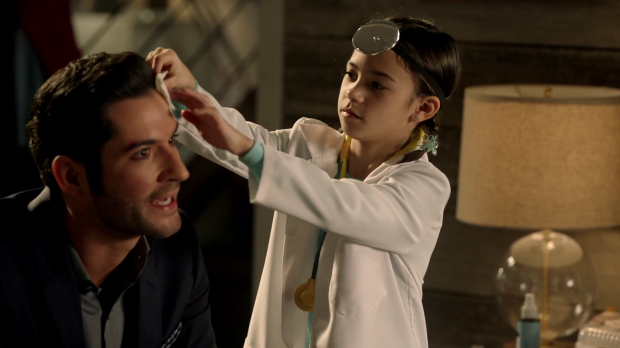 Other than protecting his mother Lucifer has other reasons for ensuring that she isn’t caught. One of which is that she’s a very dangerous being who shouldn’t really be crossed by mortals. It has been well established that “Charlotte” doesn’t really care about humans so is she really going to exercise restraint when backed into a corner?

Another issue Lucifer has is the mechanics of the murder being difficult to explain. If Chloe gets to the bottom of it and implicates Charlotte then that raises the obvious question of how she did it. Heavenly Light is a difficult thing to explain and Lucifer has adopted a position of not telling Chloe the full truth so that she is kept away from his otherworldly shenanigans. It’s not a system that could endure for very long but for the moment it does. Finding out that “Charlotte” is the killer means that Lucifer risks Chloe finding out the truth about him and there’s a lot of tension to that.

This was a big episode for Lucifer as he has to deal with the fact that his mother is essentially at the end of her tether. “Charlotte” knows that discovery is imminent which means that there’s no time to create intricate half truths to appease her when she’s on Earth. Something definitive has to happen and Lucifer knows it.

The scene where this all comes to an end is excellently done. “Charlotte” confessing to the murder she was responsible for while showing no knowledge of the one she wasn’t was a nice touch as it shows how disconnected she has become. Her choice of location says a lot as she positions herself somewhere she can do a lot of damage. The way she delivers this over the phone to Lucifer is brilliantly acted by Tricia Helfer. It betrays her intentions and also comes across as innocent enough to Chloe who can hear everything. Tom Ellis matches this performance with a convincing rendition of sheer panic that leaps off the screen at the viewer. 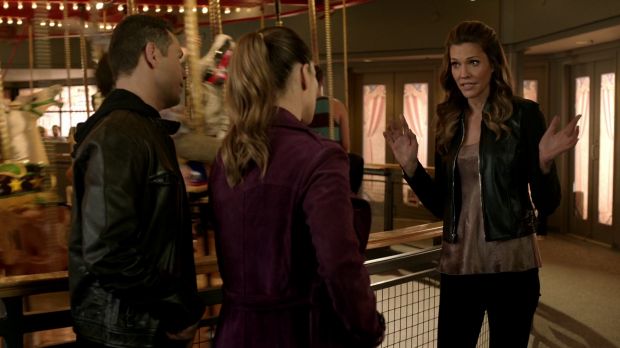 “Charlotte chooses where she will go nuclear

Lucifer realises just how dangerous his mother is. Of course he always had an inkling and was always wary of her but this episode marks the point where he realises that she is a genuine threat to the people around her. Before it could almost have been dismissed as having an inflated sense of herself and not regarding humanity as important but this episode shows malicious intent on her part. It starts with her attempt to kill Linda and culminates in her desire to go nuclear in the middle of a heavily populated area.

Since Lucifer realises that his mother is dangerous it becomes a problem that he has to deal with and his approach is actually really mature. Prior to this episode Lucifer was content to toss his mother into Heaven, seal the gates behind her and just see what happens. Lucifer’s approach to dealing with his father is to be away from him so he was perfectly content to let this feud play out without him being a part of it. He has recently realised that his mother’s return to Heaven would lead to a War and there would be lots of bloodshed as a result of that. Lucifer doesn’t want to see his family hurt in this way so tries to convince his mother that ruling Hell could be a good option for her as it would be her own domain more or less.

The ultimate resolution is to open a portal to nothingness and provide an opportunity for “Charlotte” to make a world in her own image just as God did. It’s the best solution as it satisfies her desire for control while also keeping the peace.

Amenadiel had a lot of soul searching to do thanks to the recent revelation that he is apparently God’s favourite son. The evidence of this is entirely circumstantial as all he really knows is that his father entrusted him with the final piece of the sword and that matches up with a translated text talking about God’s favourite son. There’s no guarantee of the accuracy of that text but Amenadiel just doesn’t care. His reaction is a cross between childish excitement and a bit of gloating. For the first time in his life he has something to brag about and he takes the opportunity. It’s a great scene and brilliantly acted by DB Woodside. 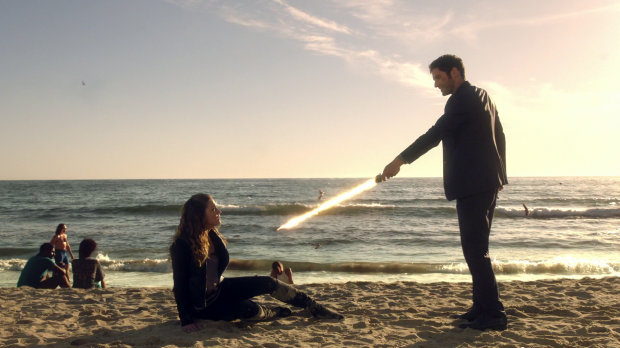 This helps inform Amenadiel’s emotional journey for the episode as he tries to find some way to talk about how he’s feeling with someone that’s willing to hear him. Lucifer is too caught up in his own ego to provide the emotional support required. Unfortunately Amenadiel doesn’t have a lot of options with Maze being less than receptive to emotional conversations though there was nothing stopping him seeking out Linda.

What actually happened was so much better. Having him deliver a raw and passionate monologue to Dan’s improv group was a stroke of genius. It’s a way for people to think he’s acting while also being emotionally vulnerable and getting everything out in the open. Of course Dan wanted him to improvise something else which diffused the moment with some humour but the weight of Amenadiel getting it off his chest was definitely still felt. It also allows for a furthering of the friendship between Amenadiel and Dan that began last week and that is no bad thing.

Amenadiel also theorises that the loss of his powers and his general fall from grace was all a test from his father. One that he apparently failed until this point when he regains some of his abilities. It happens at a crucial point when Linda is close to death and “Charlotte” is about to go nuclear which helps the plot but is also satisfying on an emotional level for Amenadiel. After feeling inadequate for such a long time this shows him regaining some self confidence through regaining his ability to slow down time once again. What this will mean for Amenadiel next season is unclear but it’s the first real step forward he has taken this season.

Maze doesn’t really take a step forward as such but her growth is almost summarised by the way she reacts to other people. Nothing shows how far Maze has come more than her allowing Trixie to play Doctor with her in a very different sense of the phrase than Maze will be familiar with. Her reaction to Linda’s severe wound also shows that Maze has gotten to the point where she genuinely cares about other people. Granted that’s somewhat limited to Trixie, Chloe and Linda but the fact she went from despising humanity to caring about a small number of humans is definite progress. 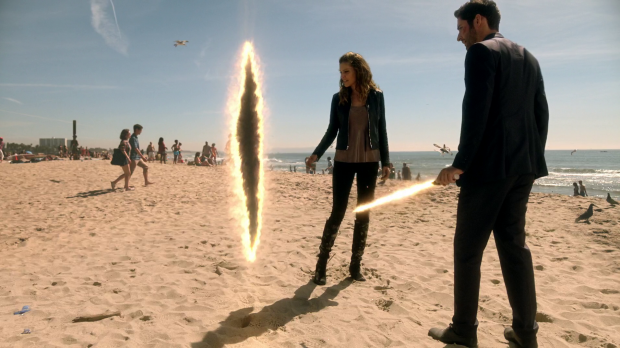 A door to nowhere

I’m glad Linda didn’t die in this episode largely because the death would have been shamefully manipulative. As I’ve said before her character isn’t really strong enough to have that level of emotional investment. If she had been defined by something other than her occupation and how that feeds into her interactions with other people then her death would have had weight but as it sits it wouldn’t have works. Even her mortal wound was all about Maze and how helpless she felt being unable to get help for her friend in time so a lot more work needs to be done on Linda.

Chloe’s role in the episode mostly focuses on the investigation but the idea that she’s getting closer to the truth is always present. Her scenes are more about her relationship with Lucifer and her willingness to hear the truth from him rather than actually being about her. The major roadblock at this point is around her lack of knowledge of the truth behind Lucifer. Once the show lets her in on the secret her character can be opened up to better stories but for now we’re somewhat stuck with the half truths and investigations which is somewhat limiting.

The episode ends on something of a cop out as Lucifer promises to tell Chloe everything before he’s knocked out and taken out to the desert. The most intriguing thing about this is that he has his wings back despite destroying them last season. I wonder if this is his mother returning his wings to him or if God is rewarding him for passing some kind of vague test. Either way it’s a striking image to end a season on and I really look forward to seeing what Lucifer has in store next season.

An excellent finale that brings the major storyline to a close in an emotionally satisfying way. “Charlotte” is really unhinged in this episode and it works really well as it ties into Lucifer finally realising just how dangerous she is. His approach is a really mature one as he realises that letting his mother back into Heaven would cause a War so offers her the chance to shape another reality in her own image which allows her freedom without the added issue of his family being harmed. Amenadiel’s childish excitement now that he realises he is his father’s favourite son whether that be accurate or not is really well played and I like that he gloats to a less than impressed Lucifer. Using improve as an outlet for his real emotions worked really well and it was a nice touch to diffuse that by having his outburst be nothing to do with the desired improv.

Maze doesn’t really take a step forward but the episode reaffirms her relationships with the other characters. Allowing Trixie to play Doctor and the concern she feels for the dying Linda shows that Maze has grown as a person and cares about others beyond herself. Linda still needs work as a character and I’m glad that she didn’t die because her being mortally wounded was more about Maze than her. Chloe’s scenes either deal with the investigation or with her relationship to Lucifer. There’s a sense that she may find out the truth soon but it doesn’t happen here and the ending feels like something of a cop out since Lucifer finds himself in the desert right after promising to tell Chloe the truth. The image of him standing with his wings is very striking though and I look forward to next season. 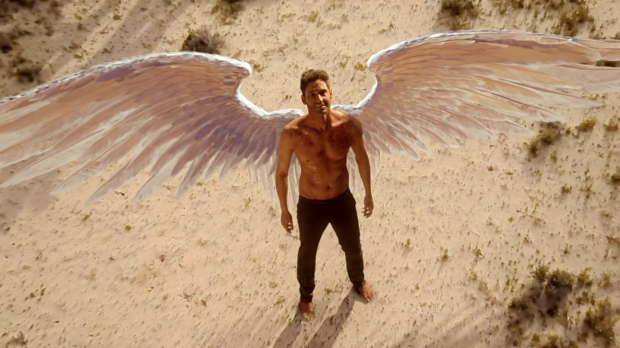