Lucifer returns for a third season and picks up right where the second season finale left off as Lucifer wakes up in the desert with his wings restored.

Season 2 of Lucifer was when it found itself as a show. The first season started off as a really ropey formulaic procedural that wasted the potential brought by its insane premise but the second season completely leaned into everything that the show could bring on a conceptual level. So far it looks like season 3 will be building on that to deliver further entertainment. 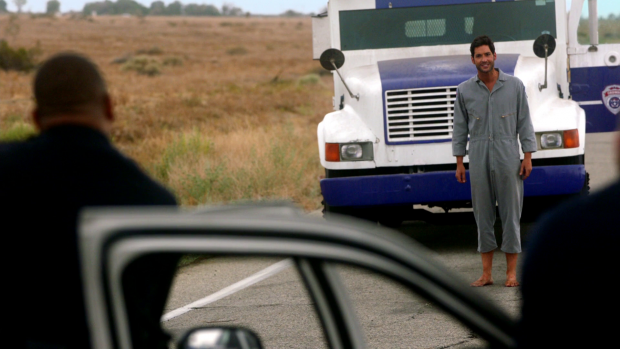 An unusual yet effective solution

The resolution of the cliffhanger ending very much fits the tone of this show with Lucifer happening upon a stolen armoured car being driven by the bank robber from the first episode of season 2. Some might say it could be divine intervention; others would say it’s a remarkable coincidence. Either way it’s a striking opening that solves the problem of Lucifer being stuck in the desert and rewards loyalty by bringing back a minor character seen before.

Lucifer’s automatic assumption is that everyone has been worried sick about him. The reality of the situation is that he was only gone for two days which isn’t enough time for him to be missed. Chloe is less than concerned and behaves normally around him creating a hilarious contrast between Lucifer’s narcissistic attitude and the way others see him. He believes that he is the centre of everyone else’s thoughts where Chloe has other priorities and hasn’t got to the point where she thinks about Lucifer’s absence after only two days of not seeing him.

Reuniting with Chloe is what kicks the case of the week into high gear. It turns out that there is a murder victim in the exact same place Lucifer wound up so his automatic suspicion is that the kidnappings are connected in some ways. Chloe’s focus is on the actual murder with only mild attention being given to Lucifer’s claims. She doesn’t believe that he was kidnapped which I found odd considering he’s normally honest to a fault and any previous dismissal of his outlandish claims had her proven wrong. Though the flip side to that is that he has appeared to mess her around on more than one occasion recently so Chloe might not be overly keen to believe him. This is all speculation as the episode sadly doesn’t spend an awful lot of time exploring Chloe’s reaction to all of this. She does react and it’s consistent with how she normally behaves but the attention is almost entirely focused on Lucifer where there could have been a good opportunity to dig deeper into Chloe as a character.

Lucifer is still committed to being honest with Chloe about what he really is and attempts to show her the “Devil Face” by way of a quick demonstration that she can’t possibly counter. Naturally it doesn’t work and she just thinks that he’s gassy due to the hilarious grunting and facial expressions he makes when trying to summon it. I find the drawing out of this conversation to be really tedious because the plotting is incredibly repetitive. The show is stuck in an endless loop of Lucifer trying to show Chloe what he really is and something getting in the way of it which causes Chloe to be annoyed and take an episode or two to forgive Lucifer. It’s almost as if the writers are afraid that Chloe knowing the truth would somehow break their relationship but they’ve established such a strong connection between them that it’s clear their interactions would be enhanced by this knowledge. Linda became a far more interesting character once she was in on the truth so there’s no reason the same wouldn’t apply to Chloe. 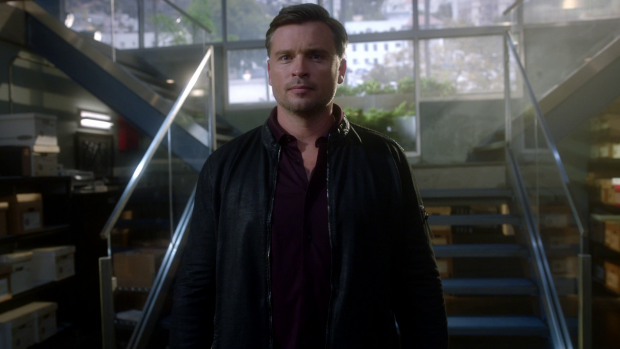 It’s a shame that Chloe’s main function in the show is to move the case of the week narrative along because any attempt to make her more than that mostly succeeds. She very much reverts to that role this week which is fine on a narrative level though it means that her contribution is almost routinely the least interesting part of the episode.

This case felt fairly mechanical though it was entertaining to watch. Lucifer and Chloe confronting Josh Hamid (Pej Vahdat) was a great scene because it almost breaks the fourth wall in how self referential it is. Josh doesn’t take this at all seriously because he recognises Chloe as the star of the often referenced teen sex comedy Hot Tub High School so can’t bring himself to take her seriously as a cop. Added to that is the fact that her partner goes by Lucifer Morningstar and it seems like an even more ludicrous situation if you happen to be an outsider new to this pairing. It also foreshadows the inevitable use of the sequel Hot Tub Hotel that Chloe didn’t star in so maybe there will be an episode dealing with that where Chloe has to confront one of her former co-stars in some way.

The reveal that the murderer is only a murderer by accident was an interesting one. It does involve Lucifer as the victim was only left buried in the desert because Sam (Michael Gladis) because he was so shocked at seeing Lucifer’s wings that he simply forgot how to do his job. On one hand it seems like a cop out explanation though it does track with earlier mentions of mortal reactions to encounters with divinity so it’s a win for internal consistency if nothing else.

Most interesting about this is the reveal of something darker at work. There is mention of a serial killer known only as Sinnerman who kills his victims in a brutal fashion. It shifts Sam from being a killer to more of a hapless idiot bystander whose biggest crime was working for someone he knew to be a brutal murderer. Lucifer’s closing monologue about the Sinnerman suggests there is something much more sinister at work involving his father so time will tell if this arc will go somewhere interesting. 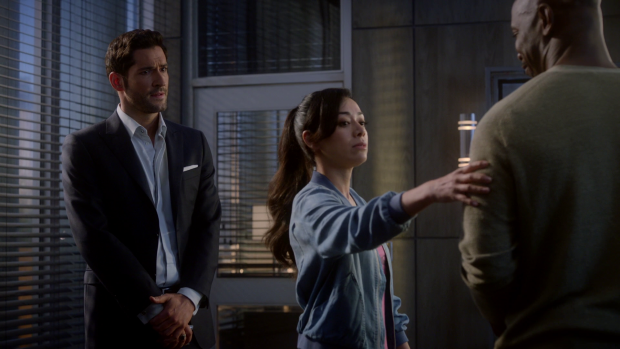 The return of Lucifer’s wings is largely left in the background for now though it does propel the plot forward. It’s also an interesting character beat for him as he sees them as an attempt for his father to prove that he is still in control where Lucifer’s arc has been all about forging his own sense of identity. The wings represent a setback on that front and he attempts to take control once again by having them cut off. Unfortunately they are immediately restored which suggests that God will always have some element of control over Lucifer or at least that’s what he believes. The reality is that God may not be involved at all and Lucifer’s wings may be connected to something else entirely. No matter what the explanation is it still allows the show to explore Lucifer’s daddy issues.

It’s also a great opportunity to develop Lucifer and Amenadiel’s relationship. Last season came with the reveal that Amenadiel was God’s favourite son and that’s something he has readily accepted. There’s a “born again” quality to Amenadiel in this episode as he comes around to the idea that their father has a plan and he trusts that he has a part in it. He sees the restoration of Lucifer’s wings and the loss of his “Devil Face” as a sign that his brother has been redeemed. If Lucifer can be redeemed then that means anyone can so that gives Amenadiel hope for the eventual restoration of his own abilities. Amenadiel’s outlook on this is interesting because it seems really naive yet his commitment to being a good son seems genuine enough and he approaches Lucifer non judgementally which marks a change in prior behaviour for him. It’s more than likely that Amenadiel is sadly mistaken but he has been prone to jumping to conclusions in the past so this is another interesting take on that.

Amenadiel’s renewed faith can largely be attributed to Ella who encourages him to look at the “mysterious ways” of God in a different way which leads him down the line of thinking he goes down. Ella’s presence in this episode was excellent with her obsession over the death of an innocent squirrel acting as a metaphor for the “mysterious ways” revelation. Roadkill might seem unimportant but the tire treads on the dead squirrel lead Ella to discovering who the suspect is so it allows Ella to explain that everything is important in some way depending on how you look at it. It’s a very obvious yet effective example and allows Ella’s wonderfully off the wall personality to spend some time in the spotlight.

A new season means a new character in the form of Lieutenant Marcus Pierce (Tom Welling); who fails to make a positive impression on any of the characters with his standoffish attitude. His introduction scene is great as it allows him to have a quick and meaningful exchange with everyone as well as suggesting that he is a vehicle for self referential comment on the nonsensical aspects of the show. His stern nature makes him more sarcastic than anything else and he fits in to the dynamic of the other characters perfectly.

Pierce references the case where 92 of Lucifer’s sexual partners were interviewed, Dan getting off easy from his dirty cop exploits and blatantly comments on Lucifer being both narcissistic and hedonistic. Their exchange is really entertaining and Welling definitely holds his own confidently. He also dismisses Chloe as being Lucifer’s partner which is the audience perspective on that dynamic even though in terms of the show’s internal logic he is a consultant who works with her. I look forward to seeing more of this character and speaking as a Smallville fan; it’s good to see Tom Welling on TV again. 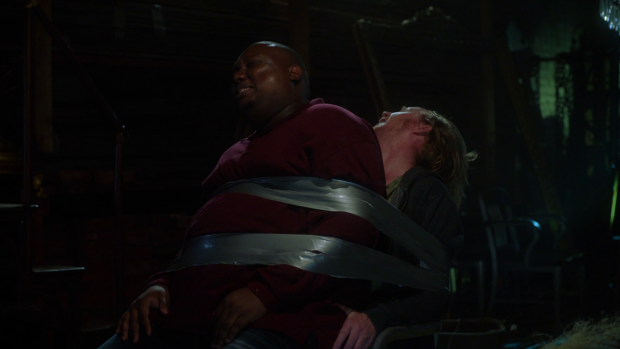 A creative method of torture

A strong opening to the season that asks more questions than it answers. Lucifer’s kidnapping leads into a mysterious serial killer plot that may or may not be connected to God in some way. The assumption is that it does but time will tell. Lucifer having his wings restored allows his relationship with Amenadiel to be explored in a different way to before. Amenadiel casts off his normally judgemental attitude though seems naively optimistic about his fathers plan and confident that it will lead to his own redemption. The introduction of Lieutenant Pierce is excellently handled as well and he fits into the show seamlessly.

Chloe isn’t treated as well as she could as the episode is typically repetitive when it comes to resetting their relationship. It’s frustrating to constantly see Lucifer ready to tell her everything and have something get in the way of that. It prevents their relationship from progressing and just retreads the same tired ground.