Supernatural begins its thirteenth season by picking up right where it left off following the birth of Lucifer’s child (Alexander Calvert).

The last episode of season 12 went a bit overboard with the deaths. Crowley died, Castiel met his end and Lucifer was banished to another dimension with Mary. Sam and Dean are left more alone than usual as they have no backup from their resident Angel or the King of Hell so they are very much left to their own devices. 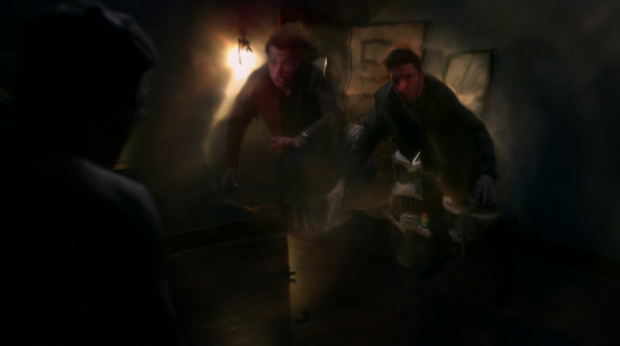 Lucifer’s son is the immediate problem and as always Sam and Dean have radically different approaches to dealing with a problem. Dean wants to rush in guns blazing to deal with him where Sam wants to take a more non threatening approach. Naturally Dean’s approach wins and it results in the brothers being knocked out as the 1 day old teenager goes wandering.

He eventually winds up at the local Sheriff who tries to figure out where he came from. He introduces himself as Jack which is great as it means I don’t have to keep calling him “Lucifer’s son” and is promptly shown the magical world of clothes  and candy. Eating candy is a simple yet effective way of humanising him and suggesting that there is more to him than his parentage would suggest. Jack doesn’t necessarily have to turn out to be an evil force as he clearly has free will and is able to make his own conclusions about the world.

Most of his screen time is spent with the Sheriff’s son, Clark (Rob Raco) who is close to him in physical age. Their interactions are fun to watch and Alexander Calvert plays the wide eyed innocence perfectly, It feels like he is experiencing everything for the first time and approaches everything with a wide eyed infectious curiosity. 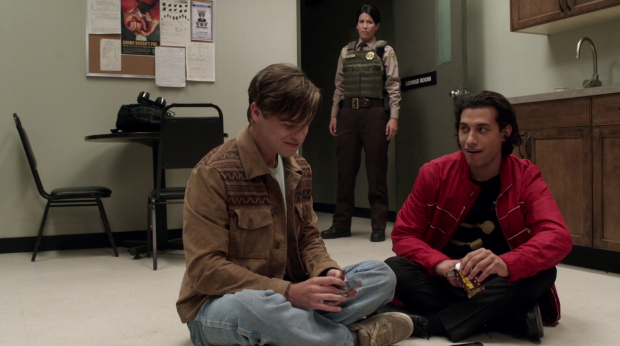 Sam and Dean eventually make their way to Jack’s location just in time for his abilities to cause all sorts of havoc solved by a well placed stun shot from Sam. This results in their arrest with Dean acting as their spokesperson for Sheriff Christine Barker (Andrea Menard). Normally Dean would try to introduce himself as a member of the FBI or some other government organisation but he’s clearly running low on patience and enthusiasm so starts right off with the truth. Naturally Christine struggles with what she is hearing and reacts with disbelief though the arrival of Angels quickly causes her to reconsider her scepticism.

Something about all of this actually feels very fresh despite the fact that this is very common storytelling for Supernatural. I mentioned in my review of last season’s finale that it looked like the show was heading for a more “back to basics” approach which may not be possible considering how far the show has come in its long life. It could just as easily work very well depending on the execution.

This episode feels very “back to basics” as it’s Sam and Dean investigating a threat of some sort, interacting with a few people native to the place they visit before leaving after solving the problem. It feels fresh as it has been a while since the show attempted this sort of storytelling without some form of Castiel, Crowley or another side character subplot to pad out the running time. There have been anomalous episodes here and there that stuck to the core characters but they feel few and far between. As such this episode feels fresh because it takes this approach while embracing all of the changes the show has gone through. Jack isn’t a standard threat with a one and done solution; he’s a character who has only just begun to develop and the case of the week very much involves this particular stage of his development. 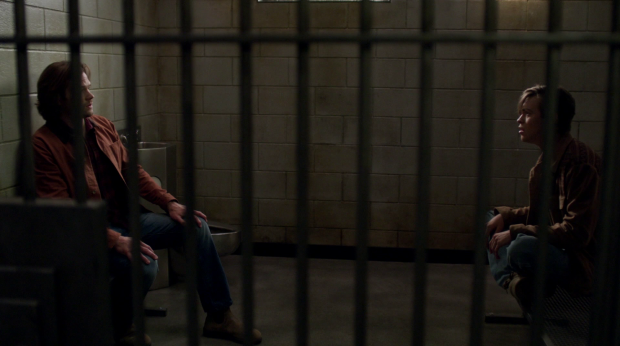 Sam gets to know Jack

Sam being the one put in a jail cell with him makes sense as he is always the one to show empathy for others. He talks to Jack, tries to understand him and makes up his own mind about what sort of person he is. We get an explanation for why he is a teenager despite only being a day old and it has to do with him sensing danger meaning being a baby would make him vulnerable. As one of the Angels says, he can do pretty much anything so it’s possible he might be played by an older actor later in the season if the occasion calls for it. I hope not as I like Alexander Calvert in this role but anything can happen at this point.

More is learned about him such as his viewpoint on the circumstances of his birth. He remembers his mother and clearly has an instinctive fondness for her which makes sense considering the connection they clearly had last season. The biggest surprise comes from the perception of his father. He denies that Lucifer is his father and mentions that he has chosen Castiel. His mother trusted Castiel and assured Jack that he would be the one to protect him so Jack has taken that promise and decided that Cas is his father. Sadly this presents a problem as Castiel is dead -at least for the moment- so can’t make good on his promise. We are told that Castiel is completely dead and can’t be brought back but I remain sceptical on that one.

Jack is someone that the Angels greatly fear which means that they try to kill him but he can’t be killed even by being stabbed through the heart by an Angel Blade. This also makes perfect sense as Lucifer can’t be killed that way either. Jack is still learning the full range of his powers and seems surprised at everything he is capable of. He’s unable to control the abilities he uses in this episode and they seem to be tied to his emotional state. Considering he ends up with Sam and Dean I suspect they will have the issue of dealing with an infinitely powerful stroppy teen which could have excellent entertainment value judging by previous attempts at comedy by Supernatural. 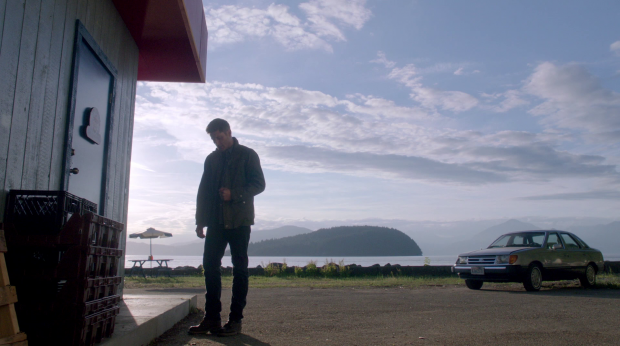 Dean prays for it all to be ok

The characterisation of Dean in this episode is very joyless. Jensen Ackles does a great job playing Dean as being defeated. He still recognises that there is still work to be done but the recent losses have deeply affected him. It almost makes all the deaths at the end of last season meaningful though those won’t completely be excused given how they were executed. The consequences for Dean’s emotional state are really interesting to watch as it inspires the viewer to think about what drives Dean and what it will take for him to find the strength to keep going.

He goes through a variation of the five stages of grief throughout the episode though not exactly in the standard order. Denial and bargaining are largely combined in the scene where he prays to God to restore all that has been lost. It’s a really great scene where Dean shows vulnerability when nobody else is watching. He is emotionally exposed and really needs God to hear his words. When his prayers go unanswered this results in anger as obviously shown by him punching a door repeatedly. His depression is fairly obvious throughout the episode but the acceptance comes when he decides to allow Jack to come back to the bunker as it shows a desire for Dean to find a way to move forward. Another part of that acceptance comes when he gives Castiel a Hunter’s funeral in an emotionally resonant scene.

Sam is a lot more pragmatic in his approach. It appears that he pushes his grief aside because there is still a job to do and he keeps his trademark open mind when he chooses to make his own mind up about Jack rather than believing that he’s evil right away. Sam has less of the focus than Dean does in this episode but his role is an important one.

This episode suffers somewhat in the pacing. When it does get around to the various plot elements it’s very good but there are long stretches where very little of interest happens. An extended scene involving undercover Angel (Carlena Britch) generally being irritating around Dean is fairly painful to watch and the focus this character is given is unnecessary considering how ineffectual she becomes in the action climax. Anonymous Angels attacking would have been more than sufficient. 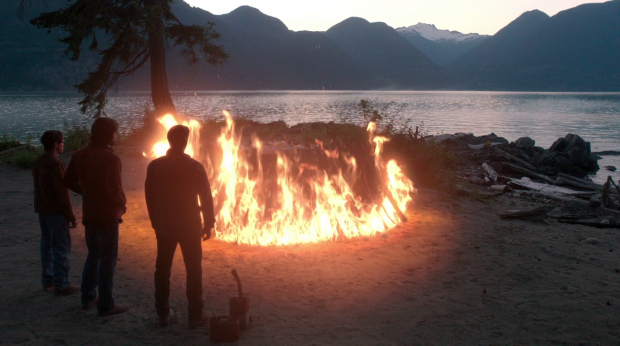 A Hunter’s funeral for Castiel

An excellent opening to the new season that focuses on the newborn Lucifer’s son and establishes him as being capable of becoming his own person. The time spent developing the character as someone who views the world with childlike wonderment works really well and Alexander Calvert does a great job in the role and I look forward to seeing how the character progresses. Dean is very much a broken man after all the losses he has suffered with lends validation to all of the deaths at the end of the last season. He goes through the five stages of grief in a less than conventional order throughout the episode with the scene where he prays to God being the standout. Sam takes a more pragmatic approach and focuses on the situation but gets less development than Dean.

As good as the episode was there were long stretches where very little happened and a scene involving an undercover Angel is somewhat painful to watch. Despite that it was a great start to the season that suggests a more “back to basics” approach this time out.