“The Assassination of Abraham Lincoln”

The second episode of Timeless picks up where the first episode left off with our main cast of heroes still in pursuit of Flynn this time heading back to the night of Abraham Lincoln’s assassination and the moral dilemma of whether to prevent it or not.

This weeks time is in is set in 1866 the year Abraham Lincoln was assassinated and the team have to prevent Flynn from helping John Wilkes Booth (Kelly Blatz) from assassinating Abraham Lincoln. Whilst looking for Flynn and John Wilkes Booth they come across the co-conspirators and Lucy pieces together that Flynn is also there to help them assassinate Vice President Johnson, Secretary of State Seward (Peter Hall) and General Ulysses S. Grant (Terry Hall) in order to change the course of history. The team split up and each try and save the targets that were meant to live. All through out this episode each character has a moral dilemma over whether to save the President or not. This is essentially the heart of the episode – Would you change history if you could? 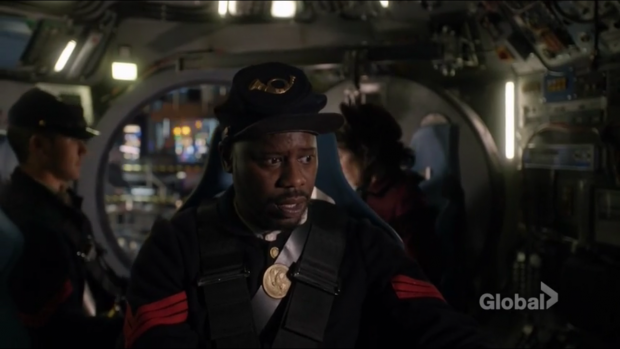 Rufus has a lot on his mind during this mission

Lucy is the main character of interest this episode again starting with learning that her sister no longer exists then finds herself becoming a part of history again.  There is an interesting moment between Flynn and Lucy in the train station where the talk about the effects of the Hindenburg and about “Rittenhouse” which seems to be a secret organization but little else is known but I’m sure it will unravel as the series progresses.

Being a historian who has been thrust into history itself shows Lucy the humanity of the people behind the events. This week she sparked an almost romance with Robert Lincoln (Neil Bledsoe) which I felt was brought on due to her losing her sister and knowing that Robert would soon lose his father so could empathize with this situation. It also affected her mission to make sure president Lincoln (Michael Krebs) was assassinated. This lead to a heated discussion with her team on who they can or cant save in history? In the end Lucy did the right thing but was torn about her decision as it affected Robert who she cared for and meant she could not save someone she really admired. By the end of the episode Lucy is starting to realize the implications of time travel and how each action she takes affects the future. These decisions are starting to take a toll on her and I sense she is becoming disenfranchised with the idea of keeping the timeline the same.

This could be what leads her to write the diary that Flynn has which is written in her own hand writing. Watching this develop through out the series should be good to watch as we will find out if Flynn’s ‘threat’ that she would end up helping him at some point will come true. A small note of mention is the fact that even though Lucy in her new timeline still exists and her sister doesn’t it is because of the fact that Lucy and her sister don’t share the same father, this twist will most likely be explored in the upcoming episodes. 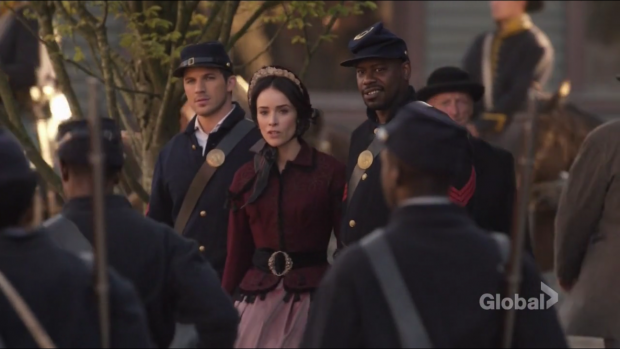 Wyatt on the other hand still seems to be the hired muscle military type with his dead wife being one of few defining characteristics. He brings this up as much as possible and seems a played out trope in television terms but with any luck he will develop more as the show progresses. His scenes aren’t that impactful for the most part as he is there, gets shot, gets into a fight and not much else. At this point the character is more there for the action scenes but in the first episode had more of a role with trying to save the reporter who looked like his dead wife and had more dimension to his character. He does seem to challenge Lucy on her assumptions so hopefully the shoe will make more of that.

Rufus is again put back into a time in history where he is forced to deal with his race and how things were in those time. His encounter with the soldiers is quite a moment as well. They approach Rufus thinking he is a sergeant and can read and write so they ask him to help them write notices to find their families who are scattered. They are most likely slaves. When the soldiers notice that Rufus’s re-enactment uniform isn’t quite up to par they start on him making Rufus feel ashamed for impersonating a soldier and knowing the hardships those soldiers would face. It motivates him to want to change history for the better which brings up some questions of whether you would change history to make it better but the consequences are unknown.

I feel like Timeless could dig into some real issues and ask some deep and meaningful questions on these subjects if it chose to but right now it is just scratching at the surface but we will see where this goes. There is also the back and forth between Rufus and Connor Mason and his spying mission isn’t really explained as of yet but it is already putting tension on Rufus as it is not in his character to lie to people. 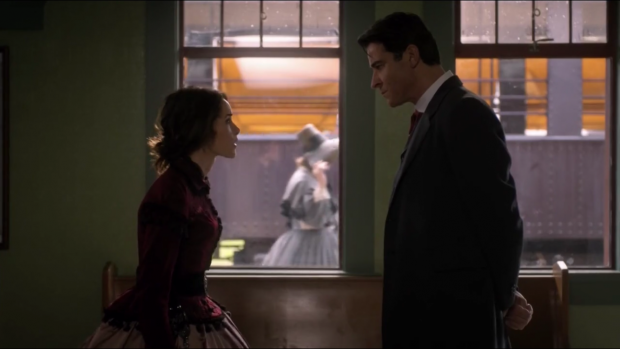 Lucy and Flynn confront each other again.

Timeless‘ second episode ‘The Assassination of Abraham Lincoln’ seems to set the tone for the show which is going to be a Case of the week with an over arching plot revolving around the main villain Flynn and the secret organization of Rittenhouse. Its not a bad concept to have as it will give the show time explore lots of time periods in its first season. The team seems to be getting along a little better now and are realizing they only have one shot to save history and there is consequences to their actions.