A quest to lose his virginity becomes deadly for a man and his friend when two beautiful women are more than they seem in Benjamin Barfoot’s Double Date.

The movie follows Jim (Danny Mogan) and Alex (Michael Socha), two friends that are very different from one another. Jim is shy, a little awkward and has had bad luck with girls in the past. Alex is very much the opposite. He’s confident to the point of being cocky, appears to be a serial womaniser and all too quick to suggest doing something wild for the sake of an experience to be talked about.

Together they hatch a plan for Jim to lose his virginity before his 30th birthday which is mere days away by the time the film starts. This looks very possible when they meet two beautiful women who aren’t against the idea of socialising with them. Kitty (Kelly Wenham) is the Alex equivalent in that she’s confident and takes charge where Lulu (Georgia Groome) is more like Jim as she is far more reserved. 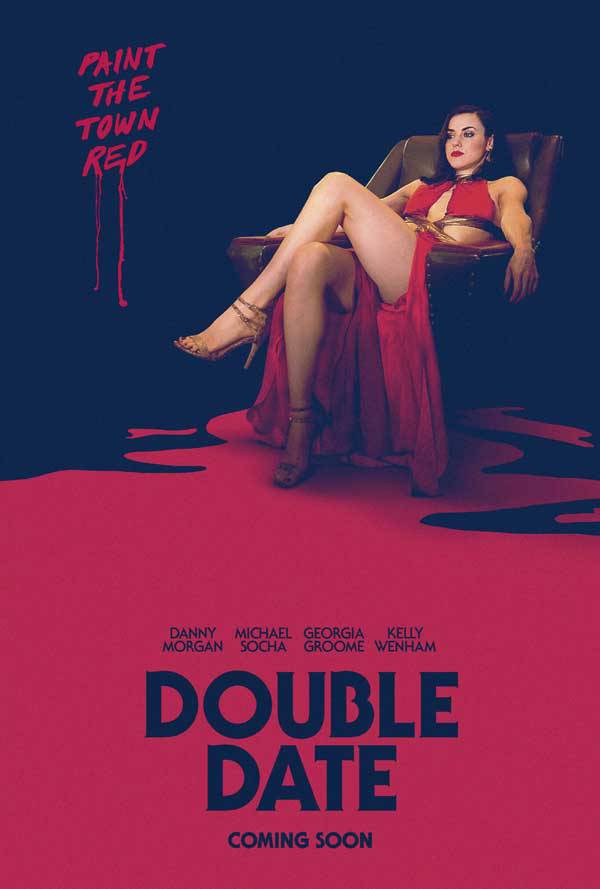 It’s made clear very early on that this encounter is too good to be true. The girls have a hidden agenda that involves them dressing up so that they can use their beauty to lure unsuspecting men into their trap so they can carry out their plan. What that plan is I won’t spoil as it doesn’t pay off until the end but it’s mostly an excuse to create comedic situations.

Of course comedy is entirely subjective but I had a great time with this. More of the jokes land than don’t and the film completely sucked me into its particular brand of lunacy. The dialogue between Jim and Alex is sharp, witty and suggests a friendship that has existed for a number of years. As characters they are somewhat thin but there are developed more than enough for the purposes of this story. Jim in particular has a lot to endear himself to the audience coming across as a decent guy who just doesn’t seem to have much luck. Alex is a much shallower character but Michael Socha makes it work.

The girls don’t fare quite as well. Much of the film centres on the mystery surrounding their plan as they deftly play the pronoun to keep the viewer from learning the details until the very end. As such there is little opportunity to develop them or their motivations. They are established as being untrustworthy and the way they string along their hapless victims provides a lot of entertainment.

This film is technically a comedy horror but it’s actually very light on the horror content. There are teases throughout that help to build the sense of mystery surrounding the girls but for the most part it leans into comedy. Most of this is mined from just how oblivious the guys are despite how obvious it is that the whole thing is too good to be true.

Despite the strong comedy and competent characterisation the experience does drag a little. There are a lot of moving parts to the plot and it doesn’t always hang together as well as it needs to. The middle section could have been trimmed significantly to cut out some unnecessary plot points and beef up the mystery aspect that all but disappears before returning.

Once the film navigates the problematic middle section it culminates in an ending that is wonderful in its lunacy. It feels like a satisfying pay off to everything that has been building across the film and it’s immensely entertaining to watch.

A fun comedy horror experience with strong characters, solid performances and a story that more or less hangs together. The film leans more into comedy than horror and focuses on the mystery surrounding the “too good to be true” side of the situation. Things do start to drag in the middle section of the film but it culminates in an ending that is wonderful in its lunacy and is just immensely entertaining to watch.