A frustrated wannabe emo struggles to find himself when enrolled at a new school in Neil Triffett’s Emo the Musical.

I’ll start this by saying I know next to nothing about emo culture. It wasn’t really a thing when I was at school so any knowledge I have comes from cliché ridden anecdotes that I’ve come across when consuming media in one form or another so I’m far from an authority on the “authentic” emo experience.

Thankfully authenticity seems to be furthest from the mind of those involved in this film and it’s definitely all the better for it. The cliques portrayed are very surface level which works well because there are a lot of them. It’s down to the characters to prove why they belong or don’t belong to the various groups which allows the film to provide effective commentary on what people do to belong.

Ethan (Benson Jack Anthony) is our window into the story and he’s established as very confused right from his introduction. He really wants to be an emo so adopts the style and the mannerisms but talking the talk isn’t enough since he fails to walk the walk. A failed suicide attempt gets the story moving as it causes him to be expelled from his previous school and be enrolled in a new one. 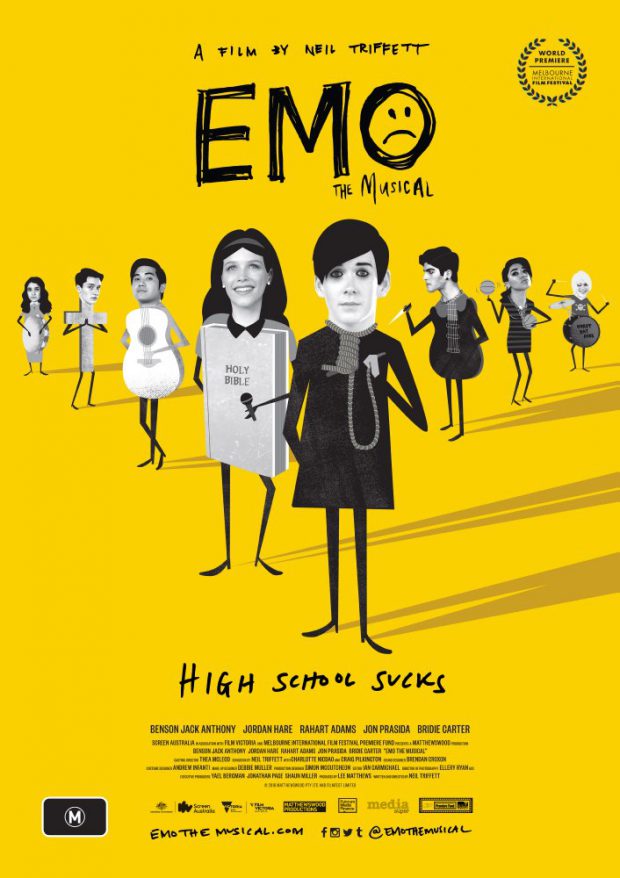 The new school is almost cartoonish in the way it works. I’ve already mentioned the broadly defined cliques offering a simple yet elegant way to build a picture of where the characters are supposed to fit. The school is subsidised by a pharmaceutical company offering free samples of serotonin boosters to keep the students and staff in line. It offers some explanation for the bizarre behaviour but doesn’t entirely justify it. Part of the charm of the film is to just go with the world it creates. the hyperreality created by the intermittent musical numbers helps with this but the larger than life characterisation is instrumental as well.

Almost immediately Ethan finds his sense of identity challenged by a blossoming relationship with a devout Christian girl named Trinity (Jordan Hare). Their romance is vaguely reminiscent of Romeo & Juliet with the vastly different cliques standing in for the feuding families as they are forced to navigate a sea of non acceptance as they try to deny their feelings for one another.

Ethan is a really endearing character played well by Benson Jack Anthony. He’s misguided to a hilarious degree and a lot of the comedy comes from the fact that he’s completely ignorant of the obvious. Jordan Hare does a great job playing the naive innocence of Trinity while hiding rationality and intelligence. Together they have great chemistry and their scenes together are enjoyable to watch.

The supporting characters are also memorable such as Ethan’s bandmates Bradley (Rahart Adams), Roz (Lucy Barrett) and Jay (Ben Bennett) who all have their own quirks to bring to the insanity. The rest of the memorable characters are too numerous to list but pretty much everyone has a moment to shine and a unique twist around their association to a particular group.

A musical is nothing without songs and the music featured in this film matches the tone perfectly. There are some standout numbers such as Trinity positing that Jesus would have been an Emo and the over the top lyrics from the film’s resident Emo band “Worst Day Ever” are on the nose but hilarious.

At times the film can feel like there is too much going on. There are a lot of characters and some of them disappear for long enough to be forgotten before they return for the scene that acts as their pay off. A tighter story focusing on a handful of misunderstood teens might have come over better.

A simple, elegant and hilarious musical story offering meaningful commentary on the nature of identity in high school and the absurd lengths people go to just to fit in. Ethan is a really good character to follow and his forbidden relationship with Trinity works really well. The world the film inhabits is appropriately larger than life with clear lines drawn between the groups. Many of the featured songs are cleverly written and very catchy with some standout numbers among them. Despite many of the supporting characters being memorable the film sometimes feels like there is too much going on which makes it easy to lose characters in the din.