Stanley Tucci spends some time behind the camera as writer and director of a small period of time in the life of eccentric Swiss artist Alberto Giacometti.

Taking place over a matter of weeks, this film is all about how Giacometti is seen through the eyes of the subject of the the portrait that would turn out to be his last. Writer James Lord (Armie Hammer) is our window into the life of the artist and his commentary on what he observes about the man fuels the narrative in different ways.

Initially Lord is assured the portrait will take hours which then turns into days and stretches out over weeks. The film trades in frustration which builds over the course of the running time. Lord constantly changes his travel plans to accommodate Giacometti’s increasingly erratic schedule and he becomes more irate as it appears the portrait will never be finished.

Lord takes this all in his stride and constantly changes his plans so that he can continue to observe the greatness of a man he admires despite the fact that he has to spend a long time sitting still and listening to him prattle on endlessly without actually devoting much time to the portrait. Armie Hammer is good in the role with a lot of subtlety to his performance as his patience is constantly tested. On the surface he is being accommodating but inside he’s screaming. It’s a shame the narration has to spoil this as it was abundantly clear from the way Hammer plays the character. 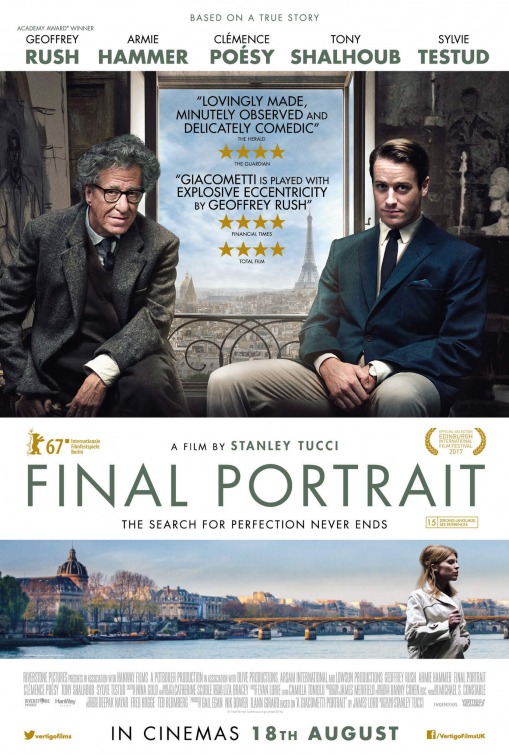 Geoffrey Rush plays Giacometti with a eccentric unpredictability. It’s difficult to tell when he will be aloof and when he’ll be focused. This randomness keeps the film ticking along despite a thin plot and there are lots of amusing moments throughout.

Giacometti is portrayed as a really complex man who has a lot of self doubt. The portrait takes so long because he constantly abandons it to start again because he genuinely doesn’t believe that what he does is any good. His scatterbrained attitude is largely down to this inferiority complex that prevents him from ever being able to appreciate his own work. Combine that with his unique insight on the world he lives in and Geoffrey Rush has ample opportunity to show just how talented he is in bringing these different facets to the fore.

It’s very much a character study which means that there isn’t an awful lot of plot but Tucci’s direction manages to keep things moving despite the very thin narrative. The tone is kept light and fluffy which allows Giacometti to appear larger than life while also being a grounded and damaged human being. An abundance of levity gives way to strong emotional moments when the need arises and the comedy never overwhelms the experience.

The relationship that builds between Lord and Giacometti is a joy to watch. Their interactions sometimes feel somewhat banal but there’s a lot of subtext to them that is interesting to take a closer look at. Much of Lord’s part of the conversation is geared towards getting the man to work so that he can finally leave where Giacometti seems content to let the portrait take forever partly because he enjoys the company of the younger man.

Other characters don’t fare quite as well. Tony Shalhoub’s Diego Giacometti could have largely been done without though there was potential for him to be a lot more prominent than he was. The two main female roles; Annette Arm (Sylvie Testud) and Caroline (Clémence Poésy) also don’t fare very well. They dip in and out of the narrative without ever contributing anything worthwhile.

A solid character piece that manages to be engaging throughout despite a really thin plot. Geoffrey Rush does a great job as the eccentric Giacometti and Armie Hammer delivers a lot of subtlety in his performance as someone trying to remain calm while growing increasingly frustrated. The film takes full advantage of the strong relationship that develops between them and keeps the tone light for the most part though rises to strong emotional moments. Some unnecessary narration and side characters that weren’t needed drag things down somewhat but on the whole this is a charming watch celebrating one of history’s greatest artists and allowing talented actors to show what they are capable of.