Carl (Toby Jones) lives alone, has little in the way of possessions and lives his life with very little human contact. Initially we see that he has a close friendship with his neighbour Monique (Cecilia Noble) but that seems to be about it for him.

This does change when it is revealed that he has decided to dip his toe into the world of online dating and is visited by the young and outgoing Abby (Sinead Matthews). Their early conversation has dialogue that is really fascinating to listen to and a strong sense of character delivered through excellent performances from Toby Jones and Sinead Matthews. The fact that they appear mismatched is almost comedic which gives the conversation an extra layer of awkwardness.

From here the film becomes more disturbing as Rupert Jones expertly blurs the line between reality and imagination to the degree that it’s unclear where one ends and the other begins. This is further complicated by the arrival of Carl’s mother Aileen (Anne Reid) who causes him to descend into panic and rage at the clearly unwelcome presence in his life. 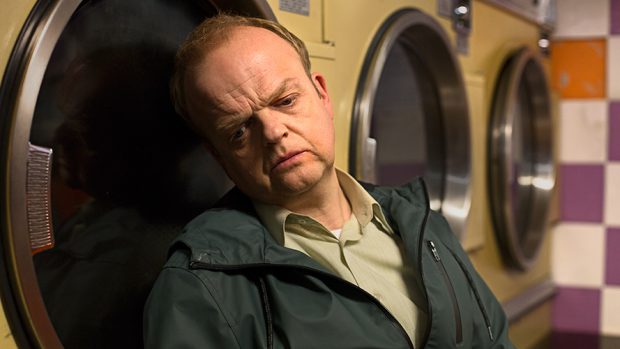 Toby Jones completely nails his performance throughout. Much of the running time is spent with him alone which is a big task for any actor but he completely rises to the challenge. He does so much with body language and facial expressions with the frantic way he tries to tame the situation that continues to spiral out of control. There’s enough mystery to Carl to keep the audience on their toes but he is also fairly well defined. The sense of who he is comes across while the details of his past and present remain something of a mystery. It’s a great way to keep the audience engaged in the character while also being really confused.

Carl’s relationship with his mother ends up becoming the focus of the film for a long time. Her presence greatly distresses him and he’s torn between his desire to get rid of her and the sense of decency that he clearly possesses. Little is given about what caused the relationship to fall apart but there are enough clues dropped to make a reasoned guess.

Narratively it can be quite difficult to follow which I suspect is the point since the story seems to be built on confusing the audience. At its core this is a mood piece and everything contributes to that. The setting itself is cold, dark and uninviting with lots of uncertainty around what will be found behind the doors and various props are used to great effect to back all of this up.

The narrative is somewhat let down by a mid section that could have been tightened to make the tense atmosphere even more palpable. It never meanders but there is some repetition here and there that wasn’t really necessary. Maybe another pass in the editing room will help to perfect the experience.

An excellent psychological thriller that draws the audience in and expertly blurs the line between reality and imagination. Toby Jones delivers an excellent performance as he navigates the cold, dark and uninviting location. He spends much of the film alone but carries so much using body language and facial expressions. The infrequent conversations the film provides are wonderfully written and give a clear sense of character to those involved. The mid section could have been tighter will less repetition of things that were already well established but this is a stunning thriller experience.