A famous writer interviews men to decide who will be a suitable heir for her after she takes her own life in Zachary Cotler and Magdalena Zyzak’s Maya Dardel.

This film deals with controversial issues with the most apparent being suicide. Maya (Lena Olin) has made what appears to be a rational choice to take her own life simply because she is tired of living. There’s a suggestion that the weight of expectation surrounding her career as a writer is a factor as well. Whether the expectation exists or not Maya feels that the public are expecting another classic novel or collection of poems from her.

Suicide may be the reason the events of the film happen but it remains ambiguous whether Maya actually intends to go through with it or not. The character is written with complexity and Lena Olin’s performance is nuanced enough that she could be serious or may just be using it as an excuse to toy with young men who have aspirations of becoming a writer.

Roughly the first half of the film focuses on these interviews before focusing on the finalists. The interview scenes are the most interesting part of the film as a range of characters are seen and plenty of insight is given to Maya’s character as she interacts with different people. Her personality is clearly established and there’s plenty to dislike about her as she spitefully puts the eager young men on the spot for what appears to be her own amusement. Maya likes to be in control as shown by the way she frames the conversations and the sexual favours she makes the men perform for her. 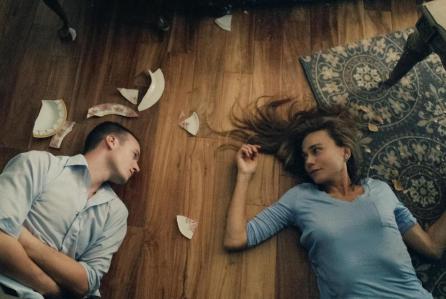 Maya is very twisted but that’s also what makes her so fascinating. Not much about her past is revealed because of her desire to keep herself isolated from those she talks to. The impression is that her experience of life has been a bitter one but we have no idea why. The conversations are sharply written to conceal as much about her as possible while offering revealing looks into the minds of the men she interviews. Dominance and power are the central themes here and they are expertly developed through these conversations.

This theme continues into the second half when she narrows down the options to Ansel (Nathan Keyes) and Paul (Alexander Koch). Everything Maya does is about controlling the relationship she has with these men and they both represent two very different reactions to her behaviour. Ansel is more understanding and Paul is more confrontational. It makes for an intriguing outlet for Maya’s particular brand of analytical wisdom but it’s a lot less interesting than the first half of the film. The idea of Ansel and Paul is interesting but the characters themselves aren’t. This is mostly because Maya’s personality is so overpowering which doesn’t leave much opportunity for the other characters to develop despite the shades of potential that come through.

As good as this film can be it comes across as very pretentious. Almost every line of dialogue is written as if a profound statement is to be made. At times the dialogue feels clunky because of this and there is a particularly extreme plot point that just isn’t necessary.

An interesting if pretentious portrait of a character who likes to keep control of everything around her. The first half of the film where the titular character interviews prospective heirs is far more interesting than the second half where she manipulates the finalists. For the most part the dialogue is sharp and clever but often crosses the line into being pretentious with every line delivered designed to make a profound statement about something. It’s an engaging watch if not completely satisfying.