A young couple are tested when they are forced to face the realities of adulthood in Daniel Jerome Gill’s Modern Life is Rubbish.

Liam (Josh Whitehouse) is a penniless musician who has dreams of taking the country by storm with his music. His ambition is simple yet clear; he wants to be in a successful band so that he can enjoy the fame, notoriety and money that he feels the expression of his artistic vision deserves.

Coming with him on his journey is Natalie (Freya Mavor) a wannabe designer and fellow music enthusiast who wants to have her designs seen by millions on the front of albums. Their relationship is born out of passion and fuelled by their shared youthful dreams to the point where they feel that they can accomplish anything together.

As you might expect this works for a while but eventually real life complications like paying rent and planning for the future start to creep in to drive a wedge between them. The main conflict between them is their difference in opinion over what is important in life. Natalie thinks that they both have to think realistically about their lives and make sure that they are comfortably able to pay their bills where Liam is fixated on his self righteous belief that conventional society is something he constantly needs to rebel against.

Natalie is constantly frustrated with his inability to hold down a job and his general directionless attitude while Liam is deluded into thinking he’s the next big thing just waiting to be discovered. It’s a well developed rift between them that is played genuinely from both actors. Liam and Natalie are both convinced that they are right and are unwilling to give any ground especially since Natalie has given up on her own dream so that Liam can pursue his.

The structure of the film is really interesting. It starts off in the present day with Liam and Natalie having already broken up and starting to pack up the place they live in to part ways. As this is happening there are periodic flashbacks to what brought them together and what ultimately drove them apart. It’s a simple structure but it clearly shows the development of their relationship from something passionate and “perfect” to something that no longer works. It also makes the early days of the relationship come across as bittersweet as the audience already knows where it ends up. 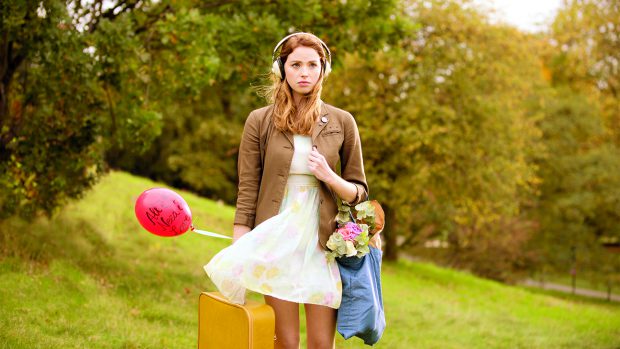 Another thing the film excels at is characterisation. Liam and Natalie are consistently handled throughout and the relationship as well as the break-up is well written most of the time. Many of their conversations are underpinned by really bad dialogue that doesn’t feel like it would be part of a real conversation but the actors are able to sell it.

Where it falls down is in how the characters are handled. Ideally both sides of this argument should be valid since it’s a difference in point of view but I found it very difficult to invest in Liam’s side as I though he was clearly in the wrong throughout. He comes across as selfish, delusional and his elitist attitude is really off putting. Long speeches about how conforming to corporations by owning an iPhone and sucking the soul out of the music industry with digital media did nothing to endear him to me so I found it difficult to root for him to win Natalie back. Her point of view seemed far more reasonable to me so Liam wasn’t the best protagonist.

Liam does go through something of a redemptive arc but it isn’t strong enough nor is it especially believable. His attempts to change himself come so late in the film that they don’t quite land and the ending feels ridiculously sentimental which is actually at odds with the bulk of the film.

Not that the rest of the narrative is bereft of sentimentality. There is actually a lot of it throughout and it comes across as cheesy a lot of time. Sometimes it’s endearing thanks to the ability of Josh Whitehouse and Freya Mavor to deliver the emotional connection of their characters but there are sequences that look like they are shot through an Instagram filter and they feel completely at odds with the grimy appreciation of “real music” that the film is supposedly going for.

Other characters make an impression throughout the film. Ian Hart is endlessly entertaining as a self appointed music guru for Liam’s band. His no nonsense approach to delivering feedback and unique style make him an engaging presence and there’s a particular scene that casts him in a different light towards the end.

Adrian (Tom Riley) serves as Natalie’s rebound and he’s very much treated as being expendable. It’s clear what the purpose of his character is and exactly how his role in the story will end up. Outwardly he seems like a decent guy but he’s so bland that Natalie will obviously never be happy with him. It’s shallow, obvious and could completely be done without.

The music used in this film mostly managed to feel appropriate though connection to it will entirely depend on your personal tastes. There are some memorable original songs given to Liam’s band and the soundtrack generally fits the mood of the scene it is placed in.

A solid if uneven film that uses an interesting structure to chronicle a break-up. Using the present day as a framing device to flash back to the beginnings of the relationship and show what made it break down is a great idea that works really well. It’s very cleverly done and makes the early days of the relationship feel bittersweet since the audience knows what’s coming. One of the issues the film has is with how the break-up is presented. In theory both sides of it should be relatable but Liam comes across as being selfish and delusional with an elitist attitude that doesn’t endear him to the viewer. He talks about rebelling against corporations and fixates on his own self righteous beliefs. Out of the two of them, Natalie’s position seems the most reasonable especially considering she compromised her own dreams to support her boyfriend.

Liam does go through a redemptive arc but it’s not strong enough and culminates in an overly sentimental ending that feels at odds with much of the rest of the film. Other characters make an impression such as Ian Hart’s self appointed music guru. Tom Riley as the rebound boyfriend fails to make an impression as his purpose is very shallow. The use of music in the film manages to feel appropriate though whether you find it effective or not will be entirely down to personal taste. I would say that the soundtrack tends to fit the scene it is used in and there are some impressive original songs.