With Pilgrimage director Brendan Muldowney (Savage, Love Eternal) has managed to gather together a very impressive cast for a story that might have some difficulty in finding an audience, and that is a crying shame as this is an excellent piece of work. Set in 13th Century Ireland it tells the story of a small band of monks that are tasked with taking a holy relic to Rome on orders from the Pope. This will take them across lands ravaged by clans fighting with the Norman invaders, all whilst dealing with inner tensions within their group brought about by the religious fervour and cultural ignorance of the Cistercian monk, Brother Geraldus, played excellently by Stanley Weber (Outlander, Not Another Happy Ending).

Our main point of reference to this small tale is Brother Diarmuid, a novice and an innocent, never having left the monastery. It’s a tough role to play, and Tom Holland (Captain America: Civil War, In the Heart of the Sea) excels, showing the journey of Diarmuid both physically across Ireland, and mentally, as he comes to question all he knows, with a maturity lacking in many other young Thespians of his generation. He is aided by a very strong supporting cast, most notably John Bernthal (Baby Driver, Fury) as the Mute, a mysterious lay-person, atoning for his sins at the monastery, and sent along on the journey as a servant. Bernthal only utters one line in the entire movie, but his performance is mesmerising and you never doubt the relationship he has with Diarmuid. The friendship and fatherly care he conveys with not much more than a look fires the story along, and is a joy to watch. 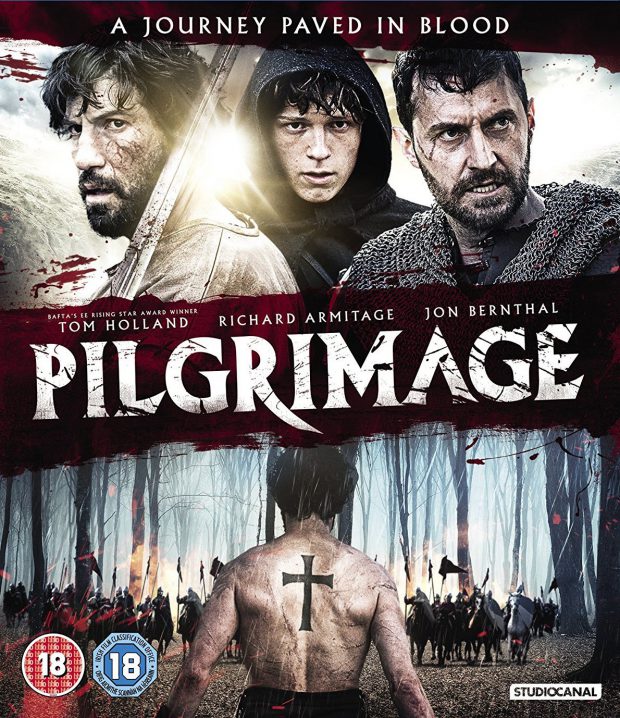 In terms of the acting cast, I really must also mention Richard Armitage (The Hobbit Trilogy, Captain America: The First Avenger). He plays Norman nobleman Raymond De Merville with such delightful lip curling spite that he is joy to watch. A character who obviously hates the place he’s been forced to inhabit, and takes it out on all around him, Armitage plays him with such intensity that he neatly sidesteps what could have been nothing more than a scenery chewing performance.

Speaking of scenery, Muldowney uses it, and my, how he uses it. Ireland becomes a character in this movie in its own right. Sweeping shots of the party as they travel across the landscape are breathtaking, and are shot with such artistry that the actors are mere figures in a moving landscape painting. The weather can at one minute add a shot of light to a scene, then the next hide the characters in swirling mists, and the film glows from this influence.

There are one or two nit-picking flaws to this wonderful little film. In fact, that is one of them, it can feel quite small at times with the tight-knit band that have been brought together for the filming. This is probably most notable towards the finale, when our band must face off against a group of antagonists of a roughly equal size. With the scope of the landscape, the numbers feel a little lost in the grandeur, but this really is me looking for something to criticise. The only other real criticism I could place at the feet of Pilgrimage is that there is a little bit of a lack of consistency to the character’s motivations and logic. Some characters seem to be very modern in their questioning of religion, whilst others are much more period appropriate. Again it’s a small point, but I did find myself pondering on it.

Muldowney has pulled off something spectacular on a shoe-string budget with Pilgrimage. The action is tight, compelling, and very brutal, easily earning its 18 certificate. The cast are universally strong, and the story is fresh and compelling, and even has something relevant to say about religion today. The cinematography is beautiful, and the script is strong and enjoyable, and the flaws are effortless to ignore when taking into account the accomplishment that the movie is in its whole. If you get a chance, and you want a gritty period drama, with some outstanding performances, it’s worth making a Pilgrimage to the cinema to see this.