A retired businesswoman re-evaluates her life after tasking a writer to come up with an obituary worthy of her as she sees herself in Mark Pellington’s The Last Word.

It’s pretty clear what sort of film this is going to be from pretty much the first minute of screen time. Harriet (Shirley MacLaine) is an old woman who is obsessively set in her ways and has an unending desire to control every aspect of her privileged life. Early on she is seen showing the gardener how to do his job and the examples keep coming from there. She likes things a certain way and will do whatever it takes to make sure that her demands are met.

Her attitude means that those who come into contact with her don’t like her very much. She’s blunt to an offensive degree, uncompromising and has more than a hint of a nasty streak about her which means that people don’t want to be around her. The story properly begins when she reads the obituary of an acquaintance and starts to wonder what hers will say about her. To find out she hires local writer Anne (Amanda Seyfried) to pen a pre-mortem obituary so she can see the words that will encapsulate her accomplishments.

Anne’s research into the life of Harriet is one of the more amusing parts of the film though the writing is consistently sharp and funny. Each interview is almost worse than the last in terms of how people see her and Anne’s growing frustration comes through well. Her challenge of writing something kind about someone universally disliked carries the early part of the film and propels the narrative onwards. 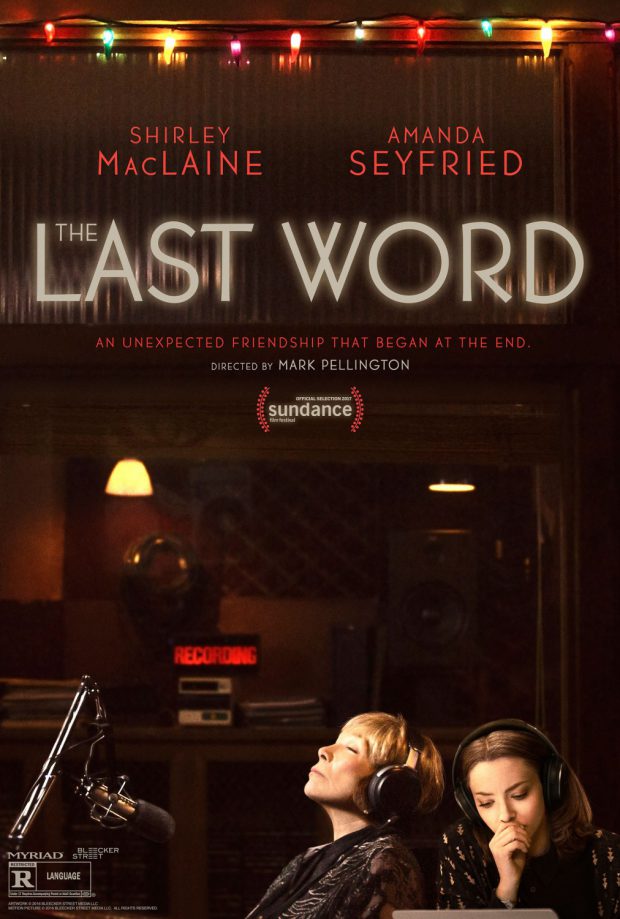 The rest of the story is essentially Harriet making up for lost time as she tries to manufacture a worthy obituary late in her life. She does this by becoming a DJ, befriending an underprivileged child and trying to patch things up with her daughter. This is where the film falls apart slightly. Harriet follows this checklist of things she needs to do in order to be well thought of when she’s gone and this bleeds into the way the story is told. For a while it feels like the writer is following a checklist and there’s a lack of depth in how this is achieved. Some time is spent on each aspect before moving on to deal with the next. It starts to feel really mechanical after a while and it definitely stands out. Generally the film is more concerned with the big moments which means that the quieter and more interesting of them don’t get the attention they deserve.

Despite that the film succeeds in how it handles the characters. Shirley MacLaine is mesmerising as Harriet with an air of arrogance covering an expertly buried vulnerability. Her line delivery is always perfect and there is enough sophistication in the writing to suggest that there is more to Harriet than we see.

Amanda Seyfried plays a character not dissimilar to what I’ve seen from her before but she does it really well. Anne is really endearing and there’s enough beneath the surface to allow a satisfying arc for her to go through. Seyfried has enough to play with deliver a likeable presence.

Harriet and Anne make for a good pair as they challenge one another. Anne isn’t one to let herself be pushed around and makes it known when Harriet has crossed the line which is frequently. Harriet takes it upon herself to guide Anne to be a better version of herself whether she likes it or not. Their scenes work so well because both characters are equally stubborn which means that they challenge one another. Amanda Seyfried and Shirley MacLaine have believable antagonistic chemistry and their growing mutual respect feels believable.

Generally speaking The Last Word is more than the sum of its parts but barely. There’s nothing wrong with that as it has an endearing yet predictable story to tell with engaging performances from the two leads. The story progression is fairly mechanical and focuses more on the big moments which makes the smaller ones suffer but the script smartly keeps everything focused on the characters and their relationship; both of which come over really well. There’s a lot to enjoy here with more depth than you might expect.