A young woman forges an unlikely friendship with her cantankerous old neighbour when faced with the prospect of an eviction in Simon Aboud’s This Beautiful Fantastic.

The story focuses on Bella (Jessica Brown Findlay), a strange young woman who was protected by ducks when she was a baby until she was found by an old man and given to an Orphanage. A lot is told about her in the opening monologe from her beginnings to her obsessive compulsive tendencies. The film isn’t interested in covering things like the mystery of her parentage or detailing what her upbringing at the hands of nuns was like.

I would say that this film could best be described as a fairytale in terms of its construction. The opening monologue outlines some information about Bella and suggests that her story is unusual as well as worth telling. This is backed up by the overall tone of the story. It carries itself with a sense of whimsy and often feels larger than life to the point that it borders on the fantastical. It never quite crosses that line but it probably wouldn’t have seemed out of place if it did. 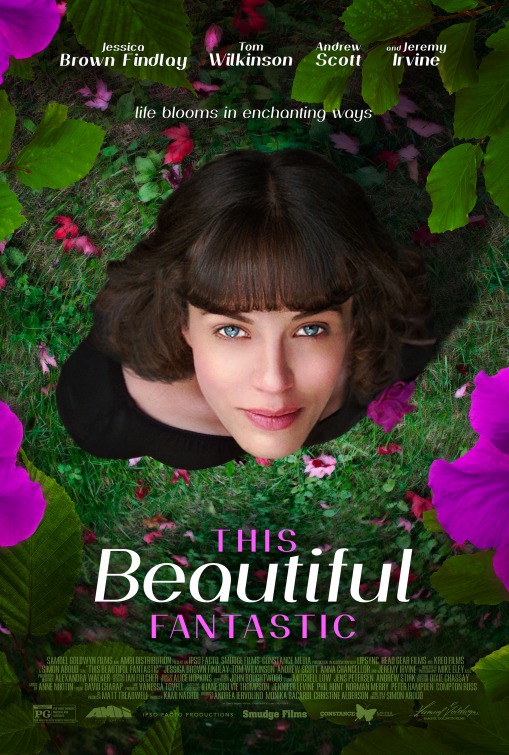 Bella is a really interesting character who seems to be a prisoner of her life in many ways. Her obsessive compulsive nature means that she has a fear of the outdoors and is somewhat apprehensive when dealing with other people. She exists in something of a self imposed isolation and Jessica Brown Findlay plays Bella with a sense of innocence that makes her perspective a notable one. She sees the world differently to others which gives her a really unique perspective. Her obsession with order is reflected in her surroundings and the ways she tries to bring order to the more chaotic aspects is cleverly done.

When Bella’s Landlord offers her the ultimatum of bringing her garden up to an acceptable standard or face eviction, Bella is forced to step outside her comfort zone to try and tame nature itself. It’s a clear conflict as the obsessive neatness of the inside of Bella’s home directly contrasts the chaotic mess that is her garden. It immediately tells the viewer that her sense of contentment doesn’t extend as far as her own garden. She can control the condition inside but the garden is something that she can’t as plants tend to grow in unpredictable ways. As such she simply ignores it until the point where she has to deal with it.

This brings in the central relationship of the film. Bella’s interactions with her neighbour Alfie (Tom Wilkinson) start off as somewhat antagonistic because he is offended by the state of her garden but soften as they get to know one another. Alfie is a fairly typical “grumpy old man” character who is angry at the world and resents those younger than him for no good reason. Bella’s innocence and good nature allow him to gradually open up to her and they forge an unlikely friendship as the film goes on.

Tom Wilkinson is great at this sort of character and the softening of his prickly personality feels natural. He has a believable rapport with Jessica Brown Findlay and their scenes together are compelling to watch. The film does lay the sentimentality on a bit thick as it goes but it matches the fairytale style so I’m inclined to think it’s deliberate. It may not be to everyone’s taste and I found it personally overwhelming.

Bella interacts with other characters such as Alfie’s cook Vernon (Andrew Scott). This friendship works really well as both characters are feeling overwhelmed by life so have something in common. Vernon has to deal with being a single parent to twin girls as well as Alfie being a very difficult boss. He acts as something of a big brother to Bella by helping her deal with her problems through providing important information and generally standing up for her. It works really well and Andrew Scott’s performance is excellent.

There’s a love story worked into the narrative with Billy (Jeremy Irvine); a man Bella meets while doing her day job at the library. I understand what these interactions are supposed to accomplish in that they allow Bella to face unpredictability in the form of other people and deal with the prospect of having her heart broken. Essentially it’s another chaotic thing she can’t control and it does work though it isn’t given enough attention nor does it make a big enough impact on Bella as a character so I feel that it could have been cut in favour of enhancing the father/daughter bond that develops between her and Alfie.

The film does feel a little on the long side. It sags a fair bit in the middle to the point that a lot of the momentum is lost. I’m all for spending time developing relationships but it started to feel somewhat repetitive after a while as the film laboured things that had already been clearly established.

A solid film that stands out thanks to being presented like a fairytale. Bella is an interesting character who has obstacles to overcome thanks to her obsessive tendencies. The clear contrast between the order of the inside of her house and the chaos of the garden is cleverly done and frames her conflict nicely. Her developing father/daughter relationship with her neighbour Alfie feels natural and Tom Wilkinson has a believable rapport with Jessica Brown Findlay. Bella’s friendship with Vernon operates almost like they are brother and sister which works really well in the context of the story. The romance aspect of the plot could have been done without but it’s clear what the purpose of it is. The film also sags in the middle by retreading ground that has already been covered but it’s a well presented whimsical fairytale drama.