Boyz in the Wood

The 73rd Edinburgh International Film Festival begins with Ninian Doff’s Boyz in the Wood; the comedic tale of a group of wayward teens venturing into the Highlands to complete the Duke of Edinburgh award.

At its core this is a coming of age story focusing on four young boys who are ultimately fairly directionless in their lives. Dean (Rian Gordon), Duncan (Lewis Gribbon) and DJ Beatroot (Viraj Juneja) are best friends on this journey as penance for their rampant misbehaviour. Joining them is Ian (Samuel Bottomsley); a home schooled kid who sits outside their established group dynamic. Their collective dysfunction quickly gets them lost which turns out to be the least of their problems as they find themselves hunted by an old couple (Eddie Izzard and Georgie Glen) who see the younger generation as Vermin to be picked off. Generational politics end up being something of a theme that comes and goes and leads to an unearned monologue about the state of the country and who might be responsible for it.

Broadly speaking this is a comedy about survival in a desperate situation cut off from resources. One consistently strong running gag is that the ineptness of the kids ends up keeping them alive through sheer dumb luck as well as skills that have previously been acquired in ridiculous ways. Despite the plot leaning towards comedy it is never lacking in stakes with the situation being portrayed just seriously enough to counter the humour. 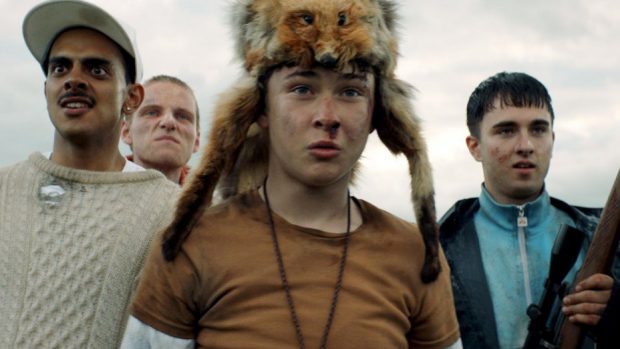 A rough trip to the Highlands

There is a good variety of comedy to keep the audience guessing throughout. This ranges from excellent character driven one liners that come right from the established traits of the kids to hilarious sight gags and even some slapstick thrown in there for good measure. It never feels repetitive and it’s superbly executed for the most part especially when there’s no fear of pushing beyond believability. In those cases the gamble absolutely pays off and the result is something that feels unique.

The actors playing the kids do an excellent job and carry the film nicely though they are largely defined by a single trait which does allow the plot to move forward neatly but is also somewhat limiting especially in the rare moments the film tries to be introspective with them. They just don’t have the depth for that to work as well as the writer/director clearly intended it to. This is definitely an example of material being elevated by stellar performances. Eddie Izzard is memorable as the maniacal villain hunting the kids down but comes across as a caricature rather than an actual character.

Some issues exist in the delivery of the plot. A subplot involving Highland police officers could have largely been done without as it doesn’t slot into the overall narrative organically though cutting it would deprive audiences of a superb bread based monologue delivered by Alice Lowe that is genuinely hilarious and almost justifies the inclusion of this subplot on its own. The film also feels a little bit too long with the last third feeling oddly tacked on compared to everything that preceded it despite having some memorable moments and bringing the situation to a conclusion of sorts.

An entertaining, hilarious and memorable start to the 73rd Edinburgh International Film Festival. The lead actors do an excellent job carrying the film with strong performances and excellent comedic timing. For the most part the plot hangs together nicely and justifies its descent into the ridiculous. A subplot involving Highland Police Officers could have largely been done without though cutting it would rob viewers of Alice Lowe’s excellent monologue about bread. Despite some failings here and there Boyz in the Wood is sure to be a crowd-pleaser for those in the mood to fully embrace its lunacy.