A father and son travel across Ireland to scatter their late wife and mother’s ashes on a remote lake in Elfar Adalsteins’ End of Sentence.

Right from the very beginning this film makes it abundantly clear what the audience is in for. Anna Fogle (Andrea Irvine) visits her son Sean (Logan Lerman) in prison with the father, Frank (John Hawkes) not being allowed to see him. This scene delivers so much information about the family dynamic with very little dialogue; Anna’s advanced cancer is established with a clear visual clue as well as the fractured father/son relationship that will come to carry the film. 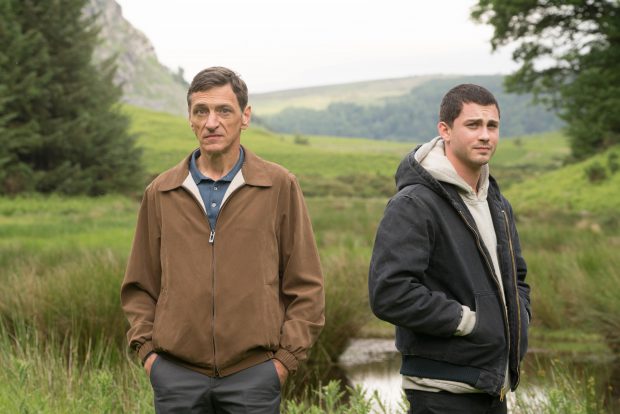 Once Anna passes and Sean is released from prison the film becomes a father/son road trip movie with the goal of fulfilling Anna’s dying wish to scatter her ashes on a remote lake back in her home country, Ireland. The film is all about character and lets the audience drink in the tension associated with this broken down relationship. Learning the cause of this takes time and is brought up organically as part of natural conversation rather than directly addressed which makes it feel all the more real and adds texture to the building blocks of this connection.

John Hawkes delivers an incredible performance as Frank. It’s subdued and quiet with a lot of his emotion coming through in lingering looks or extended silences that suggest how he is feeling underneath without expressing it. There’s an old fashioned quality to the way he carries himself and it consistently comes across that he’s a good man who has always tried to do right by people. Several references are made to modesty or showing respect throughout which grounds the character in that mindset and everything he does or says supports this.

Logan Lerman impresses as well. His performance is less subdued but there’s a lot about him to take in through subtext. Sean’s grief is also internalised but in a very different way. His actions are a lot less subdued in contrast to his father but the pain he feels after the loss of his mother is very clear and is very much the driving force for him throughout the film. His prison backstory is heavily alluded to without going into great detail but it’s very apparent that he has no desire to return and feels regret for the circumstances that lead him to that. Carrying out his mother’s dying wish despite the animosity he feels towards his father is an obvious tribute to her memory and indicative of how close he was with her.

The Frank/Sean dynamic is great and is very much the emotional core of the film. They challenge each other in really interesting ways and the relationship is explored from the point of view of fault existing on both sides which adds layers of realism to the fractured connection. Ultimately it builds to a fairly predictable resolution that, while earned, feels like a foregone conclusion from the beginning but what it takes to get to that point is both earned and meaningful. There are a lot of deeply moving moments throughout inspired by this dynamic that will definitely stick in the mind long after the credits roll.

Naturally the father/son road trip comes with its share of complications such as Jewel (Sarah Bolger); a beautiful hitchhiker who manages to unwittingly stir up further resentments that exist between the two men. Her character isn’t as well developed as Frank and Sean but the narrative plays out in a way that suggests this is a deliberate choice. Sarah Bolger plays this role as sweet and vulnerable contrasted with mysterious with a dash of a suspicious nature. This combines nicely into a character that begs to be trusted while keeping the audience wary of her. This pays off nicely even if her final scenes are the result of a series of coincidences that strain believability. In some ways it feels as if Jewel and Sean’s dynamic was designed as a dark mirror to the much talked about Frank/Mary connection though the film doesn’t spend a lot of time exploring that idea.

This film is definitely carried by the characters though the situations they find themselves in make for compelling viewing. Visually the film is stunning with Irish vistas adding a scenic quality to it and injections of Irish culture throughout are as charming as you’d expect. Humour is lightly peppered throughout the narrative with expert deployment to offset the broadly morbid subject matter. The use of music is always appropriate and the absence of sound is used really effectively to set the tone at key points. It’s generally really well constructed and the various elements combine with near perfection. 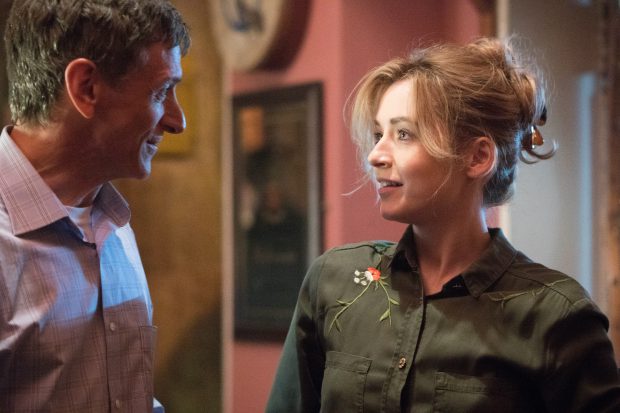 Jewel knows how to work a room

A moving, expertly constructed character driven experience with a strong central dynamic and a really compelling story. One of the most remarkable things about this film is its approach to storytelling with much of it being accomplished visually rather than relying on dialogue to build the situation. The core dynamic between Frank and Sean carries the film nicely with lots accomplished through what remains unsaid and the addition of Jewel makes for interesting complications in their already strained connection. The development of the core relationship might be a bit predictable and some of the later moments involving Jewel strain believability but ultimately this is a well constructed film that does everything it sets out to do expertly, always hitting the desired emotional beats effectively.