A man who suffers from a rare form of narcolepsy that causes him to pass out whenever he feels strong happiness has his coping techniques put to the test when he falls in love in Jason Winer’s Ode to Joy.

A comedy centred around the premise of someone suffering from a condition may seem somewhat problematic on the surface as mining comedy from medical conditions or disabilities could definitely be seen as mean spirited if the jokes are designed to appeal to the lowest common denominator. Thankfully this film doesn’t do that, instead choosing to frame the story around the difficulties this causes. 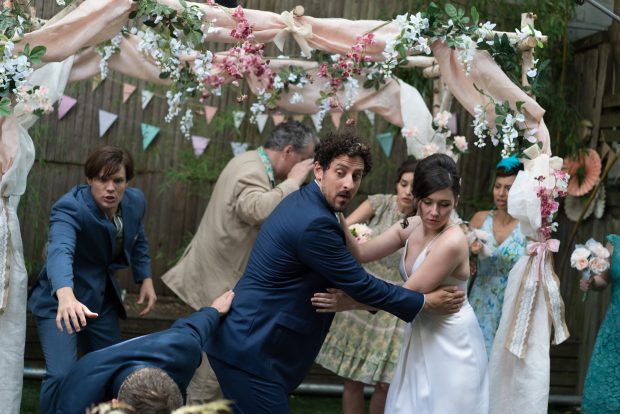 Charlie knows how to make a wedding memorable

Charlie (Martin Freeman) has been living with this condition for most of his life and has found ways to function in spite of it. This includes constantly willing himself to think about terrible things happening in the world or imagine horrific outcomes, walking to work while listening to funeral music to shield himself from the wonders of the world around him and generally living a solitary life free of extreme stimulation. This is done in a humorous way but doesn’t take away from the tragedy and loneliness that defines Charlie’s life. He lives in the world but can’t truly be a part of it as he has to constantly deprive himself of pleasure to ensure that he doesn’t collapse.

Martin Freeman plays this perfectly; he is well known as a subdued performer so this sort of character is exactly in his wheelhouse. His line delivery and mannerisms are very deliberate suggesting a conscious effort to remain as passive as possible for his own safety. At times he can be a difficult character to root for as many of the decisions that he makes don’t paint him in the best light but Martin Freeman’s inherent likeability offers an organic counterbalance to this which helps Charlie feel more developed as he learns from the mistakes he makes rather than the film dressing them up as being necessary behaviour. Another piece of brilliance in his characterisation is that he clearly has an eye for the beauty and whimsy of the world around him which makes fighting against his desire to be happy even more difficult and the self deprivation all the more tragic.

Charlie’s careful efforts to get through his life without passing out are challenged when he meets Francesca (Morena Baccarin); a beautiful woman and a force of nature that is very much his opposite. When he meets her she has recently concluded that she typically attracts men she has no future with so Charlie is identified as a change of pace for her. Unfortunately for both of them their first date results in Charlie being too happy and passing out leading him to believe that there’s no way that they can have a future together. From here the plot dances around how well they get along and builds towards the inevitable. To its credit it does so in a really unconventional way that plays nicely within the rules set up around Charlie’s condition. It’s a really clever twist on the will they/won’t they dynamic that consistently works. Martin and Freeman have excellent chemistry and use their comedic gifts really well. Francesca also has a great deal of depth for what could have so easily been a shallow love interest role.

The core relationship is between Charlie and his brother, Cooper (Jake Lacey). They have a very close -sometimes too close- connection that has existed since childhood where Cooper has helped Charlie with his condition and literally been there to catch him when he falls. The film plays around with this dynamic wonderfully and finds some interesting ways to challenge it while consistently keeping their interactions watchable throughout.

Another relationship that receives some attention is Charlie’s connection with Bethany (Melissa Rauch); a shy and retiring alternate love interest who is deemed to be more Charlie’s speed. Everything about Bethany is hilarious from her excitement about yarn or the type of wool shirts are made from to a showstopping scene involving a Cello that has to be seen to be believed. She is used exactly the right amount and never overstays her welcome while serving an important purpose in the narrative.

With this being a romcom there are certain elements common to that genre that I dislike and they creep into this film offering distraction from all the clever things that are being done. As good as the relationship between Charlie and Cooper is there’s a great deal of oversharing between them that doesn’t feel the least bit realistic. It’s as if they were written as friends originally before this being altered without changing the dialogue to accommodate. There are certain situations that are distractingly artificial as well. These are very minor niggles that don’t detract from the brilliance the film otherwise exhibits.

Must not be happy!

A charming and amusing unconventional romance with an excellent setup, endearing characters and a showstopping Cello sequence. Framing the story around Charlie’s condition works really well and is appropriately sensitive in where the comedy is mined from. Martin Freeman plays the role perfectly and has great chemistry with Morena Baccarin who also manages to be a well developed character. Charlie’s connection to his brother Cooper works well as the core relationship and Melissa Rauch’s Bethany is a delightful addition to the cast at key moments. The film does fall foul of some of the romcom trappings but this isn’t enough to detract from the brilliance exhibited elsewhere.