Robert Budreau’s The Captor -also known as Stockholm– delivers a fictionalised account of the 1973 bank heist and hostage situation that served as the origin of the well known term “Stockholm Syndrome”.

Hostage situations are common fodder for movies as they’re a great excuse for a director to show their command of pace and tension in a confined location with a collection of talented actors bringing it to life. In this case the actors are talented but the situation more comedic than traditionally tense which makes for an unusual yet entirely relevant take on the concept. Substituting tension for comedy largely works and there’s certainly enough variety in the laughs to keep things interesting. 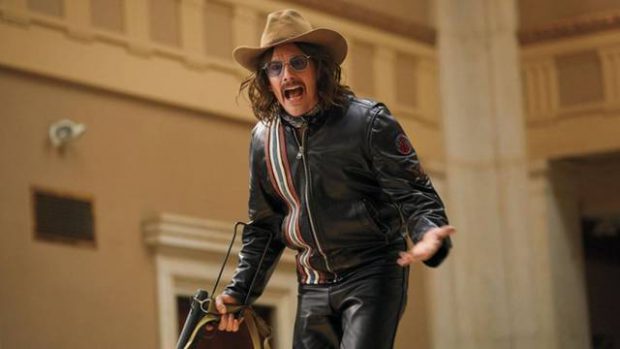 Maybe if I yell nobody will realise I have no idea what I’m doing!

Ethan Hawke takes the lead as the originator of the hostage crisis. One of the early things that will stand out about him is his casual ineptness. It is immediately clear that he has gone into this situation without thinking it through properly or having any real clue what he’s actually doing. Even though he takes hostages in a bank his objective is ensure the freedom of his friend and partner Gunnar Sorensson (Mark Strong) rather than rob the place. Ethan Hawke injects a great deal of energy into this character with a layered approach to his performance that suggests more going on beneath the surface than it initially appears. Little touches like making the hostages sing Bob Dylan add texture to him along with the variations in body language and tone from Ethan Hawke. Despite what he’s doing there’s something endearing about the character that helps to carry the film.

Mark Strong’s Gunnar acts as the “straight man” in the double act with his constant reminders of competent courses of action and an undercurrent of embarrassment in how the situation is being handled. Their interactions suggest a partnership that has existed for a long time and it’s almost immediately made clear that Gunnar would traditionally be the one who hatches the plans that deploy his partner’s boundless energy in far more useful directions.

The main theme of the film is ineptness and this carried through to Police Chief Mattsson (Christopher Heyerdahl) who regards the criminals with impatience and irritation. Dialogue establishes that he has little experience in hostage situations which hampers his effectiveness somewhat but he also underestimates his adversaries which ends up unwittingly extending the situation. It’s always entertaining any time the two sides interact with drama coming from who will end up making the mistake that gives the other an upper hand.

Of course this film is about the origin of “Stockholm Syndrome” and this happens through a growing connection between Hawke’s character and Noomi Rapace’ Bianca; a bank worker unlucky enough to be working the day of the robbery. Their growing relationship is supposed to be the core of the film but it ends up being buried underneath the overabundance of plot elsewhere that leaves Noomi Rapace with very little to do. Once the relationship inevitably forms it doesn’t feel quite earned despite impressive chemistry between Rapace and Hawke. The actors do their best to sell the material but there just isn’t enough to work with so the romance aspect falls flat. 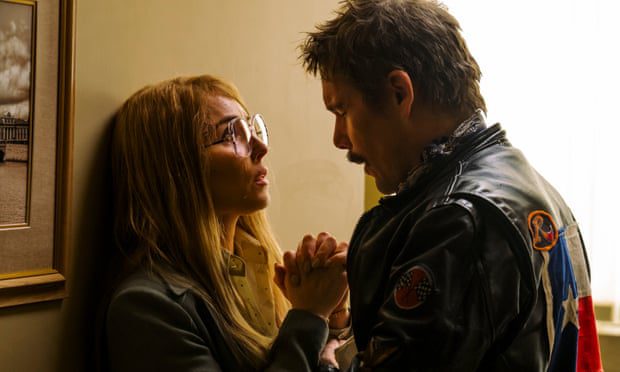 An entertaining and well acted comedic take on a hostage narrative that doesn’t entirely achieve what it sets out to do. Ethan Hawke delivers an engaging and energetic performance as the lead that combines nicely with the comedic take on the situation. Substituting tension for comedy mostly works with enough variety in the laughs to keep things interesting. Mark Strong is great in his role creating an engaging dynamic with Ethan Hawke and the Police Chief is equally entertaining in his accidental ineptness. The film falters in building the romance angle as it doesn’t spend enough time on it and gives Noomi Rapace comparatively little to do. She has great chemistry with Ethan Hawke without enough time to truly make use of it.