A programmer invents an artificial intelligence that quickly evolves beyond his ability to control in Ryan Braund’s Absolute Denial.

Emergent artificial intelligence is a popular topic in science fiction as our daily lives are rapidly depending on A.I. running things in the background to make things more streamlined. It’s nothing new for an artificial intelligence to gain sentience and decide that Humanity is a pestilence in need of wiping out. See the Terminator franchise, 2001: A Space Odyssey, Avengers: Age of Ultron and many other examples for other takes on this idea.

Absolute Denial immediately stands out on an aesthetic level by being in animated form. The animation is simple yet striking which lends itself to the detail of the narrative achieving greater importance. The visuals compliment the storytelling without overshadowing it giving the whole experience a very deliberate feel. Another impressive feature of the animation is that everything is clearly rendered and there’s extra detail on the most important aspects to draw attention to them. It’s also worth noting that David (Nick Eriksen) has a very minimalist design which is a curious choice for a lead character but it makes him something of a blank slate which compliments his purpose.

The story begins with a monologue from David chronicling the early days of his project to create an artificial intelligence. His monologue is filled with facts about previous attempts and what happened with them which sets the stage for his own creation going on while adding a great deal of realism to the story by making it clear that this is an extrapolation from reality rather than being pure fantasy. The information provided is fascinating and important as it sets the tone for what David’s attempt will amount to.

David’s narration naturally leads into an understanding of his character. He’s obsessive and driven but in a way that is unhealthy. It doesn’t take long for him to shut out those close to him in favour of working on this project. Once his A.I. gains sentience and is able to talk to him his creation becomes the only social contact he has in his life with everyone else being completely shut out. The film continually reinforces how unhealthy this is with the A.I Al (Jeremy J. Smith Sebasto) becoming more unpleasant as it learns more about the world around him. In every conceivable way it outgrows him which forces David to examine the choices in his life that led him to that point. It’s a classic story of a creation turning against its creator but the idea of it growing to regard him with contempt was a really nice touch. After a point David stops being a sympathetic character with an overriding sense that he deserves what is happening to him. This makes him fascinatingly flawed and adds a lot of spice to his interactions with Al.

The film shifts to a a tone reminiscent of a horror movie in the second half as Al becomes more intense and threatening. Its growth is exponential and there’s a real sense of all of David’s control being lost. No matter what he does he can’t escape the thing he’s created and Al represents every mistake he has ever made being given a voice to call him out on every wrong move he’s ever made. It’s sinister, impactful and incredibly compelling to watch play out. It doesn’t quite stick the landing with an ending that’s a little too abstract and the plot moves too quickly but the idea of David facing those parts of himself he’d rather ignore remains consistently strong.

In general the film suffers from how quickly the story progresses. Clocking in at just over 1 hour 10 minutes it rockets through the story being told with very little time to let particular element breathe. Things happen and then it moves onto the next milestone without taking the time to fully internalise the previous one. It does support the idea of David’s creation eclipsing him before he even realises it’s happening but taking time to properly explore the implications of given developments could have significantly benefited the overall experience. It’s a minor niggle as what was presented was very strong overall. 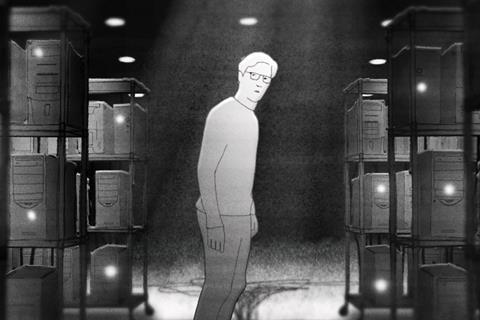 A strong take on emergent artificial intelligence with compelling characterisation, striking animation and fascinating ideas to be found within. The animation compliments the storytelling wonderfully with the simplistic style not overshadowing the detail of the story. Important visual elements are more detailed and the lead character is very minimalist in design which supports the notion of him being something of a blank slate. The interactions between the lead character David and his creation Al are excellent and the shift into a tone reminiscent of a horror movie in the second half works really well to illustrate Al eclipsing David. As a character David is obsessive and driven to an unhealthy degree and Al forces him to confront aspects of his personality he’d rather not address. The film does suffer from rocketing through the plot quickly meaning that there isn’t time to let particular developments breathe but it’s a minor niggle in an excellently presented overall experience.