A stand up comedian has to deal with a radical shift in her life and face her own mortality following a breast cancer diagnosis in Ruth Meehan’s The Bright Side.

Cinema can often be used as a vehicle to explore and shine a light on very difficult personal issues that people face whether that be illness, loss or anything else that springs to mind. The best examples make the viewer really think about the impact these things have on the people affected and consider how they might react if similar things happened in their own life. This is one of those films with a poignant exploration of the reality of what a breast cancer diagnosis means.

Kate (Gemma-Leah Devereax) is the lead; she’s from a small town that -according to her- has nothing remarkable to speak of, she is stuck in a rut in her life and lashes out at those around her due to an inability to process much of what that means for her. Her world is changed radically following a breast cancer diagnosis and she has to deal with the reality of fighting for her own survival. The notion of chemotherapy is explained to her as well as the difficulties that will come with the chemical assault on her body. None of the details are sugar-coated and Kate’s reaction remains the central focus throughout. At every point the viewer is intimately connected to the way Kate thinks and feels as she goes through this.

Punctuating her journey is stand up comedy interludes where she uses her life and her illness as inspiration for her material. One reading is that it’s about making the best of a bad situation but another is that it’s a defence mechanism that prevents her from truly internalising the truth of her situation. There is evidence throughout of Kate cloaking her true feelings in misplaced humour and taking every opportunity to avoid discussing difficult subjects. A particularly noteworthy scene that she shares with other cancer patients where she takes it too far and causes upset highlights this. Others around her are fixated on the reality of the situation where she constantly tries to escape it through making light of it. 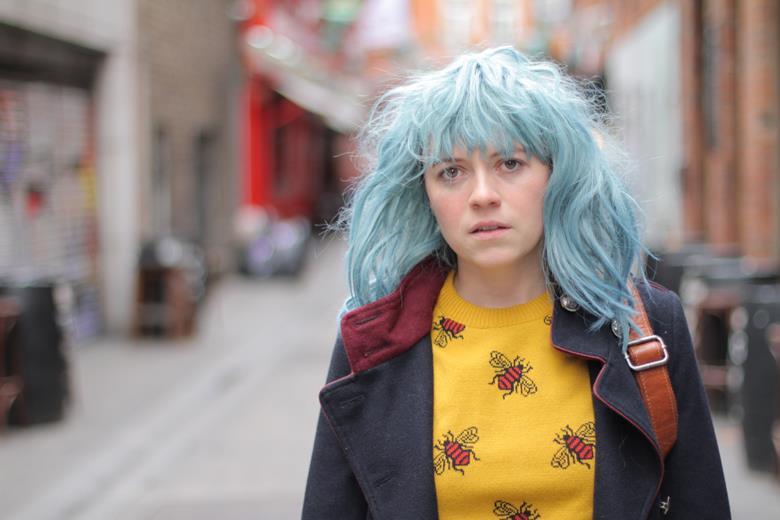 It’s a blue wig sort of a day

In some instances that’s appropriate as it’s pointed out that a positive attitude and hope are important when it comes to beating the cancer but in Kate’s case it is often a mask that conceals her true feelings. This is something the film continually drives at and does so wonderfully. The constant battle between reality and denial that goes on within Kate is a central conflict and Gemma-Leah Devereax provides such an engaging performance that the viewer is encouraged to root for Kate find the strength to be real about what she has to deal with. The contrast is brilliantly supported by scenes designed to entertain countered by others that are hard hitting and emotionally weighty. It highlights the complexity of life and how it goes on in the midst of an extended treatment. The different wigs Kate wears are excellent visual shorthand to give an idea of her emotional state at a given point.

Kate is supported on her journey by four women with their own unique yet similar experiences. Tracy (Siobhán Cullen), Fiona (Karen Egan), Róisín (Barbara Brennan) and Helen (Derbhle Crotty). Each of them have their own way of coping with their condition and can advise Kate thanks to the benefit of their own experiences. The interactions are as complex and varied as anything else the film provides with plenty of levity as they get to know each other along with meaningful commentary on the feelings associated with what they are dealing with. It’s all very raw and compelling with everything fixed on Kate’s perspective as she reacts to everything she’s exposed to. These characters are designed to support her journey and Kate’s arc is around being realistic about her life when dealing with her diagnosis.

There are other connections that support her journey such as Andy (Tom Vuaghan-Lawlor); a widowed pharmacist who wants to help and her brother James (Kevin McGahern). Both are important to Kate in their own ways but the characters themselves are distinctly one note and fail to rise above the purpose the serve within the context of her story. With it being all from Kate’s perspective it makes sense but it’s notable that they are far less developed than every other character that appears.

It’s clear throughout that this is a very personal story with great care being taken to do it justice. It’s raw, uncompromising, complex and very real throughout. Kate is an engagingly flawed protagonist with a collection of interesting characters around her who support her journey in different ways. It’s moving and uplifting with plenty of attention given to appreciating life in the darkest of circumstances and never giving up which makes for a wholly positive message despite the overwhelming odds.

A moving and uplifting story of facing adversity that doesn’t sugar-coat the difficulties associated with fighting a nasty illness. Kate is an engagingly flawed protagonist who uses humour as a defence mechanism to avoid dealing with the realities of her life and her particular situation. The film does a great job contrasting reality and denial through a wonderfully complex lead performance with this supported by scenes designed to entertain being countered by others that are emotionally hard hitting. The supporting characters dealing with their own diagnosis add a variety of perspectives for Kate to consider. Other side characters are noticeably well developed in comparison but the entirety of the narrative is from Kate’s perspective so it doesn’t detract much. It’s clear that this is a very personal story with great care being taken to do it justice. Plenty of attention is given to appreciating life in the darkest circumstances and never giving up which makes for a wholly positive message despite the overwhelming odds.