The debut of Star Trek: Strange New Worlds is almost upon us and fans are very excited to see the adventures of a pre-Captain Kirk Enterprise crew. Kneel Before Blog was fortunate enough to get an advance look at the first 5 episodes so here is a spoiler free overview of what to expect from the show. In depth analytical reviews will accompany the release of each episode so turn your viewscreen to Kneel Before Blog after watching each episode to get deep dive thoughts.

In a way Strange New Worlds could be considered the longest time between a pilot being made and a series being picked up in television history. “The Cage” was completed in 1965 with Jeffrey Hunter’s Christopher Pike commanding the Enterprise and 57 years later Captain Pike’s adventures finally make it to series. Right from the earliest announcement of this show the producers promised a return to the more classic episodic format that defined the franchise when it was at its height in the 90s, That promise is fulfilled in the first half of the season with five episodes that viewers could point to and say “That’s the one where…” rather than a serialised plot that bleeds into every episode of the season. Serialisation does still exist but it’s character driven so the crew of the Enterprise remember their experiences and build on them as the episodes progress. It’s an excellent modernisation of an old idea and helps make the Enterprise feel like a location with substance with its own culture that develops organically. 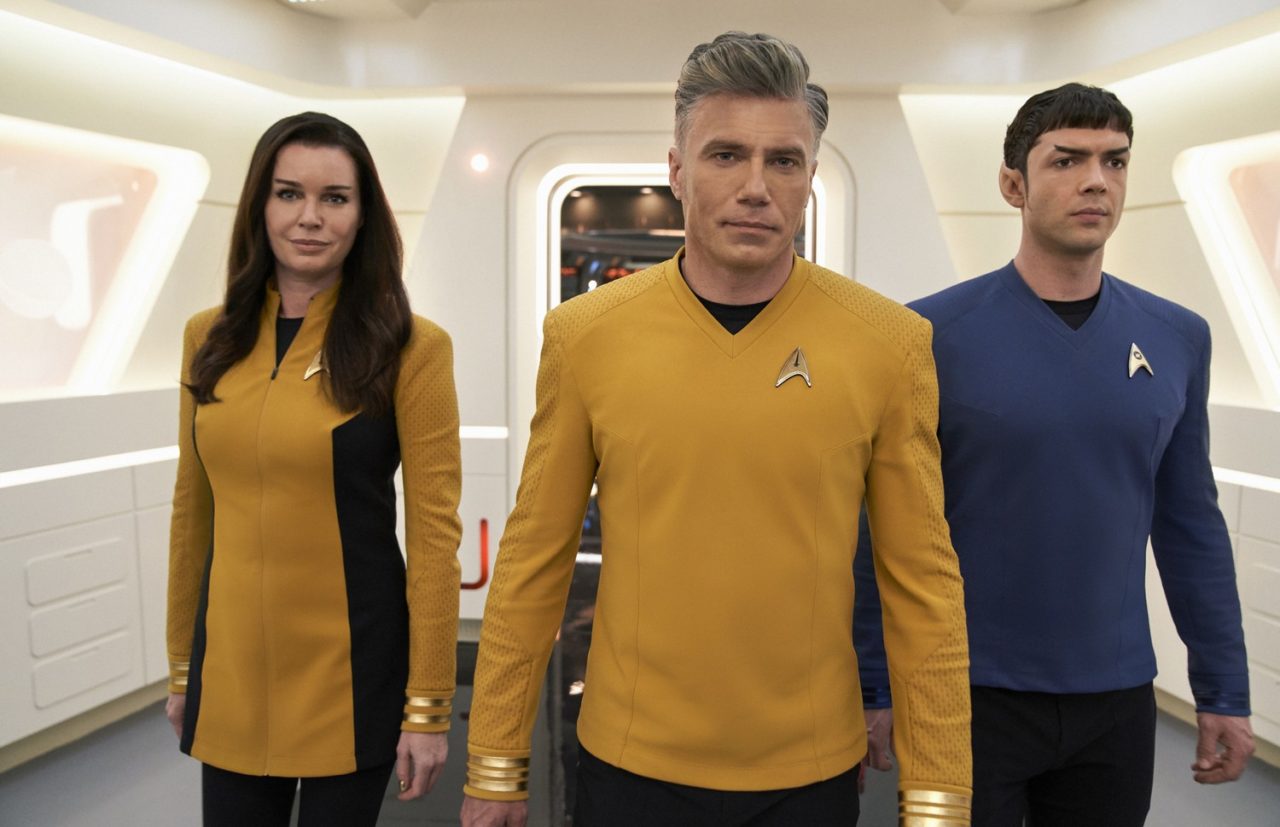 Also front and centre throughout all of the episodes is the Star Trek idealism. Part of what made the franchise so popular and enduring was that it depicted a positive prosperous future free of the inequalities that plague modern -for whatever era it airs- society. It’s very much woven into the DNA of Strange New Worlds with Anson Mount’s Christopher Pike leading a crew devoted to being a shining example of humanity at its best. The show delivers its messages earnestly with one of the episodes in particular offering a striking moral lesson that reflects our own world. Any messaging isn’t subtle but it isn’t insultingly preachy either. Like the best of Star Trek it tells us about our own world through a science fiction lens.

The episodes themselves are all very enjoyable. As said each of them has a distinct plot that separates them from the others and there’s plenty of variety to the storytelling whether that be the crew of the Enterprise working to divert a comet from hitting a planet or navigating peaceful first contact with a new alien race. A range of problems are encountered that test the crew in different ways and make use of their unique skills in approaching a situation.

Characterisation is very important in Strange New Worlds. The first trailer shows Captain Christopher Pike (Anson Mount) in isolation struggling to process the future he got a look at during Star Trek: Discovery season 2. Dealing with that knowledge forms his arc in the first episode and it’s something that comes up after that point but doesn’t overwhelm the narrative or his character. Anson Mount is as charming as he ever was in the role and has incredible presence. His performance evokes a man who people would happily accept as a leader. Pike is a great character with lots of layers and the show consistently makes great use of him. 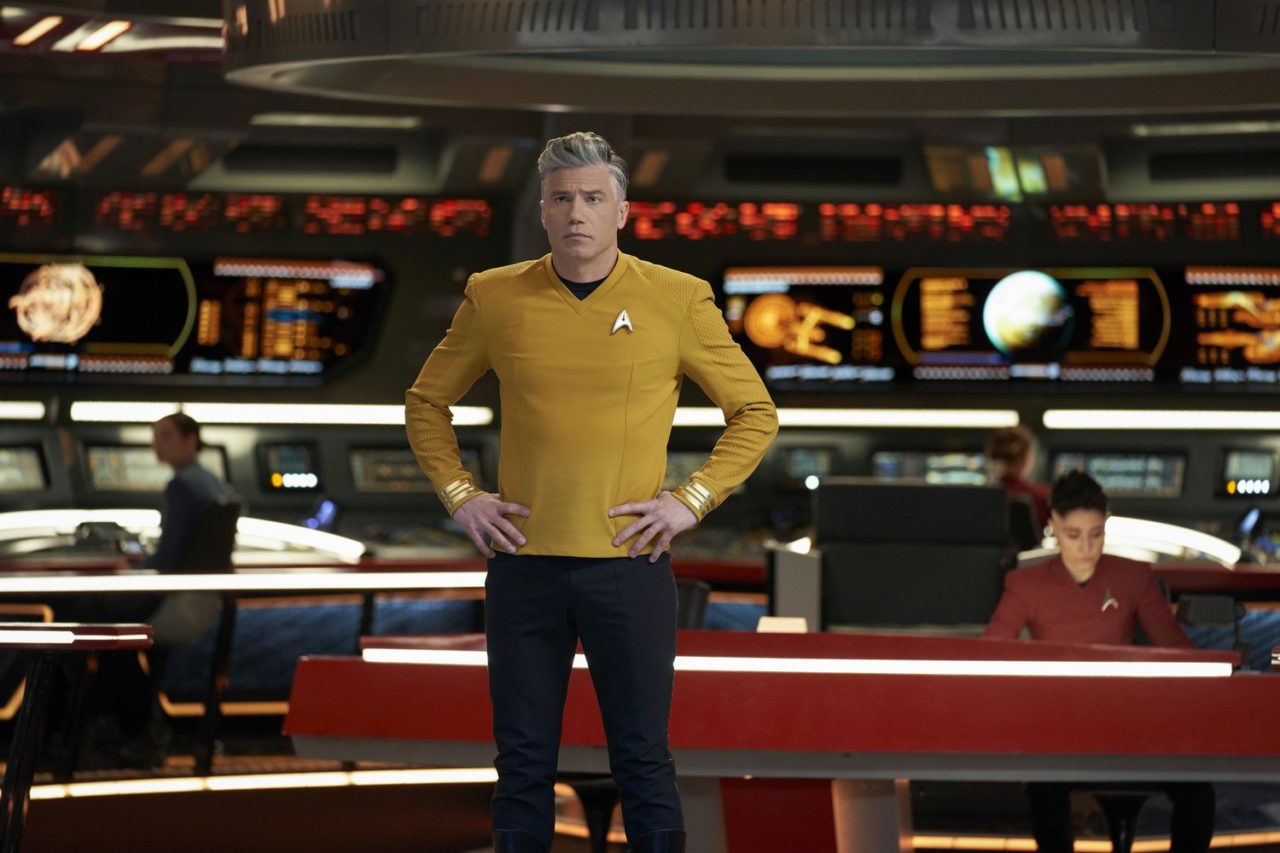 The Captain is in!

Spock (Ethan Peck) is at an early point in his life so hasn’t found the balance between the two halves of himself. The show externalises that through a particular relationship that receives attention as well as having the imbalance in his life create difficulties in how he interacts with the rest of the crew. Sometimes it’s used for comedic effect and other times dramatic but it’s always engaging. Ethan Peck’s take on the character of Spock is distinct from Leonard Nimoy while still containing shades of the man he will become. Peck makes Spock his own and some of what he does with the character is delightfully surprising.

Una Chin-Riley (Rebecca Romijn) is Pike’s first officer and a very strong presence on the show. One of the episodes has her take the lead and aspects of her backstory are detailed -some of which might make fans of non can novels and the like very happy- along with her natural leadership ability and fierce intelligence. Rebecca Romijn injects an effortless swagger into the character while making her personable. She’s cool but not too cool to talk to those under her command.

The potential breakout new character is La’an Noonien Singh (Christina Chong). She is the Enterprise’s security/tactical officer and is haunted by a tragic past that has shaped the person she is. Her surname will resonate with many fans and it does begin to be addressed within the first five episodes but she isn’t defined by her name connecting to a famous character in the franchise; she is very much her own person and factors into the episodes in really compelling ways.

Fans of The Original Series will recognise Nyota Uhura (Celia Rose Gooding) and Christine Chapel (Jess Bush). They are altered from their thinly defined counterparts in the original show but not to a distracting degree and the show routinely makes great use of their particular skills in a given situation. Uhura is a great point of view character being a Cadet and new to the Enterprise so it isn’t out of place for her to ask questions and be uncertain while also displaying the wonder that comes with explanation. Chapel gets to sink her teeth into a number of medical problems as well as having some some thoughtful content relationships. Doctor M’Benga (Babs Olusanmokun) is also a legacy Original Series character who is basically a blank slate for the purposes of this show. There is an especially heart-warming character beat associated with him that comes into play and his general presence is fun. 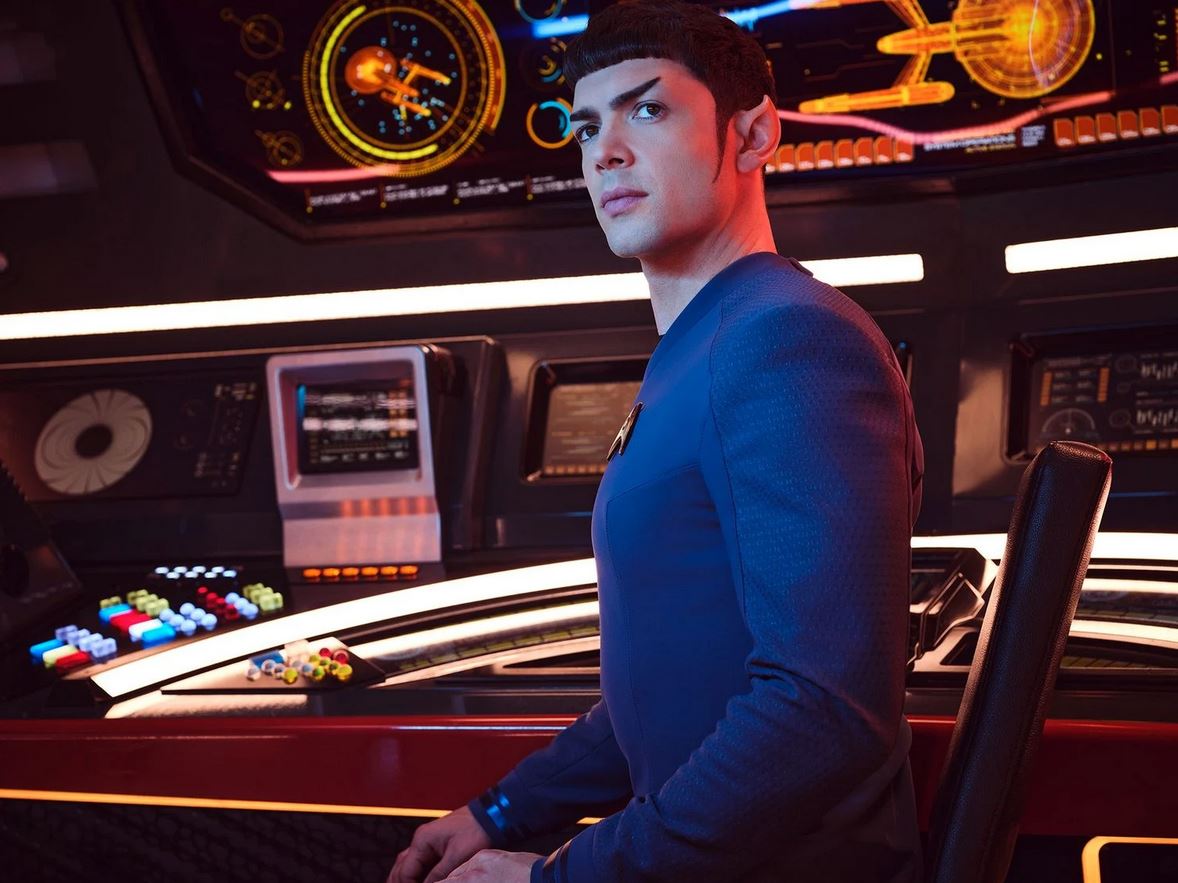 Characters like navigator/pilot Lieutenant Erica Ortegas (Melissa Navia) and Chief Engineer Hemmer (Bruce Horak) occupy more of the background than the others but it’s clear their time will come and enough is done with them for a strong impression to be made. As part of the ensemble the work brilliantly and little injections of personality go a long way. All of the main cast are important to Strange New Worlds and it takes its time giving them the coverage they deserve.

Strange New Worlds is a must see for long time fans of Star Trek and new viewers alike. It’s high energy, dripping in wonder, visually stunning with impressive set pieces and a lot of fun to watch. The mixture of episodic storytelling with serialised character  work is perhaps the best update of the franchise seen so far and it’s sure to make fans feel a strong sense of familiarity while being gifted with something new. Star Trek goes back to its roots with this show and allows the franchise to grow anew.

Be sure to come back each week for in depth analysis on every episode.