A British film crew attempts to boost morale during the Second World War by making a light hearted propaganda film about Dunkirk in Lone Scherfig’s Their Finest.

Structurally the film builds itself around making the film and all of the obstacles that get in the way of the production. As a problem crops up professionally an equally challenging one appears in the personal lives of the characters. It’s clear and keeps the momentum of the film up while challenging the viewer to pick up on the storytelling flaws if any. I certainly didn’t find any significant ones.

Gemma Arterton proves herself to be a really likeable lead as a woman who is assertive and intelligent but completely held back by the gender roles of her time. She has to work twice as hard to be valued half as much as the men she works with and she is willing to accept that and get on with things. Her character Catrin is always worth watching and I was really pulling for her to get what she wanted out of her life and the production.

Sam Claflin as Catrin’s colleague and love interest Tom is also very good. He has a polite and measured way of speaking but also seems a little rough around the edges. It’s a performance that Claflin really commits to and he has great chemistry with Gemma Arterton. His character wasn’t as well developed as hers was but his role was mainly in support of her story so he didn’t really have to be. 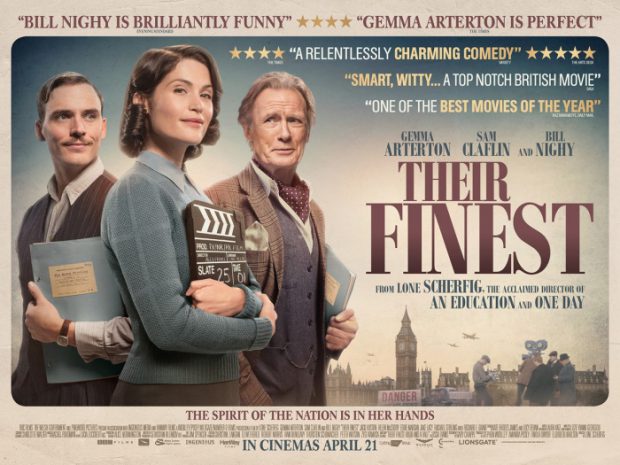 Stealing the show is the always excellent Bill Nighy. In this film he’s playing a pompous and arrogant actor who actually has a good heart and cares about those he works with. His selfish and entitled side sneaks through now and again but he mainly wants what is best for the production while making sure he’s looked after. Scenes where he is playing his character playing another character are among the best and there isn’t a single member of the cast he doesn’t bounce off well.

The film is very funny as well. It’s sharply written with some great one liners and amusing situations. There’s a good variety of comedy as well with traditional jokes, dark humour, sight gags and slapstick humour making an appearance to name but a few. The actors all carry it well and some parts are an absolute right.

It isn’t all comedic though. The film isn’t afraid to move the audience when the occasion calls for it. These moments are few and far between and are usually bookended by some amusement but there’s a lot more going on beneath the surface beyond a traditional romantic comedy.

The film even manages to tackle some issues such as the gender pay gap which is still somewhat relevant today. Other issues such as the role of women in home as well as the workplace are woven throughout this film. Different sides of fighting Wars such as the constant propaganda battle to keep troop and civilian morale up and the nature of compromise in order to keep allies happy are all represented.

It’s a lot to cram in and sometimes the issues only get a brief mention before being all but discarded. It keeps the pacing of the film moving quickly but also prevents interesting ideas from being explored properly. The narrative could have been much tighter if the film had chose specific issues to tackle and stuck to them.

An amusing and moving film that delivers as a comedy and as a drama. Gemma Arterton is a really likeable lead with a strongly written character and Sam Claflin provides able support as her coworker/love interest. Bill Nighy completely steals the show with a layered character who has a lot more to him than initially presented. The film juggles comedy and drama really well with varied attempts to make the audience laugh while not being afraid to attempt to be moving and explore some important issues. I would say that the film tries to tackle too many issues which leaves some of the arguments underdeveloped but it’s barely noticeable as it keeps the pacing of the film moving along nicely.