Harry Macqueen’s Supernova follows a couple as they take a trip across England in an old RV while dealing with the reality of progressing dementia.

The most important thing in life is time. It’s something we never get any more of and something we will never get back. There are certain things that increase personal awareness of that fact and dementia is really high on that list. Stanley Tucci’s Tusker is dealing with the harsh reality of an illness that will strip away the essence of who he is. His awareness and identity will disappear and with them everything he enjoys about life. Colin Firth’s Sam is his long term partner who has to face the reality of the person he loves most fading away before his eyes. 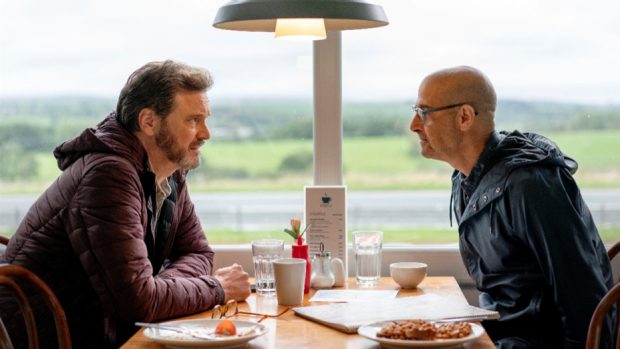 These are the moments that will be missed most

It goes without saying that it’s a tough subject that has to be treated with sensitivity and that’s something this film does really well. Supernova focuses on the connection that will fundamentally change because of the illness rather than the illness itself. It’s all about the moments shared between the couple and the relationship they have built over decades. Stanley Tucci and Colin Firth create a very charming, rich and textured believably lived in relationship. There’s a shorthand evident in their interactions that comes from knowing one another so well and expertly written bickering that can only exist between people who know each other so intimately.

The performances are excellent; so much is said in brief looks or sinking expressions when they feel the other isn’t looking. Both actors convey the sense of a brave face being put on as the couple try to make the most of the time they have together while the spectre of what awaits hangs over them. As the film progresses it is brought up more and the hard conversations eventually take place once the weight of the situation becomes too much to ignore. It’s not as melancholy as it sounds with periodic injections of humour cropping up throughout the narrative. The audience is encouraged to go on both the physical and emotional journey with the characters which includes being a bystander in their humorous banter. Macqueen’s script creates a fluid sense of their relationship and why it’s so strong. Quieter moments are warm and comfortable countered by the emotionally driven difficult conversations that are devastating to watch. A strong balance is created which makes the whole situation feel very real.

Not a lot happens in the film which isn’t a bad thing as it is largely a mood piece though the film does somewhat structure itself around visits to family, friends and important places from the couple’s time together. All of the conversations feel organic but the time spent with family members and friends is a little too abrupt to create the intended impact. None of it is bad but more time with the additional characters may have provided a more complete sense of those relationships. Everything was focused on the central relationship and that’s definitely the right thing but the interactions with family and friends came across as a diversion from the main narrative rather than an organic extension of it. A powerful and moving exploration of connection in the face of inevitable loss and the importance of making use of the available time. Stanley Tucci and Colin Firth both craft a charming and believable relationship that feels entirely lived in. A strong script supports their performances with wonderfully crafted characters and meaningful moments that create a fluid sense of the relationship. So much is said in looks or sinking expressions when the other isn’t looking and the difficult conversations that the characters have are devastating to watch. A strong balance is created which makes the situation feel very real. To some extent the additional characters distract from the core relationship rather than being an organic extension of it though none of those scenes are bad but they do come across as being too abrupt in places.