A hunter and his daughter are sent to a remote outpost to deal with Wolf attacks in Tomm Moore and Ross Stewart’s Wolfwalkers.

From the opening frames this film puts across exactly what it wants the viewer to pay attention to. The beauty of the natural world plays significantly into the narrative and the visuals make this abundantly clear. Every frame of animation looks painstakingly crafted to deliver the most striking image possible with stunning attention to detail, vibrant colours and a world that looks like it completely belongs to this film.

Delivers what it promises

The story picks up with a hunter named Bill Goodfellowe (Sean Bean) being sent to a remote outpost in Ireland to deal with wolves that have been plaguing a growing settlement. With him is his daughter Robyn (Honor Kneafsey); an adventurer who yearns to be out there with her father rather than being left alone in a place she isn’t really welcome. Robyn is the point of view character and embodies many of the common traits associated with a newcomer to a strange land. She’s very much an outsider who doesn’t fit into her new surroundings, local kids make fun of her because of who she is and where she comes from and she has a boundless curiosity that allows the story to progress. When sneakily following her father into the woods Robyn meets Mebh (Eva Whittaker); a wild girl who has mysterious powers that include healing, control over a Wolf pack and a Wolf form that she generates when she sleeps.

A lot of the film focuses on the connection forged between Robyn and Mebh. It’s wonderful to see play out and how their friendship impacts the story being told. Wolfwalkers trades in some very clear binaries in the way its tensions are outlined such as father/daughter, England/Ireland, city/forest, mankind/nature among others with Robyn and Mebh representing many of those tensions in their relationship. The two young women bond over their mothers with Mebh’s mother’s Wolf form having not returned to her body and Robyn having lost her mother back in England. Robyn quickly wants to helm Mebh find her mother because she knows the impact such a loss had on her and doesn’t want to see it happen to anyone else.

Structuring the film around this friendship and the shared goal the young women have allows for an excellent exploration of the world it inhabits. Lessons about tolerance, acceptance and finding the right balance between societal progress and the natural world appear naturally throughout with the children and their innocence being the perfect perspective to question the world around them. It’s familiar territory especially for animated films aimed at children but there’s no denying the skill employed in getting the point across. It also doesn’t shy away from the unfortunate fact that two idealistic children reaching a shared understanding of a better way to live isn’t enough to change the world because of the abundance of factors that work against the lessons that they learn. The sobering realisation that reaching a shared individual understanding isn’t enough to change the world by itself is perhaps heavy for young children but its inclusion adds to the complexity of the narrative and demonstrates the willingness to respect the audience to accept that complexity.

Trimming the runtime of the film would have been to its benefit as the second act has some noticeable lag with some repetitive content that wasn’t really necessary. A slightly tighter narrative would have allowed the story to flow more succinctly and strengthened the ideas on display. The lag is relatively minor and overshadowed by what amounts to sheer excellence in every other aspect. 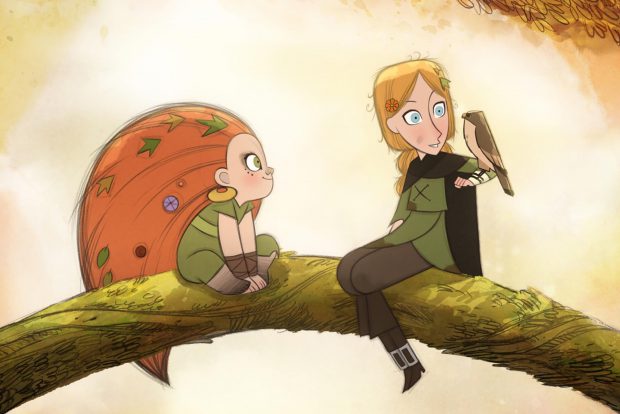 A visually stunning, narratively complex and meaningful exploration of friendship, support and finding a balance in a divided world. The central friendship between the two young women against the backdrop of tension in a magical world carries the film’s narrative wonderfully. The world itself is complex and the animation supports that by being so intricately detailed. Some of the lessons learned are heavy for the intended young audience though it demonstrates a respect for the audience in accepting that complexity. Trimming the runtime of the film would have benefited it as the second act does lag somewhat but it’s a minor issue and overshadowed by sheer excellence in every other aspect.