Vacationing sisters have their holiday turn deadly when they find themselves trapped in a cage at the bottom of the ocean with dwindling air and circling Sharks to contend with in Johannes Roberts’ 47 Meters Down.

Lisa (Mandy Moore) and Kate (Claire Holt) are sisters with opposite personalities. The cautious label is placed on Lisa where Kate can be described as free spirited. They are on holiday in Mexico because Lisa recently got dumped by her boyfriend who apparently found her too boring to be in a relationship with. It’s harsh and only really makes sense as an expositional statement to define the major difference between the sisters other than the colour of their hair. Kate takes it upon herself to help Lisa prove that she can be fun so convinces her to try swimming with Sharks.

As setups go it isn’t a bad one but the film does take its time getting to the point where the two girls are in the cage and fearing for their lives. The early moments involve a lot of clunky dialogue and dull scenes where the girls dance in nightclubs. There isn’t enough work done on the characters to make these scenes worthwhile viewing so the film might have been better off simply starting with the underwater portion and establishing the characters as they deal with that situation. 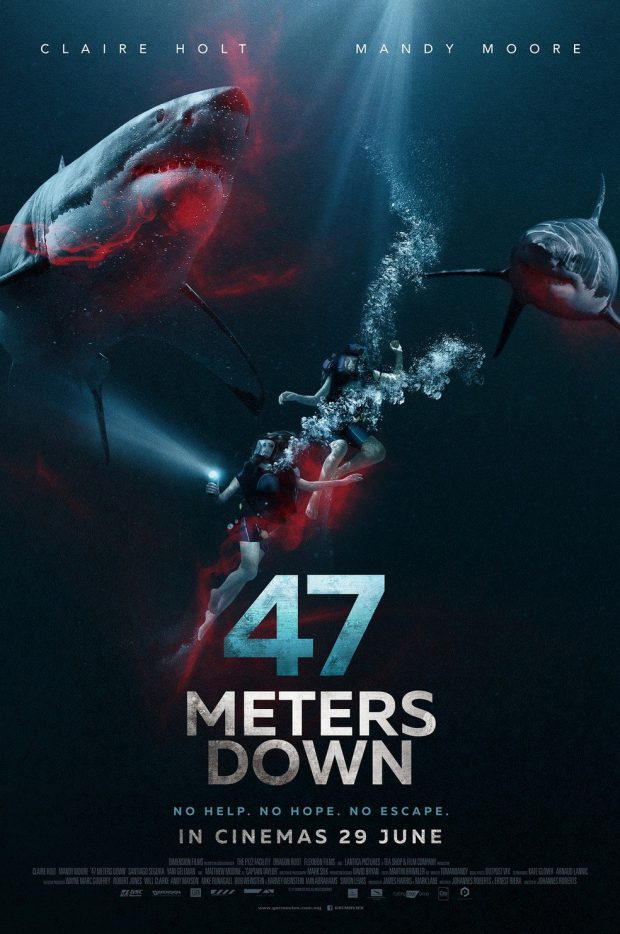 Once the jeopardy begins the relative boredom of the earlier scenes falls away and gives away to some pretty effective tension. There is a lot of terror to be mined from the isolation that the situation brings. The sisters manage to avoid being useless scream queens with each of them proving themselves competent at different points.

The film is built on a ticking clock as their limited air supply quickly runs out as they wait for rescue. This isn’t always handled with any subtlety as the characters look at the dwindling air gauge and read the information that is plainly evident to see. Reminding the audience that time is running out is a solid way to reinforce the tension but having the characters read the information when it can easily be seen lessens that somewhat.

Another lingering threat is the Sharks. They are used often enough to be considered a significant threat but aren’t overused to the point that continued survival becomes comical. Some of the close calls are a little far fetched but they are still a terrifying threat that hangs over the film. Sharks will always be terrifying and this is taken full advantage of here.

Visually this film has some interesting things going for it. The dimly lit undersea setting is used effectively with poor visibility for both the characters and the viewer as darkness surrounds the sisters suggesting that the threat is just out of reach. Light is used to signify safety throughout and it’s really effectively done. The absence of light adds to the terror and any light source can clearly be seen to be bringing hope.

As with the beginning the ending drags out far too much with a conclusion that is massively telegraphed to the point that it has no impact. It robs the concluding moments of any real suspense and prevents investment in the events playing out on screen.

A solid if unremarkable horror experience that has some interesting visual touches, builds suspense effectively and has characters who remain fairly competent in the situation at hand. Sharks are always a good source of horror and aren’t overused here. Using light as something that is synonymous with hope is a particularly impressive touch that carries throughout the film. The film falls down in the bloated opening and conclusion where the characters aren’t interesting enough to justify the time spent on them in the opening and a clumsily telegraphed aspect to the conclusion that robs it of any real suspense.