A Cure for Wellness

A young executive is sent to a “wellness centre” for the super rich to retrieve the CEO of the company he works to clear up accounting regularities but he soon finds that the facility isn’t what it seems in Gore Verbinski’s A Cure for Wellness.

The best way to describe this film is “weird” which admittedly is a really vague word but the experience itself is very vague. I spent a lot of the film trying to figure out what I was actually watching and that definitely adds to the overall beauty of the viewing experience.

It’s very much a thriller by design with a central mystery revolving around the fact that there’s clearly something untoward going on at the wellness facility with only one person apparently noticing it. Verbinski has a lot of fun with this by suggesting that Dane DeHaan’s Lockhart might be imagining things but keeping the audience on the edge of their seat by having various bizarre things go on that just can’t be ignored.

Dane DeHaan is great at playing the exasperated victim of this with his exploration of the facility forming the basis for the story. There’s a lot going on from the suspicious water to the uncanny way the people act and DeHaan is always ready to throw in an over the top reaction to echo down the facility’s less than inviting halls. There’s a growing sense of unease to DeHaan’s performance that proves infectious to the audience. 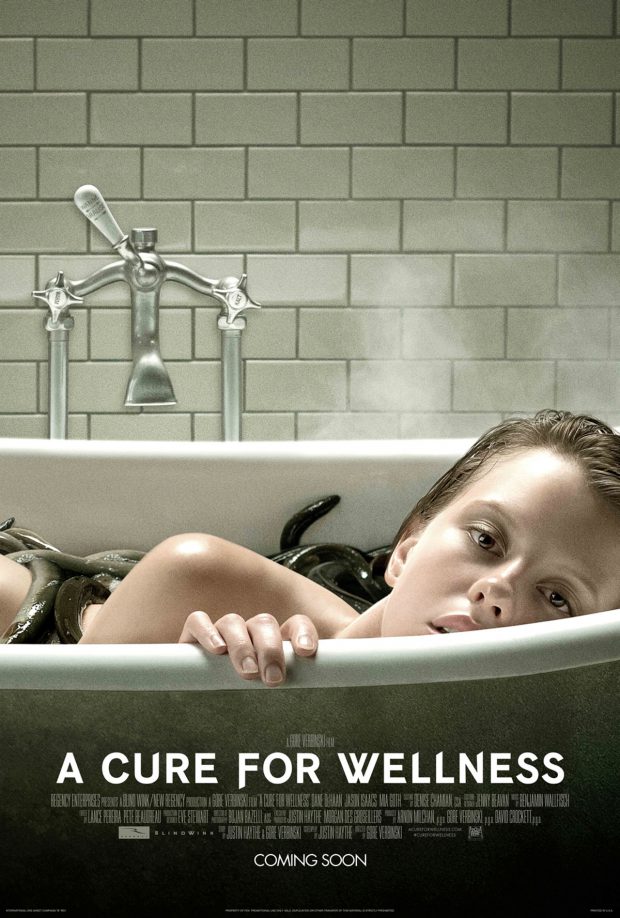 The film is beautiful to look at with pretty much every shot being well crafted and deeply ominous. I love how the facility offers so much variety in the various rooms and chambers with the slow reveal of the darker side of it. Well lit and expansive exterior shots contrast with the dim and echoey hallways creating a palpable sense of dread. It all contributes to the bizarre journey Lockhart goes on and lets the audience drink in the tension.

There are some really memorable images such as the use of eels throughout to suggest danger. Their slimy skin is unnerving on its own and the way they group together to overwhelm characters helplessly submerged in the water can’t help but be unsettling. The constant depiction of frail old people as a counter to the promise of perpetual health is really effective as well.

Other characters contribute to the unsettling tone as well. Jason Isaacs plays a Doctor who seems far too nice for his own good at first with the uncertainty as to his true motivations building slowly and organically as the film progresses. Isaacs has always been good at playing duplicitous characters and this is yet another great example of that. The calm and measured way he talks in contrast to DeHaan’s over the top exasperation contributes to the overall mood.

Mia Goth is another great addition as the “special case” Hannah. She is the only character in the film close to Lockhart’s age and the mystery surrounding what caused her to be the way she is adds into the tapestry that this film creates. There is clearly something not right with her but there are moments of lucidity that suggest an external force is causing this. It’s an engaging mystery and Mia Goth seems to have a lot of fun with the varied behaviour the character exhibits.

Despite the mystery being well developed and the tone adding to that the actual resolution feels somewhat rushed and uninspiring. It’s something that is fairly easy to predict if you’re paying attention to some clumsy foreshadowing throughout and the end of the film is far from satisfying. It’s a shame that it ends in such an underwhelming way considering how impressively layered the film was up until that point.

An attempt is made to comment on the “sickness” of the modern world where people are motivated to work themselves into an early grave due to stress and other factors in the pointless pursuit of wealth and perceived power. There’s nothing wrong with the sentiment but the argument is handled in a fairly clumsy way. This is most likely due to how late in the film it is introduced and the lack of time taken to actually develop it. It could have been the perfect mirror to hold up in Lockhart’s face but the handling of it wasn’t strong enough to allow that to happen.

A weirdly compelling film that does a great job establishing mood and tone with a central mystery that is well developed. Dane DeHaan is really good in the lead role and is always able to provide the necessary exasperation to contrast the placid nature of everyone around him. Jason Isaacs plays a really unsettling antagonist and provides the perfect contrast to DeHaan’s over the top reactions.

The film looks great with lots of really powerful imagery throughout. Pretty much every shot is gorgeous and there’s a lot of variety in the locations to build unease as Lockhart explores the facility. It’s a shame that the resolution to the mystery is less than satisfying because everything leading up to that works very well.