Ridley Scott returns to the Alien franchise with a film that doubles as a sequel to the much maligned Prometheus and a prequel to the celebrated Alien with Alien: Covenant.

The Alien franchise is a strange one. It’s both important and iconic but there are only two universally recognised legitimately good films out of 7 -if you include Alien vs Predator and Alien vs. Predator: Requiem– with this film being the 8th entry. If you want to hear us talk about Alien and Aliens then I’ve hyperlinked the podcasts for you.

Like most I wasn’t a fan of Prometheus because of its abundance of plot holes and uninteresting characters so the prospect of a film that acknowledges it in any way wasn’t outwardly appealing but I do like the idea of seeing Xenomorphs again so there was something to look forward to.

To be blunt this film isn’t good. Some of the cinematography is nice to look at and Michael Fassbender’s performance is impressive but outside of that there is almost nothing to recommend. It seems that Ridley Scott is only as good as the script he’s directing and this was most definitely not a good script.

The story is that there is a colony ship called the Covenant on its way to terraform a planet that seems well suited to accept a human colony. Along the way they come across a signal that seems human in origin and head to the source to investigate it. When they get there they find that the planet is perfect for human colonisation but there is a notable disadvantage of it being home to things that want to kill them. 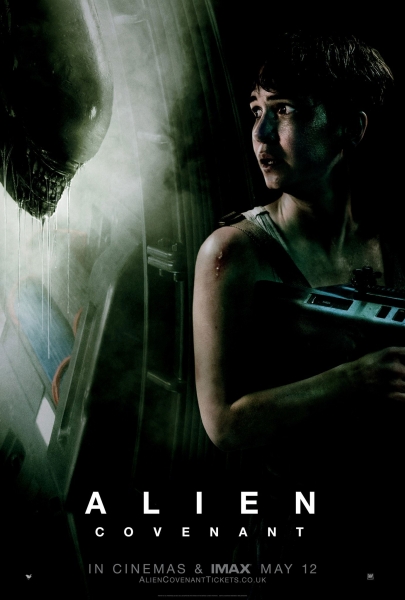 I was slightly onboard with the film in the first 20 minutes or so. The premise seemed to resemble the first Alien where characters were swept up in circumstances that had them killed one by one but things went quickly downhill. It’s hard not to compare this to Alien but it’s important to highlight why this film doesn’t work and Alien does. The main reason early on is the dialogue. In Alien the characters talk about things like overtime and bonuses telling us that they are financially motivated and the dialogue in general feels very natural which endears us to them even if they aren’t all likeable. Alien: Covenant has characters tell us how they’re feeling and deliver reams of expository dialogue that only serve to explain the plot to each other. For the most part any of the lines could be said by any of the characters and the film would be no different.

The exception to this is Walter (Michael Fassbender) who largely avoids this early on but even he descends into that as the film progresses. Fassbender is an excellent actor and does a very good job here he doesn’t get much of an opportunity to deliver anything that qualifies as interesting. The other actors are wasted in roles that are frankly beneath them as well.

It’s clear that this film is modelled on Alien in many ways because the setup is very similar and it isn’t immediately clear who the main character is which makes predicting the survivors a little more difficult. As the film progresses it’s painfully obvious who is going to die and when but the setup feels familiar which isn’t necessarily a bad thing if done well.

One of my major issues with the film is how stupid the characters are. They head to an unknown planet that has a breathable atmosphere but fail to consider all of the things that could potentially kill them. The early planetside threat starts with tiny organisms that could easily be blocked by simply wearing a space suit. It’s very common in horror movies for characters to end up dead because they’re stupid and careless which can almost be forgiven when they aren’t supposed to be experts in their field but the characters here are supposedly well trained yet fail to take simple precautions like wearing protective gear when entering an unknown environment.

From then on it’s one stupid decision after another when characters decide to go off on their own or unsafely explore potentially dangerous discoveries so all of the deaths can be put down to a lack of common sense which makes it very difficult to invest in the characters.

This film also fails on the most basic level when it comes to the horror. One thing the original Alien did very well was build up the suspense by making the life cycle of the Xenomorph part of the horror. In this film the life cycle is massively accelerated which means that there is no time to create any sense of tension or suspense. Everything feels rushed and nothing about it is particularly terrifying.

Even ignoring the other films in the franchise the film would fail as a horror film because everything happens far too quickly. The Xenomorph tears through people before the impact of it being there can be appreciated. There are no scenes where people are jumping at shadows or unexplained noises that could mean death. A scene begins, the Xenomorph appears and then people are killed. It’s a complete disservice to one of cinema’s greatest monsters.

This film isn’t merely a horror film and that’s part of the problem as the focus is really muddled. There are some high octane action sequences that are laughable to watch and make absolutely no sense. Some of the imagery is pretty gory which might appeal to those who enjoy gore but it isn’t deployed particularly well either. I wasn’t sure what this film was supposed to be and the combination of different factors didn’t work at at all.

A terrible film that fails on pretty much every level. The characters are moronic monster fodder despite being established as highly trained and most of the dialogue amounts to explaining the plot. Danny McBride’s Tennessee is the only one with any personality but he suffers from a lack of screen time. Most of the deaths occur as a result of stupid decisions. The film fails as a horror because no time is taken to establish any sense of tension. Everything happens far too quickly and the impact of the Xenomorph isn’t given the time to be appreciated. Part of this might be down to the fact that the film tries to be both a horror film and an action film so it fails at both. The action sequences are laughable nonsense and no amount of pretty cinematography can hide the lack of quality on display here.