A pilot is recruited by the CIA for various covert jobs at the same time he becomes a drug runner for a noted Cartel in Doug Liman’s American Made.

Tom Cruise takes the lead as Barry Seal; a pilot with talents that are very much wasted working on a commercial airline. This changes when he is recruited by CIA Agent Monty Schafer (Domhnall Gleeson) to do various jobs for the US. Naturally these jobs are off the books and Seal constantly risks being captured by the proper authorities. Doubly risky is when he takes the job of Cocaine smuggling courtesy of Pablo Escobar and essentially plays both sides off each other.

A role like this is perfect for Tom Cruise. He is so effortlessly charming in the bulk of his other work that playing a character who is convincingly playing both sides while getting away with it is perfectly suited to him. Lately it is common to see Cruise flex his action muscles so seeing him tackle something more character driven is very refreshing and reminds us of how good an actor Tom Cruise is.

His performance manages to cover up the fact that Barry Seal isn’t that well developed in the context of this film. He’s charismatic, ambitious, intelligent, resourceful and not an awful lot else. There was definite scope to explore what makes Seal tick as a person and develop what motivates him to carry out these increasingly risky missions. Shades of a story about a man corrupted by his own arrogance as he continually expands beyond the point of acceptable risk are in here but aren’t covered in any great detail. 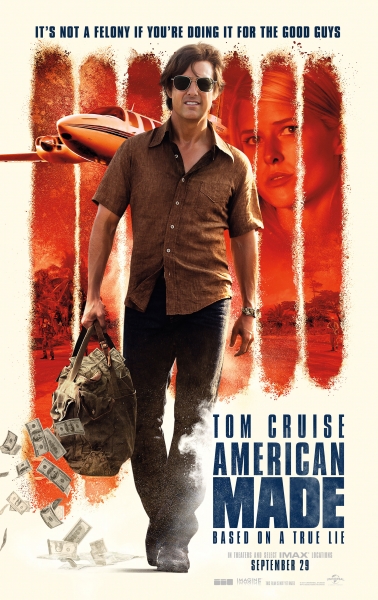 Seal’s wife Lucy (Sarah Wright) suffers even more and fades completely into the background more often than not. The implication is that Barry is doing all of this for his family but without developing the family angle it doesn’t really come across. Lucy just doesn’t have an awful lot to do in the story despite the subplot involving her brother Bubba (Caleb Landry Jones) attempting to add depth to her situation. Sadly this plot comes and goes in a matter of minutes leaving little lasting impact.

Domhnall Gleeson is also great here. He makes Schafer wonderfully slimy and always presents the appearance of a man who should not be trusted. He appears often enough be important but not to the point that he feels overused. His scenes with Cruise make for great viewing and there’s an air of mystery about the character that comes across really well.

Most of the shortcomings can be attributed to the speed of the plotting. The film burns through story very quickly as there is a lot about the true life events to cover. As a result it means a lot of the interesting characterisation is left behind as the film moves onto the next thing. Focusing on a particular aspect of Barry Seal’s questionable career might have made for a stronger film as more time would have been allowed to add the necessary detail.

Similarly the moral questions are all but ignored. Barry Seal is causing a lot of damage to the areas he is smuggling to because of his cargo but the moral implications of that aren’t addressed. It would have been interesting had someone taken stock of what the impact of his smuggling really is to innocent people and the areas as a whole. This is something the Nicolas Cage film Lord of War did particularly well and there was similar potential here.

Despite the shortcomings the film is incredibly entertaining. As I’ve said, Cruise is a good fit for the film and the whole thing moves along at an impressive clip so that it never feels like it is lagging in any way. There are many tense sequences as Seal finds himself hunted by various agencies and the overall tone is very light which makes the film really easy to watch. It may be largely superficial but it hides the flaws behind a really stylish presentation.

A solid film that has a lot of unfulfilled potential. The main problem is that the film burns through plot so quickly that there isn’t time to cover the more nuanced aspects of Barry Seal’s career. A swift pace means that the film remains interesting but there are shades of an interesting morality driven story that are never given the chance to develop. Similarly the characters feel broadly underdeveloped though Tom Cruise’s natural charisma covers that up well enough. It’s a superficial film hiding its flaws behind a stylish presentation.