Justin Kurzel takes on the troublesome task of adapting a popular video game series into a movie in his version of Assassin’s Creed.

Conceptually this shouldn’t be all that difficult as the gimmick of using technology to relive ancestral memories is simple enough and has a lot of potential to craft layered stories that take place in different time periods.

Unfortunately this film largely squanders that opportunity with a story that manages to be fairly dull when all is said in done. The protagonist is Callum (Michael Fassbender); a murderer on death row who happens to be descended from a long line of historically significant assassin’s so is snapped up by the mysterious Abstergo corporation so that they can use him to find an artefact that will allow them to change humanity on a fundamental level.

In video game terms – the whole thing is a fetch quest which isn’t a bad foundation to build the story on and the film does a good job of outlining the goals early on as well as building its world. We learn enough about what’s going on through some awkward yet informative exposition and we’re introduced to the device that allows Callum to relive the memories of his ancestor Aguilar (also Michael Fassbender) during the Spanish Inquisition. 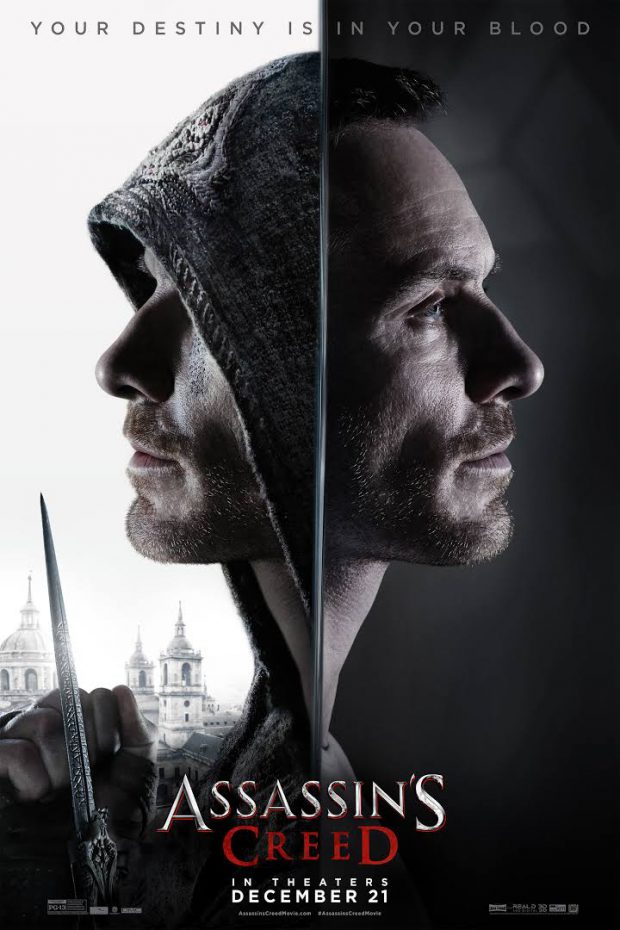 Once the setup is over and the film gets into the meat of the story things get significantly less interesting. I mentioned above that the film squanders the opportunities created by the conceit of reliving ancestral memories. This is wasted because almost nothing is done about them. The time period wasn’t significant in any way and seems to have been chosen completely at random for all the bearing it has on the rest of the narrative. Aguilar isn’t a character at all which means that it’s difficult to be invested in anything he does since he is only a vehicle for the historical action sequences.

There was a real opportunity here to build a layered story that shows Callum’s similarities as well as differences to his ancestor and have these change him in fundamental ways. That is basically what happens but we don’t see any of it happening so it feels meaningless to me. I actually had to look up Aguilar’s name since the film isn’t interested in developing him at all.

Michael Fassbender does a good job in the role. Callum is a pretty damaged character and his reaction to having his head messed with in this way is believable enough. Fassbender also carries himself well in the action sequences so he’s fairly believable all round. Callum isn’t an especially well developed character either but we find out enough about him to get by.

Marion Cotillard is somewhat wasted in her role but does get some memorable moments. Her acting talent makes it possible for her to work with any material she’s given and make it believable. Nothing about her performance stands out but it is good enough for what is being presented here. Her character does have some depth when she questions what she is doing and sees the people she works for from different perspectives but the film doesn’t really do much with it.

Jeremy Irons is your standard moustache twirling villain and he takes to it like a duck to water. Despite how thin his character is I couldn’t help but be captivated by his casual villainy. His goals are clear and Irons delivers exactly what he needs to for a role like this.

The story wasn’t all terrible but it was fairly dull. It opens fairly strongly but lags considerably in the middle and never really recovers from that. I liked how the conflict between the Assassin’s and Templars was framed with neither side seeming all that appealing but it needed a lot more development than we got. This is another area where the ancestral memory scenes could have been used to greater effect. There were hints at complexity in this conflict but they never rose above being hints.

A big problem was the way the film was structured. It was so obviously built around exposition leading to action and continues down this path until an admittedly surprising conclusion that comes from a more character driven place. It was the biggest surprise in the film and I wish more care had been taken with the rest of it.

I found the action to be hit and miss. It looked good enough but was hurt by far too much rapid cutting that made some of the sequences very difficult to follow. The use of shaky cam didn’t help matters either but the things that could be made out were well done. It won’t be remembered as one of the greatest examples of action put to film but it was competent enough at least.

It would be unfair to say that this film was terrible but I found it frustrating as there was a much better film trying to claw its way out. The mid section of the film lags and it never recovers from that. Anything interesting is surrounded by how dull the rest of it is and the premise of reliving ancestral memories is sadly wasted. The action is competently handled but the rapid cutting and shaky cam brings that down and there’s nothing especially interesting about the characters either. This could have been so much better but it’s another example of a poor video game to movie adaptation.