An undercover CIA agent is sent to Berlin during the Cold War to recover a list of double agents in David Leitch’s Atomic Blonde.

The first thing that stands out about this film is the sense of style. A Germany divided by the Berlin Wall is faithfully recreated in a way that almost makes the setting a character in its own right. The streets look cold and uninviting while the interiors are dimly lit with the threat of ambush always lurking around the corner. The moody and well developed setting establishes the tone in a really effective way and sets up an unfamiliar scenario for the lead character.

Charlize Theron plays Agent Lorraine Broughton and she does a great job. There’s never any doubt over her capability to handle the situation and her skills are made apparent through her actions. Theron even has the opportunity to inject some depth into the character when the film takes some time to introspectively explore how she feels about the rapidly deteriorating situation. 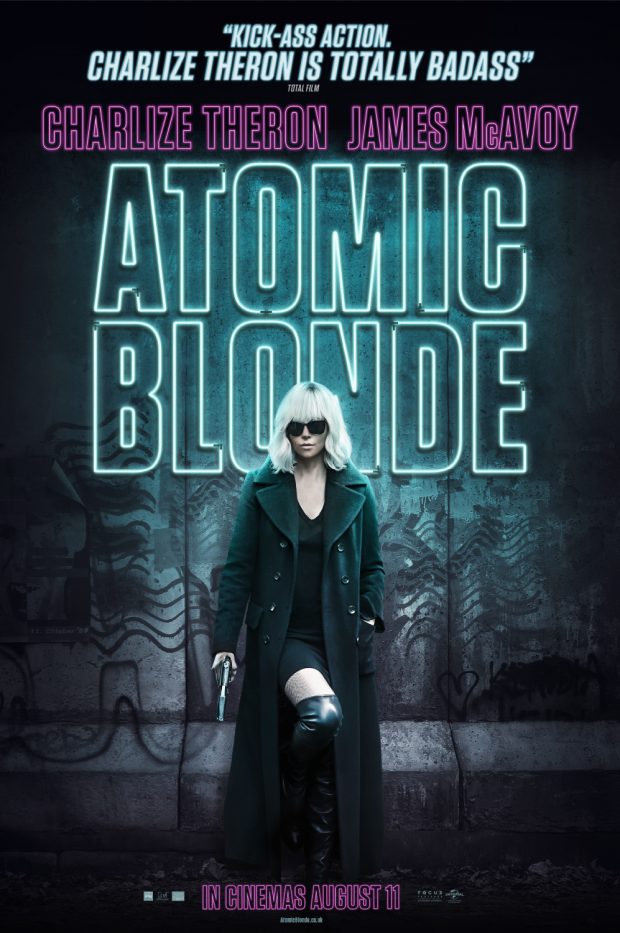 It has been apparent for a long time that Charlize Theron has what it takes to take on the role of an action lead. Her recent stint in Mad Max: Fury Road more than proves that and this film proves to be another impressive showcase for her abilities. Her physicality is constantly believable and the attitude she projects matches the requirements.

The action sequences are routinely excellent with impressive stunt work, believable stakes and enough variety in the locations to keep them from becoming stale. A lack of shaky cam and a good sense of geography to them make them easy to follow while showcasing the talents of those who put them together.

When Atomic Blonde spends time on the spy thriller portion of the story it is far less impressive. The story itself is hopelessly derivative as it follows the efforts to retrieve a list of spies before they fall into the wrong hands. It wouldn’t be an issue if it was well told but it isn’t. There are various double crosses and misdirects to keep the true villain in hiding but none of it is that interesting so the time between the action sequences feels like a slog to get through.

It’s a shame as the film boasts an excellent cast. James McAvoy does a good turn as a sketchy informant while Toby Jones and John Goodman are well cast as Lorraine’s superiors. Most of the cast outside of Charlize Theron are wasted to a degree but there’s no denying that everyone does a good job with what they’re given and they work well together as a collection of characters. Sofia Boutella is noteworthy as fellow agent Delphine Lasalle. Boutella does a great job playing her as naive yet badass in her own right and there’s a built in tragic aspect to the character that was interesting while demanding further development. The romantic subplot between Lorraine and Delphine feels awkwardly tacked on though and there is a love scene that exists purely to titillate the viewer in a way that just feels uncomfortable.

A mixed bag that is at its best when leaning into its potential as an action movie. Charlize Theron is perfectly cast and is effortlessly believable as a skilled CIA Agent. She’s a great fit as an action hero and has plenty of opportunity to show how capable she is in this space. The rest of the cast are underused but all do a great job and bounce off each other well. Sofia Boutella is especially noteworthy as she tows the line between naive and badass believably. The romantic subplot between Boutella and Theron’s characters feels awkwardly tacked on and there is a love scene that feels completely gratuitous. The film also suffers in the execution of the spy plot as it isn’t that interesting to watch nor does it do anything clever with the fairly standard narrative.