DC offers up another animated adventure in Sam Liu’s Batman and Harley Quinn.

Despite being a fan of the DC Animated movies I’ve never actually written about them. The overall quality of them is somewhat mixed but I enjoy them for the most part. Adapting DC’s back catalogue of stories in animated form is a really good way to bring these stories to a new audience and there are often interesting choices in casting actors to voice the characters. In many cases they are voiced by actors you could never imagine physically portraying the role but are able to absolutely nail the vocal performance. The animated movies are also a good way for writers to try out some fresh stories without Warner Brothers spending fortunes on big budget films. In short I think they’re a great idea and the execution is solid enough for the most part. 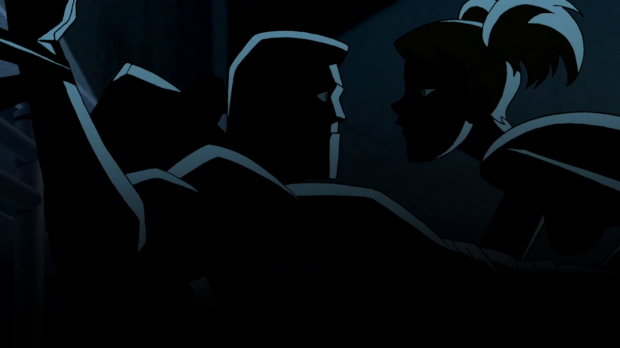 Nightwing gets more than he bargained for

Batman and Harley Quinn technically qualifies as an original story though it could also be argued that it’s a fairly generic Batman story. The plot isn’t particularly interesting or original on its own and none of the characters are profoundly changed by the experience. There’s nothing necessarily wrong with that as there are countless comic book issues that basically exist to fill pages but it all does come down to execution.

This film feels like a visual sequel to the excellent Batman: The Animated Series from the 90s. To my mind that’s always a good basis as I loved that show and it has a distinct visual identity that endures to this day. The animation style here reminded me of that show but also felt nicely updated with good use of CGI to make the movements more dynamic while giving the production a more crisp and modern look. It could be said that it subtly modernises the style of Batman: The Animated Series while remaining faithful to the iconic visuals.

Reminders of Batman: The Animated Series don’t end there. Kevin Conroy returns as Batman and Loren Lester returns as Nightwing which definitely adds to the idea that this could be a sequel to that series. That thought doesn’t entirely work as the tone is a lot more light hearted than that series generally went with which makes it feel more like a hybrid between that and the Adam West Batman series. It is a bit darker than both with some profanity and general adult humour but tonally it does feel like a hybrid of the two and it actually works very well.

My personal feelings on Batman as a character are somewhat complex. I like him when he’s written well but dislike how heavily DC relies on him. The majority of the animated movies are either Batman stories or feature him heavily. It has reached the point where I’m more than a little sick of the character and eager to see something new. You might think that this film might not be fore me if that’s what I want but it did find a way to create something that felt refreshing. 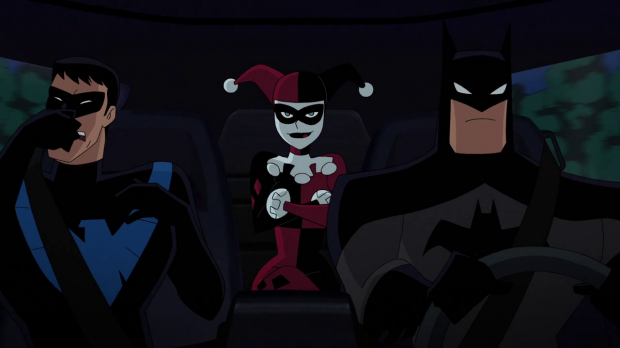 It’s not Batman who smells

Batman is defined as being dark and brooding to many people which definitely feeds into this film in a big way. Kevin Conroy’s vocal performance suggests a man who doesn’t put up with any level of nonsense. He’s focused on the task and doesn’t indulge any diversions. That is something I’ve seen done a lot and depicting Batman as a joyless character is something that irks me about many adaptations featuring him. I was glad to see that this film makes his serious nature part of the joke. It never gets to the point of becoming parody and is used really well throughout.

One thing I really liked is that Batman’s sense of humour is operating on a different level to the rest of the film. Conroy’s practiced vocal performance allows him to deliver a line in such a way that it’s clear Batman doesn’t mean it seriously but it still comes across as intimidating. It’s a very complex performance that works wonderfully in tandem with the writing. It allows Batman to add to the comedy while still feeling like it matches his character.

Batman’s deliberately stoic nature makes Harley Quinn (Melissa Rauch) the perfect foil for him in many ways. She is constantly cracking wise and saying inappropriate things to provoke a reaction. Harley is testing Batman’s limits and his resolve never wavers to give her any level of satisfaction. It’s a fascinating dynamic and works really well.

Nightwing is the audience surrogate. His role in the film is to be carried by the plot but do little to actively contribute to it. Most of his actions are dictated to him by Harley or Batman in one way or another and he spends a lot of the time commenting on things that are going on as well as being the butt of many of the jokes. I don’t mean this as a criticism as it works in the context of the overall story but it does qualify as a partial misuse of the character as well. 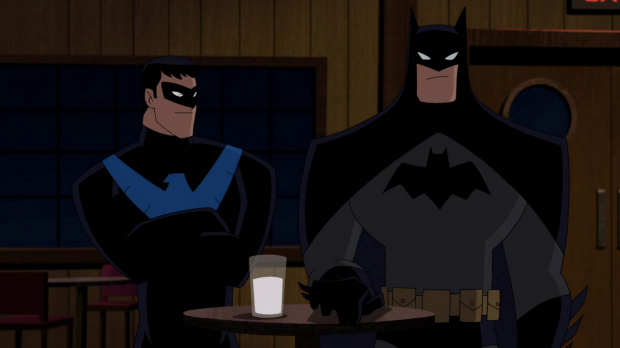 To cut Nightwing from the plot entirely would be a significant loss though. Playing the sidekick to Batman is important to shine a light on Batman’s methods and his bizarre relationship with Harley creates many genuine laughs throughout. I do wonder if the only reason Dick Grayson is Nightwing rather than Robin in this story was to conjure up the image of an adult to make a comically slanted sexual encounter less creepy than it would have been if the Boy Wonder had been involved

There are two villains here in the form of Poison Ivy (Paget Brewster) and Jason Woodrue aka the Floronic Man (Kevin Michael Richardson). Generally speaking they fit the tone of the film pretty well but aren’t really all that threatening. Poison Ivy was an obvious choice as it allows the film to take advantage of the historic friendship between her and Harley. It works really well without leaning on exposition. The viewer is expected to accept that they have a history and go from there which is definitely the better approach when attempting to maintain a brisk pace. The villain story could have been a bit better and presented more of a challenge but what was delivered was good enough.

I really liked how the film told the story. The focus was on the characters with the narrative being something of an afterthought. Batman’s rich and varied history is thankfully left mostly in the background with a few jokes coming at its expense. The film manages to deliver a lot without any dialogue especially when it comes to Batman’s reactions. The intention comes through clearly and shows a lot of intelligence when it comes to the overall construction of the film.  Much of the dialogue is sharp and hilarious as well so it definitely delivers on multiple fronts.

My major issue with the film is with Melissa Rauch’s vocal performance as Harley Quinn. It isn’t a bad performance as such as it manages to be nicely layered at points but something about it doesn’t quite fit for the Harley Quinn character. She does bounce off the performances of the other voice actors but there was probably a better choice for Harley Quinn out there. 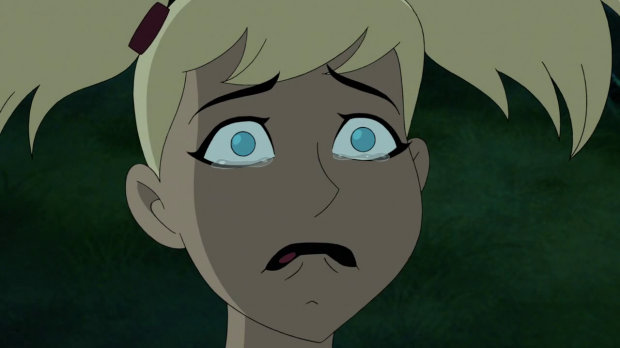 Another problem is that the action sequences aren’t all that interesting to watch or creative in their execution. In some cases that is the intention but the climax feels oddly devoid of any meaningful spectacle which is a shame given the potential afforded by the animation style and the clear skill possessed by Batman, Nightwing and Harley Quinn.

A witty, clever and wonderfully executed entry into the DC Animated film series. It’s great to hear Kevin Conroy back as Batman with refreshingly original ways to play with audience expectations of the character. The animation style is familiar with impressive updates and the story is very well told with welcome focus on the characters involved. Humour is used really well in the story and plays to the strengths of the characters involved. The film could have done a better job making the villains more threatening as well as delivering on more entertaining spectacle. I also feel that Melissa Rauch is perhaps the wrong choice for Harley Quinn despite delivering a good performance and bouncing off the other actors well. There’s a lot of entertainment value here and it shows that there is fun to be had with Batman’s stoic nature.