A squad of soldiers is honoured by appearing in a Thanksgiving football game Halftime show after becoming a symbol of hope for the American people in Ang Lee’s Billy Lynn’s Long Halftime Walk.

Contrast is what underscores this film. For these soldiers the glitz and glamour of a the celebrity focused halftime show couldn’t be more different than their experiences of fighting in Iraq. Ultimately the contrast between the two is what this film focuses on.

The protagonist is Billy (Joe Alwyn); a 19 year old soldier that the film follows as he experiences the day he and his squad appear in the show. He wrestles with the psychological effect the War has had on him and struggles to deal with the unrealistic perceptions that others have of what actually goes on when fighting in Iraq.

Billy is an engaging character. He has seen so many horrors but still retains a certain amount of naivety about how the world works. Life as a soldier is something he clearly understands but the glamour of the event he is now involved in is completely alien to him. Joe Alwyn does a great job of bringing all of this across and creates an interesting layered character that is engaging to follow through the film.

The main narrative takes place over a single day which proves both effective and hindering. For Billy and the rest of his squad it feels like a really long day full of so many different things that they need to attend as part of the effort to honour them. It’s an overwhelming experience and that comes across really well. On the other hand a lot of the film feels slow and uninteresting with endless scenes of the characters having conversations that really aren’t that interesting to listen to. 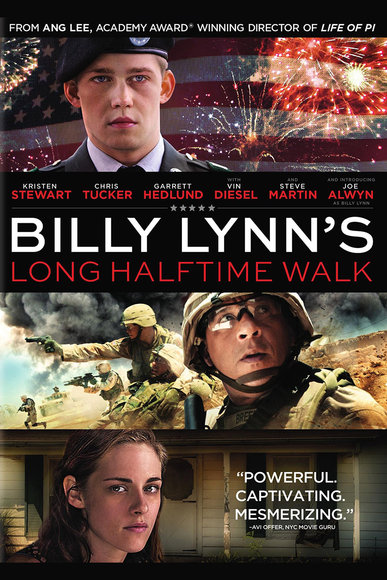 Flashbacks expand the scope of the film by depicting the mission that resulted in them becoming honoured. Contrast comes into this as well as the characters feel conflicted over being celebrated for what amounts to the worst day of their lives. They are being honoured for a mission that resulted in the loss of a member of their squad which doesn’t seem quite right to them. These flashbacks work really well and give the audience a welcome break from the mundanity of moving from place to place performing their expected celebrity duties.

Other flashbacks show Billy’s relationship with his family and particularly his sister Katherine (Kristen Stewart) who served as his motivation for joining the military in the first place. It’s an engaging brother/sister bond that doesn’t quite get enough time to breathe purely because it lacks the necessary screen time to flesh it out as much as it should.

There are some moments of genius throughout the film such as a press conference where Billy imagines the questions being answered honestly and the various noises that remind the soldiers of their time on the battlefield. The latter is fairly commonly seen in films about soldiers returning home after a War but it continues to be effective because the reactions of the characters is easy to latch onto. Billy really struggles with this as can be seen through Joe Alwyn’s performance.

Other things don’t quite work. Billy’s connection with cheerleader Faison (Makenzie Leigh) is a really confusing one as their relationship develops from nothing to being really intense in a matter of minutes -real time as well as screen time- so it’s hard to invest in it as being something healthy. The depiction of the halftime show where Destiny’s Child are performing is unintentionally hilarious as Ang Lee makes sure not to show any of their faces. This goes on longer than it should and really draws attention to how laughable it is.

The actors broadly speaking do a really good job. Garrett Hedlund does a really good job as the uncompromising leader of the unit and Vin Diesel even delivers a somewhat thoughtful performance as a Wartime philosopher of sorts. His main role is to create the emotional connection between the halftime show and the event that led to it. Vin Diesel manages this well enough and this probably counts as the most engaging performance I’ve seen from him.

Chris Rock and Steve Martin are fine here for not being used very often. Most of their scenes are focused on the attempt to turn the story into a movie which ends up being something of a meta commentary on the depiction of War in films as well as the treatment soldiers receive after the conflict is over. There was a deeper story here that never quite comes out and doesn’t really amount to anything.

In general this film is one that struggles with identity. The day of the halftime show has a lot going on but it never quite focuses on anything. Is it a story about PTSD, soldiers not receiving the recognition they arguably deserve where celebrities are practically worshipped or the contrast between War and the perception of War? Contrast is the most focused on aspect but even that is diluted by everything else. There was potential for greatness in here that a tighter concentration could have achieved.

An engaging film that lacks a certain amount of focus preventing it from achieving greatness. Billy is a solid well acted protagonist who retains a level of naive innocence contrasted with his experiences. The glitz and glamour of the halftime show is shown as being overwhelming but there’s a large amount of mundanity to it that comes through effectively in some cases and slow paced in others. The use of flashbacks to flesh out the event causing the soldiers to be honoured as well as Billy’s relationship with his family are a nice touch but don’t quite hit the marks that they should. Other missteps such as the bizarre connection between Billy and the cheerleader Faison stick out. The other actors do a good job with Garrett Hedlund and Vin Diesel being the most memorable. Steve Martin and Chris Rock are underused despite their story representing a meta commentary on the value of soldiers against Hollywood sensibilities. With a little more focus this film could be great but as it sits the experience is very good yet problematic.