Mick Jackson’s Denial tells the true life story of the acclaimed writer/historian Deborah E. Lipstadt and the trial that questioned whether the Holocaust really happened after a denier sues her for Libel.

Deborah Lipstatd (Rachel Weisz) is committed to proving that the Holocaust happened because it’s important that history doesn’t forget the suffering endured by the Jews at the hands of the Nazis. Her arguments come from a place of passion but also truth. Rachel Weisz balances the emotional reactions with the fair minded approach she takes to trying to prove her position and delivers an excellent performance. This film is an excellent vehicle for her and allows her to show a wide range of emotions.

David Irving (Timothy Spall), the Hitler historian tasked with proving her wrong is more than a match for her in terms of presence. Timothy Spall is an excellent character actor and throws himself fully into David Irving. Initially it almost looks like he has some valid points but the more we hear the less credibility he has. The best way to describe Irving is that he’s pathetic and the film puts that across really well.

Tom Wilkinson as hotshot lawyer Richard Rampton is always excellent. Every scene is masterfully acted whether it’s the courtroom arguments or the more introspective character building scenes. He is a reasonable man who needs facts and doesn’t let emotion cloud his judgement. It’s the sort of role Wilkinson was born to play and he takes to it with ease.

Andrew Scott’s Anthony Julius forms another part of the legal team and Scott does an excellent job playing against type. It’s refreshing to not see him as a villain and he shares some compelling scenes with Weisz. His own opinions are largely guarded but shades of his personality do come through. It’s a wonderfully subtle performance that really does help carry the early parts of the film. 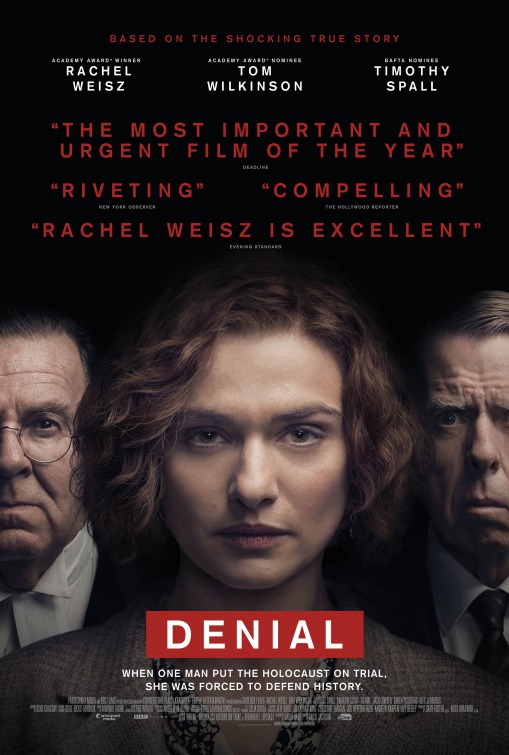 Broadly speaking this film is a courtroom drama and those scenes are the best. The arguments are presented in a compelling way and the acting is consistently excellent which helps keep them engaging. It’s also beneficial that the subject matter is presented in a really thought provoking way throughout so it’s easy to become invested in the drama taking place in the courtroom.

Obviously a film like this is beholden to the reality of the events which means that Lipstadt not being called as a witness is factually accurate but it hurts the film slightly. Lipstadt is the main character so having her almost entirely passive in the courtroom fells a little off. Much of this is made up by establishing her outside of that but it feels like a part of the film never quite lands in the way that it should.

There were some really effective scenes outside of the courtroom as well. A visit to Auschwitz is appropriately sombre and jarring to watch because the weight of history that hangs around that place is almost tangible even when put to film. It’s a powerful scene and the challenge of the facts when in that place creates a sense of shock in a way that reminds the audience that the way people were treated can’t simply be boiled down to clinical facts. It’s really fitting that this film be released on Holocaust Memorial Day as it does a nice job of memorialising it in a way that’s respectful.

Other scenes don’t hold up quite so well. There’s an abandoned subplot about members of the legal team doubting their desire to be lawyers and there are other scenes that feel largely unnecessary. When the film sticks to character development and exploring their motivations as well as the media reaction to the trial it’s great but when it tries to veer off in other directions it doesn’t quite work.

A well acted and well presented film that explores a fascinating subject through clear character opinions and motivations. The cast all perform brilliantly in their roles and the courtroom scenes are always compelling viewing. The arguments are presented well and the gradual development of David Irving actually being really pathetic works well. A scene exploring Auschwitz also manages to be really effective but other scenes not focused on the characters and their motivations don’t fare quite so well.