Kathryn Bigelow’s Detroit delivers a snapshot of the Detroit Rebellion by largely focusing on a specific event in 1967.

Refining the focus is a good idea as the Detroit Rebellion was huge with too much to cover in a single film. There are many accounts that could be explored in detail and the Algiers Motel incident is but one of these.

It takes a while for the film to get to that point as a lot of time is spent establishing context. A text filled animated opening sets the scene and the early part of the film works to show the scope of the rioting. These early scenes are really effective with a good use of shaky cam to show how chaotic the situation was. Acts of looting and violence are depicted with the intention of showing the dehumanising brutality on display and the streets of Detroit look like a Warzone. It’s clear that the intention was to hit the viewer with unpleasant imagery and bluntly show acts of barbarity inflicted on human beings to set the bleak tone that carries through the film. 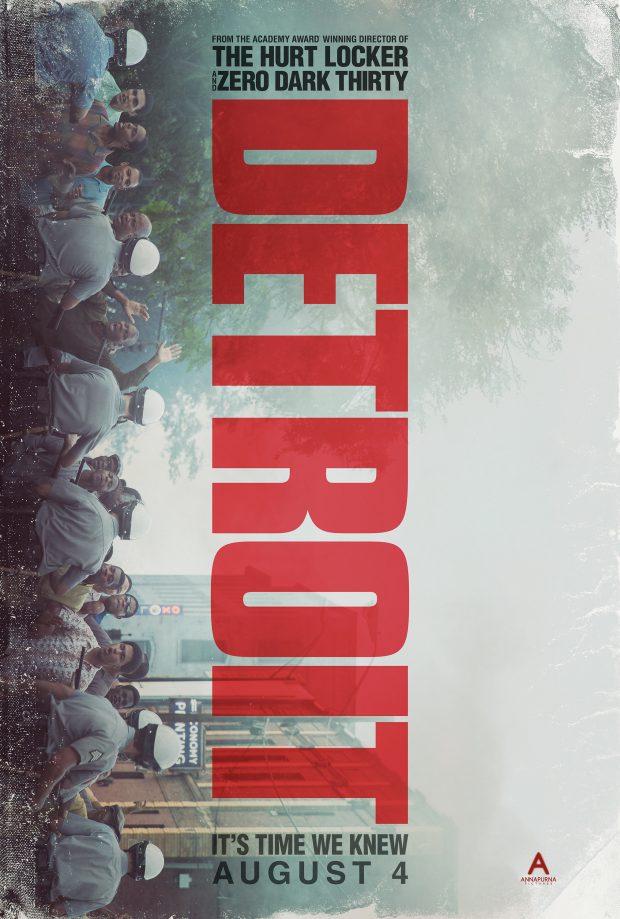 The film is at its best during the section set in the Algiers Motel. Tension is wonderfully built and maintained all the way through this extended sequence with the balance between physical and mental torture developed organically. A notable drawback is that the characters aren’t all that well developed but the relationship between torturer and victim comes across very clearly. There is no ambiguity from a storytelling perspective as to who is supposed to be in the wrong here. The police officers led by Will Poulter’s Krauss are heavily demonised by the narrative and Poulter does a wonderful job portraying a character that the audience should condemn. His violently racist attitude is his sole defining trait but it’s all the character needs for the purposes of the story. The root of the sequence is a simple good vs. evil struggle and Poulter’s performance confirms that his side is the evil one. Showing the violent treatment people received at the hands of the authorities is continually showcased and is never glorified nor does it feel gratuitous. The Algiers Motel sequence is designed to internalise the violence to show how it affects those who have to endure it.

There are hints of complexity within this framework such as John Boyega as a security guard who struggles to look out for his people while maintaining the tenuous trust that he has built up by virtue of his position. It’s well handled and Boyega does a good job with what he’s given but the film doesn’t do enough with this idea. There was a lot more potential in it that wasn’t dealt with.

A general issue the film has is failing to use the cast effectively. Anthony Mackie has less to do than John Boyega despite the potential afforded by him being an ex soldier who fought for the people that are now persecuting him. Jack Reynor is similarly wasted in a small role as a reluctant cop who doesn’t feel comfortable with what Krauss is asking him to do. The film had a lot of potential to develop the characters on screen in different ways to help give the narrative more emotional heft but most of them fade into the backdrop. It works in showing the scope of the rebellion but suffers when the film takes a more specific focus.

The structure of the film is something that both works and doesn’t. Using the Algiers Motel as the anchor for the story is a great idea as it grounds the massive event with something much more focused. Establishing context in the earlier scenes is good as it suggests that similar horrible things are happening elsewhere but the scenes following the Algiers Motel incident are where the structure starts to fall down. The film culminates in a court case that details the fallout of the incident but is far too rushed to say anything meaningful about it. It’s clear that the point of the film is to show the injustice committed on black people in Detroit during the rebellion and showing that by focusing on a particular failure of the justice system is a good idea in theory but something like that should be given more time to have the point made strongly. Instead it feels oddly procedural and an excellently slimy performance from John Krasinski isn’t quite enough to add the depth required. The point is made and made well but it’s far too rushed so much of the impact is lost.

A solid viewing experience that is really effective in showcasing the broad scope of the Detroit Rebellion as well as the intimate story of the Algiers Motel. The film has a great cast who all do a good job with what they’re given but there was so much potential to use the actors and expand the characters that isn’t taken advantage of. The Algiers Motel portion of the film is a well constructed good vs. evil story with clear markers to distinguish the sides but more could have been done to add emotional heft to the scenario. From a structural point of view the film both works and doesn’t. Establishing the broad scope before focusing on a particular event suggests that similar things are happening elsewhere and reminds the viewer that the incident in question wasn’t an isolated event but the structure falls apart with a rushed procedural court case ending the film. It does make the point well but the impact was lost due to the rushed nature of the sequence.