A network of satellites designed to control the Earth’s weather start to malfunction and threaten the world with an escalating series of devastating storms in Dean Devlin’s Geostorm.

We’ve all seen disaster movies in various forms over the years and to my mind they tend to be enjoyable because of a certain schlock factor that makes them endlessly entertaining. Examples of this include Independence Day, San Andreas and 2012. None of these are “good films” but there’s a lot about them that I like.

There’s plenty of entertainment to be had here. Gerard Butler playing one of the world’s leading scientists is comedic enough on its own. Jake Lawson seems like a character better suited to thinking with his fists rather than inventing complex weather controlling machines. Certainly every action he takes in the film supports this even though the dialogue he delivers suggests that he has intimate knowledge of the workings of the weather controlling machine.

The central relationship of the film is between Jake and his brother Max (Jim Sturgess). They have drifted apart over the years and need the events of this film to bring them closer together. It’s all pretty standard stuff with the most elaborate secret message scene I’ve seen in a long time. Both actors give it their all and to their credit there’s a sense of familiarity to their scenes together so they’re believable enough as brothers.

Added to this ensemble is Max’s girlfriend Sarah (Abbie Cornish); a Secret Service agent keeping her relationship a secret because it’s against the rules for them to be together for some reason. She has good enough chemistry with Jim Sturgess and she’s probably the most believable actor in this film when it comes to playing their character.

Supporting characters such as Andy Garcia’s President Andrew Palma and Ed Harris’ Leonard Dekkom add some level of gravitas to proceedings though certainly don’t stretch themselves as actors. When the conspiracy plot kicks in it’s pretty clear what these characters will do once that happens. Robert Sheehan and Alexandra Maria Lara provide some solid entertainment value as members of the space station crew as well so the cast all do a fair job considering what they have to work with. 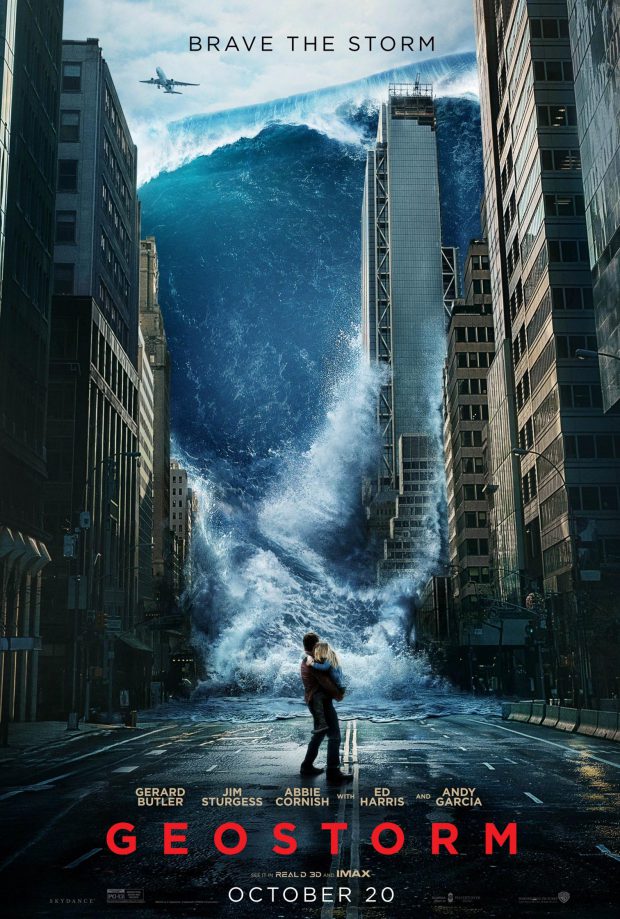 The marketing of this film suggests that there will be a lot of over the top CGI shots of weather destroying famous monuments and levelling cities but surprisingly there really isn’t much of this. There are a handful of sequences showing devastation as a result of a tsunami, tornadoes or other such extreme weather but not as much as you might think. The bulk of the film is a taken up by the mystery elements and later morphs into a conspiracy thriller.

It’s a very strange thing to focus on as it’s not all that interesting. I personally found the scenes of Jake trying to figure out why the satellite was malfunctioning entertaining to a point but I kept wondering when people were going to stop talking about the potential world destroying storms and we would actually get to see some of it. If done well these sequences can be entertaining.

When they do appear they are about as good as you might expect them to be. Widespread destruction with an implied high body count is repeatedly shown with no consideration given to the actual human cost of such events. This is a problem in all disaster movies and the main reason they focus on a handful of people for the audience to root for. The problem here is that hardly any of the characters are involved in these events so there’s very much an emptiness to them that makes them feel like more of an inconvenience for the plot more than anything else. The global body count acts as incentive to solve the problem and very little else. Even by the standards of disaster films it lacks emotional impact.

There’s no single disaster sequence that stands out as being particularly impressive either. They come and go without much fanfare and fail to be memorable for any reason. They are also peppered randomly throughout the film so there is no real build-up to any of them happening. Look at Independence Day as an example where a large chunk of the narrative involved literally counting down to the destruction; San Andreas also prepares the audience for what is to come but this film intermittently reminds the audience that it will happen at some point before introducing a countdown that doesn’t receive any focus. The lack of decent stakes is a definite problem the film has.

Geostorm had a troubling production schedule with reports of reshoots and bad reactions to test screenings which explains a lot about the finished product. There’s an overall disjointed feeling to the film likely caused by the trouble it had making it to the screen. The length of Gerard Butler’s hair obviously changes scene to scene and there are elements that come and go as if they were hastily added without making any attempt to follow them up in later scenes. The finished product is patchy and unfocused as a result which is a shame because there was the potential for real silly entertainment in here.

One thing that really saves it is the tone. Everything is played very seriously which makes it all the more amusing. All of the actors are playing their roles straight which offers an amusing contrast to the ludicrous plot they’re involved in. It’s really effective and makes the whole thing take on a “so bad it’s good quality” that makes the viewing experience somewhat worthwhile.

A somewhat messy experience that doesn’t deliver on its promise of showing over the top disaster sequences. These do exist but take a back seat to a sabotage investigation and conspiracy thriller neither of which are all that interesting. The cast all do a good job with what they’re given despite Gerard Butler being the least likely candidate to play a genius level scientist. It is also saved to a degree by its tone. Everything is played seriously which makes the ridiculousness all the more amusing. The lack of self awareness allows the film to take on a “so bad it’s good” quality that makes the viewing experience almost worthwhile.