The story primarily focuses on Frank (Chris Evans and his niece Mary (McKenna Grace) with the core relationship being their combination of a father/daughter and an uncle/niece bond. This immediately stands out as being somewhat unique as Frank’s position is an unconventional one. He has assumed responsibility for the well-being of his niece after his sister dies and that obligation more or less drives him throughout the film. It shares many of the same beats that a single father narrative would likely have but there’s a sense that Frank is completely overwhelmed by the situation as he has to take care of a child that he didn’t plan for. He is essentially forced to overstep the normal boundaries that being an uncle would typically afford him.

This relationship is really well handled. Chris Evans further shows his ability to be effortlessly charming and he has a really good rapport with McKenna Grace. Their interactions feel real enough and are always entertaining to watch.  The dialogue is really stilted much of the time but there’s a lived in vibe to the relationship that manages to offset that a lot of the time. The film does a particularly good job showing the friction that exists between them. There’s an undercurrent of resentment on Frank’s side as his life has unexpectedly been put on hold by circumstances beyond his control but it isn’t mean spirited resentment. He clearly cares about Mary and enjoy having her around but he struggles with the fact that he has almost no time to himself any more. It’s complex and the film gives this plenty of time to breathe. 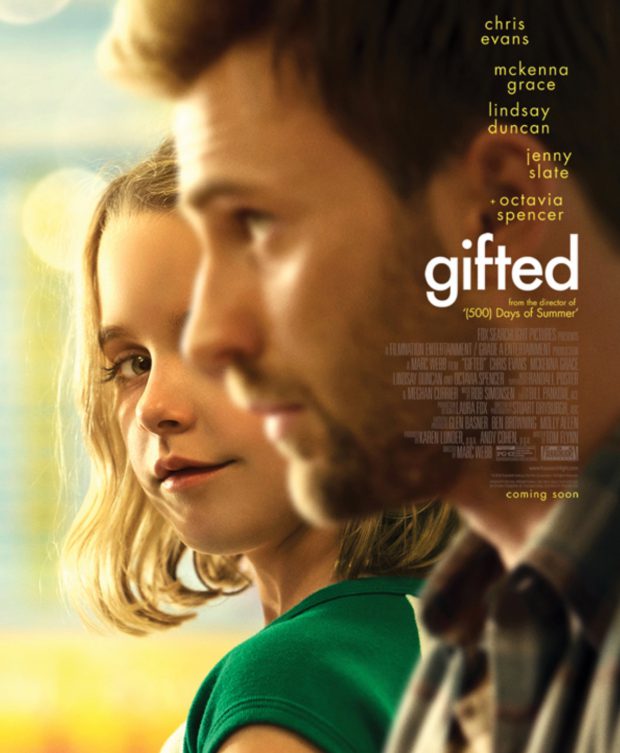 Further challenge comes from the fact that Mary is exceptionally gifted. As I mentioned above she has a genius level intellect and is quickly identified as a child prodigy. This is handled really well on a story level as it is clearly established that she finds no challenge at school and her intelligence keeps her from properly relating to the other children. This would actually have been a strong enough story on its own so it’s a pity that the film only partially focuses on it. Seeing her answer her teachers back and generally mock the whole school situation provides some solid entertainment while McKenna Grace always remains endearing enough to not appear obnoxious.

Her difficulty fitting in at school is only a small piece of the puzzle as the film has a lot of ground to cover. A large part of the story involves Mary’s Grandmother Evelyn (Lindsay Duncan) attempting to prove that Frank is an unfit father figure for her because he refuses to send her off to a school for the gifted to allow her to reach her full potential. Frank’s side of the argument is presented to the audience and it seems reasonable enough at least in terms of how he sees the world but Evelyn’s perspective isn’t given the same courtesy. The script encourages the audience to side with Frank which means that Evelyn is demonised to make this happen. This could have been a really complicated story where two people with understandable points of view are forced to make a case for why they think they way they do but instead Evelyn is an antagonist who is getting in the way of Frank and Mary’s life together. There are shades of the depth that should be there in how Mary reacts to Evelyn but the film really needed to commit to it to deliver the desired impact.

The film has other issues such as an unneeded romantic subplot between Frank and Mary’s teacher Bonnie (Jenny Slate). It’s awkwardly handled, doesn’t add anything to the film and is all but forgotten about after a point. Giving Frank another adult to interact with wasn’t a bad idea but it wasn’t well executed and comes across as another bland love story.

Roberta (Octavia Spencer) is a massive presence in the lives of Frank and Mary and any scene she appears in is a definite highlight. As with everything the film could have done so much more with her since she embodies the closest thing Mary has to a mother figure. There is a lot of that in the film already but establishing Frank’s relationship with her and doing more work showing where she fits in the overall dynamic would have enhanced the film greatly.

The ending itself is fairly clunky in that a lot feels unresolved. It does play like there is a definitive answer to the questions the film asks but it doesn’t land as well as it should and feels very forced. It is definitely elevated by the performances but still doesn’t quite work.

There a re pockets of greatness in this film that are brought down by some stilted dialogue and a general lack of focus on the various plots. Chris Evans is effortlessly charming and has a good rapport with McKenna Grace which helps carry the film but it isn’t quite enough to disguise the fact that the film is really busy. The central relationship of Frank and Mary is really strong and would have been enough to carry the film on its own especially if the focus had been on Mary’s inability to to get along with children her own age at school. Adding in the battle for custody with Mary’s grandmother was another missed opportunity as both points of view could have been explored rather than painting Evelyn as the antagonist. A forced love story subplot doesn’t really work and the ending felt forced and clunky. This film is massively elevated by the performances and the exploration of the core relationship but there was far too much going on for it to be considered great.