Three old men decide to rob the bank involved in the deal that sees them deprived of their jobs as well as their hard earned pensions in Zach Braff’s Going in Style.

Heist movies are fairly common things to find at the cinema. There’s are certain things you can always expect to see and the tension comes from whether they can pull off their intricately laid plans or not. Essentially this film is a typical heist movie with the added twist of the robbers being senior citizens.

That’s not necessarily a bad thing and the movie makes a lot of valid points about the world we live in today. Many are disillusioned with the system they live in and feel abandoned by it. Banks are an easy target after the last recession and this film explores the idea of those affected by a system that doesn’t care about them deciding to take something back. 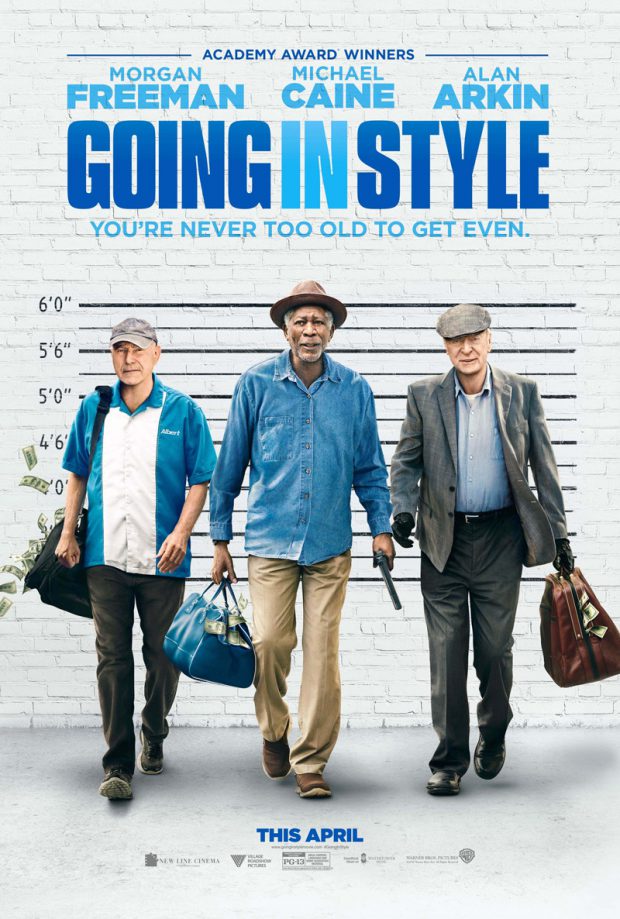 Rooting for the characters is key and this set-up makes it easy as it frames the Bank as the villain of the story. The three senior citizen thieves are only looking to take what they feel they are owed and nothing else so they are functionally the heroes of the story. It works well and the Bank never comes across as something that deserves our sympathy.

The characterisation is important too. Michael Caine plays Joe, a loving Grandfather and overall decent guy, Morgan Freeman plays Willie, another loving Grandfather who is dying of Kidney failure and Alan Arkin plays Albert, a crotchety old man who shuns all companionship outside of his two old pals and seems to revel in being miserable all the time.

Watching these three screen legends bounce off one another is really good fun throughout. The dynamic never gets old and it’s clear the actors had a lot of fun making this film. All three of them are genuinely decent guys which makes it easy to root for them and the fact that they have been friends for a long time comes through clearly.

There are a number of good moments throughout with the standout being a botched robbery of a grocery store that highlights how ridiculous their idea to turn to a life of crime at their stage of life is. This allows for a really funny cameo from Kenan Thompson and provides the biggest laugh in the film. Other notable moments come from scenes featuring Christopher Lloyd who plays an old man who’s passed his best.

Beyond that there’s nothing hugely entertaining going on. The heist planning scenes are good enough and the procedural element showing how they got away with it manage to be somewhat entertaining but there’s nothing particularly memorable to be found here. I suppose it defines itself as a comedy but there are very few laughs throughout and the social commentary doesn’t really go far enough to qualify as profound. Maybe with a little more focus on a central point then the film would fare better but as presented it’s inoffensive and mildly entertaining.

An inoffensive experience that doesn’t do anything particularly well but doesn’t do anything bad either. Michael Caine, Morgan Freeman and Alan Arkin elevate the material with their effortless performances and the film does dabble in a little social commentary that is valid but isn’t really taken that far. There is a standout scene involving a botched grocery store robbery but beyond that everything is serviceable yet unmemorable. It’s an inoffensive experience that rounds out as mildly entertaining.