If you’ve been along to any movie of note in the last couple of months you’ll likely have been assaulted on more than one occasion with the trailers for director Stephen Gaghan’s (Syriana, Abandon) new project Gold. A brash Eighties flavoured vehicle for Matthew McConaughey (Interstellar, Dallas Buyer’s Club), the trailers seem to promise a fairly intense couple of hours of cinema going, all inspired by true events. With this in mind, how does the reality hold up to the hype?

The movie follows McConaughey’s character Kenny Wells, a mineral prospector, and a man sure of his abilities and resolute that he can find a big score. As that becomes more and more elusive, and his company sinks into serious financial difficulty, he gambles on one last throw of the dice and heads to Indonesia looking for gold. Here we meet Michael Acosta, a geologist played with considerable charm by Edgar Ramirez (The Girl on the Train, Joy), who seems to be convinced that he can find the mother load and bring Wells’ dreams of a goldmine to fruition. This is the jumping off point for the story as we follow Wells and Acosta through the jungle as they prospect for gold, and fairly interesting stuff it is too, showing the hardship and recklessness that Wells is prepared to suffer for his dream.

If you’ve seen the trailer, you’ll know that they appear to find what they are looking for, and the story now switches tack from being an exotic adventure to an eighties corporate thriller as Wells does everything he can to keep control of his dream whilst the full weight of capitalist America tries to wretch it from him. There are ups, there are downs and there are serious pacing problems. 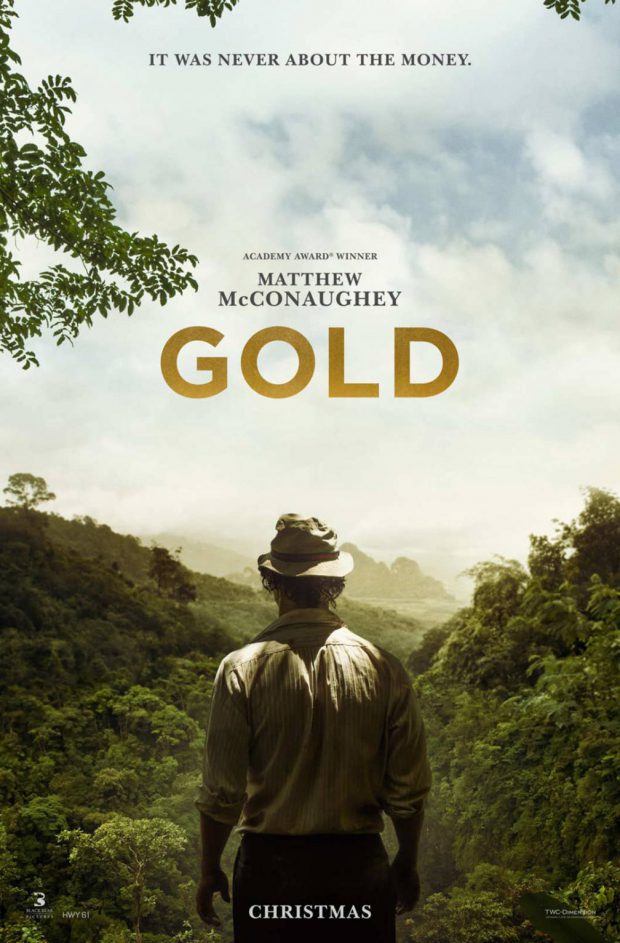 Firstly let me say that Gold is not a bad movie. The cast are all strong, with Ramirez putting in a fine understated performance that lets his natural charm shine though, and Bryce Dallas Howard (Pete’s Dragon, Jurassic World) looking almost unrecognisable as Wells’ other half Kay, whilst also giving her such sweet yet strong empathy that you’ll fall in love with her just a little bit. Gaghan also does a fine job managing McConaughey, letting him have fun with Wells and his outgoing and brash nature without ever going “full McConaughey”. Another thing to praise is the job the location scouts have done for the Indonesian sections of the film. It might seem like a small point to pick up on , but the beauty of the landscapes on screen are almost worth the trip to the multiplex on their own. To top it all off, the story is an engaging and interesting one too, and if you are unfamiliar with the tale, you will happily be taken along from this ride into Eighties excess and nostalgia.

However, as I mentioned, this film has serious pacing and tonal problems. There is no real subtle transition between the chapters of the story, and this can be somewhat jarring. At times it has flavours of a western, or an Indiana Jones tale, then suddenly it’s Wall Street, then it’s Ocean’s Eleven. These tonal shifts make it very difficult to care too much as they jar you out of the story that the fine cast have drawn you into. On top of that, when the second act twist comes you’ll have seen it telegraphed from earlier in the film, and you’d expect things to pick up pace, but instead Gaghan chooses to slow things down making the start of the film feel rushed and the end drawn out. It might seem like a small thing, but it does stay with you, and makes the last fifteen minutes drag out almost uncomfortably.

All in all Gold is fairly forgettable fare, which is strangely frustrating given the riches on offer. The performances are good, and the attention to detail for the period is impressive, but the deficiencies of the direction reduce what should have been a fascinating tale of Eighties excess into something that you won’t remember a couple of days later. Scratch the surface of this movie and unfortunately you’ll find it’s only gold plated.