Theodore Melfi’s Hidden Figures tells the vastly under-represented story of the team of African-American women mathematicians who were vital to the early days of the United States space program.

Typically biopics about the space program focus on the astronauts involved so right away this story stands out as something different. In some ways it’s baffling that there hasn’t been a film about these women yet -though an episode of Timeless does include one of them- but in other ways it makes sense since watching people do sums and write on chalkboards isn’t always the most riveting visual.

This never seems like a limitation to Theodore Melfi who frames several important scenes around working out the numbers though many of these are built around how the characters react to these along with the investment in the characters that has been built before this point.

Katherine Johnson (Taraji P. Henson) is the main character here and she’s really engaging throughout. Clear obstacles are put in her way because of her race as well as her but she approaches each challenge with determination and self confidence so that she can prove everyone who says she’s incapable wrong. It’s an inspiring story and Henson performs this role wonderfully. She is able to embody the genius level intellect that Katherine has as well as give a powerful or vulnerable performance depending on the needs of the scene. It’s easy to root for her because Katherine comes across as warm and engaging right from her introduction. 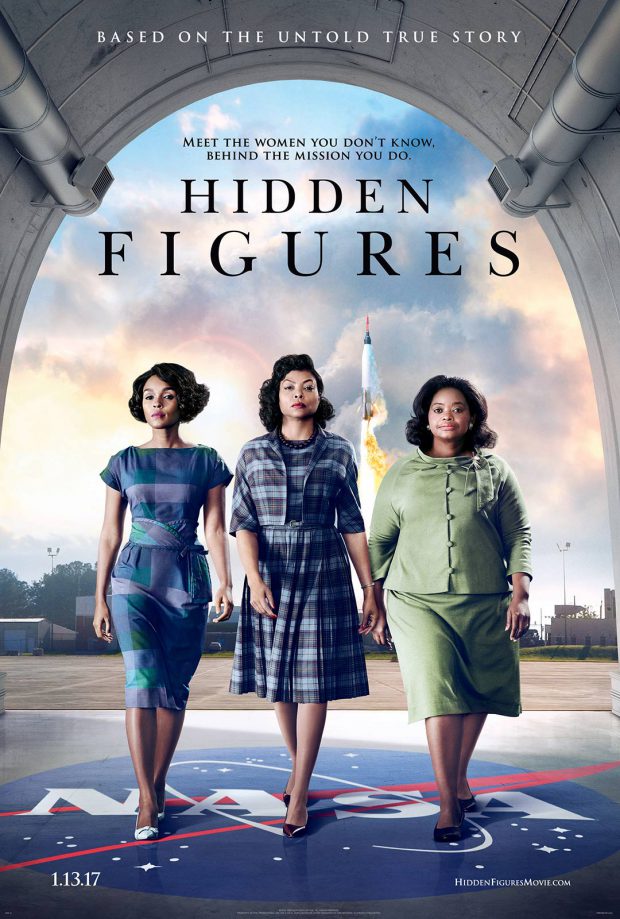 Backing her up are her two friends Dorothy Vaughan (Octavia Spencer); a non supervisor doing the job of a supervisor and Mary Jackson (Janelle Monáe); a woman who has aspirations of being a NASA engineer. These women are performed well and each bring something memorable to the table but their contribution to the film doesn’t rise much above subplot. It’s a shame because these stories are definitely engaging in their own right but they somewhat detract from Katherine’s story. Dorothy isn’t quite as bad as her role is connected to the overall narrative of getting a man into space but Mary’s goals aren’t as closely connected. Despite this the three women have a natural chemistry and the scenes of them just being friends always make for compelling viewing.

There are other subplots that only serve to get in the way of the main story such as Katherine’s romance with Colonel Jim Johnson (Mahershala Ali) which is good enough because of the chemistry between Henson and Ali but isn’t well developed enough to become truly invested in. I understand that this was a significant time in the lives of these real people but in the context of a film narrative it all feels a little cluttered.

Kevin Costner’s Al Harrison is a lot of fun to watch. Costner has always been good at the no nonsense authority type and he plays Al with a natural wit that makes him formidable yet personable. His role in the story is to break down gender and race barriers in service of the larger goal of getting a man into space. It’s an important role and the film doesn’t oversell it by having him on screen more than he needs to be. It’s fascinating to see acceptance through necessity play out as it’s not something I’ve personally seen before.

Jim Parsons’ Paul Stafford interestingly enough isn’t racist but he is sexist. Katherine being a woman who happens to be smarter than him bothers him much more than her race does and his arc involves learning his lesson gradually once Katherine is able to prove herself. He blends into the tapestry of the issues this film is trying to tackle and offers a different perspective on things.

Kirsten Dunst has a relatively small role as Vivian Mitchell but does a good enough job. Her barely restrained hostility towards the African-American women she has to deal with fits in well with the tone of this film and she goes through a journey towards acceptance along with everyone else. She has meaningful interactions with Dorothy that always work and these pay off in a satisfying way.

He doesn’t do much but a special mention should be given to Glen Powell as John Glenn. He is played with an effortless charm and just plain comes across as a nice guy. We see from early on that he’s tolerant and accepting of people being judged on their own merits. In some ways it’s a very bland “All American Hero” type performance but it really does work.

You’d be forgiven for thinking that a film tackling race gender politics with the space program as the backdrop might come across as preachy but this film completely avoids that. The trick it uses is to handle it all with a light touch and much of it is played for laughs. There are powerful declarations when there needs to be but for the most part the audience is encouraged to laugh at how ridiculous these barriers were rather than foster any kind of hostility towards them. There’s a good running gag built around Katherine having to travel an obscene distance just to use the bathroom.

Basically this is a tolerant modern sensibility looking back in time to laugh at how absurd the treatment of people at this point in history was. It’s a good angle to approach this subject and allows the film to be more uplifting as a result. This isn’t a film that will be considered important or a classic anytime soon but it’s very solid and tells an easily accessible story that should have been told long ago.

A solid film that manages to present its main characters really well while avoiding making scenes of people scribbling numbers onto various things tedious to watch. Katherine is an engaging character who is very easy to root for thanks to a strong performance and a well structured character story. Her friends Dorothy and Mary don’t get enough coverage which makes their subplots feel more distracting than anything else. Any scenes they share are engaging enough though. Actors like Kevin Costner and Jim Parsons deliver strong performances as well and their roles within Katherine’s story are clearly defined. The approach of framing the race and gender as if it is something ridiculous that should be laughed at was a really nice touch that fed into the overall tone of optimism in this film. Despite being marred by its distracting subplots this film mostly accomplishes what it sets out to do and provides some easily accessible entertainment.