Pablo Larrain’s Jackie chronicles the events between the assassination of U.S. President John F. Kennedy and his funeral from the perspective of his widow, Jackie Kennedy.

John F. Kennedy’s assassination was one of the landmark moments of the 20th century and lives on as a really significant event that continues to provoke discussion of all aspects including the tragedy associated with it to the conspiracy theories that surround it. One aspect of the story that hasn’t received as much attention -at least when it comes to fictionalising it- is the woman who was closest to it.

Of course Jackie Kennedy’s story has been well documented in other media and this film acknowledges this by using the famous LIFE Magazine interview as a framing device for the story to be told. Jackie (Natalie Portman) tells her side of the story to an interviewing journalist (Billy Crudup) who listens to her every word and deals with her assertive personality as she edits the interview as it is taking place.

It’s a fascinating framing device because it lets us see the real Jackie Kennedy and the crafted public persona that she has created at the same time. Any emotional outburst that betrays her real thoughts and feelings is stricken for the record but it is still allowed to happen and we as the audience are allowed to see it. It’s a clever way to explore how public perception is manipulated in order to tell a preferred narrative. 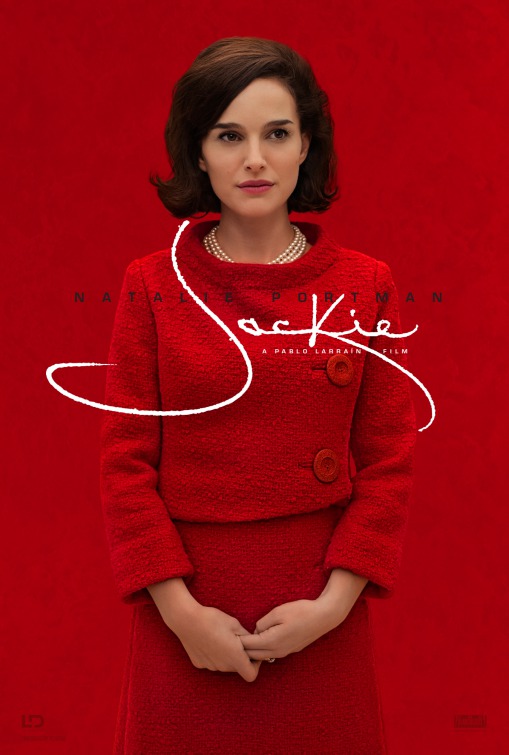 Jackie clearly wants the public to see her as a strong yet vulnerable woman who grieves for her husband while also finding a way to move on with her life. Having the eyes of the world on her at all times takes a toll on her as you might expect and much of the film is about how she managed to appear strong through the worst days of her life.

Natalie Portman’s performance is nothing short of incredible. Her voice, posture and appearance are completely transformed to bring Jackie Kennedy to life and she does an amazing job from the mannerisms to the accent. None of it affects her ability to draw the audience into the raw emotion she projects. Portman expertly shifts from strength in the face of such adversity to cracks appearing in her resolve and sells every second of it. Her performance really shows the difficulties someone would have mourning her husband while trying to project a certain image to the public. The desire to be private with her grief is clear as well as the frustration she feels about the fact that it’s impossible.

Biopics have a tendency to be too broad in their scope which means that pivotal events feel underdeveloped but this film stands out as it focuses on a very small period of time and explores in in unconventional ways. It proves that you can learn everything you need to know about a historical figure by drilling down into the detail of a significant part of their lives without having to tell their entire life story.

In terms of timeline the story jumps around a lot which helps convey the chaos of the events. We see the events before the assassination right through to the funeral but in a jumbled order which makes the narrative feel more real as it is from the perspective of someone telling a story. It’s chaotic but not in a way that makes it difficult to follow and the leaps back and forth help add the necessary weight to the events. The film also gives us a devastating and disturbing interpretation of the assassination itself so viewer beware.

The ending is the only place this film wavers slightly as it feels like it is trying too hard to close with something profound which clashes with the sombre and deliberate tone established throughout. It wasn’t massively jarring but it felt contrary enough to be noticed.

Jackie’s interactions are the core of this film and the way she behaves around different people gives a really interesting insight into her as a person. She is very candid with Billy Crudup’s journalist even though she won’t let him repeat a lot of what she said but inside the story itself she mostly deals with a handful of people. One of these is her husband’s brother Bobby (Peter Sarsgaard) who she initially keeps at arms length but eventually embraces the familial connection and is able to open up to him. The scenes that Sarsgaard and Portman share are varied and well put together with the suggestion of a history there as well as some strain to their relationship now that JFK is no longer around.

She is able to be close to her true self around Nancy (Greta Gerwig) who is always nearby and privately supports her. In many ways Nancy represents the purest connection she has to normality and their friendship feels like a very genuine one despite the brief moments they share.

The most interesting interactions Jackie has in the film are with a priest (John Hurt) who offers her the religious line about God having a plan and choosing her for the tragedies that have befallen her. Jackie challenges him at every turn but clearly values everything he says back to her. John Hurt is as good as you’d expect in this role and the character is strong because he has an answer to all of her questions while never wavering in his belief.

It’s really fitting that I write this review on the day Donald Trump is inaugurated as President of the United States as this film talks a lot about what that position means to the country as well as the rest of the world but also gives us insight into what it meant for Jackie Kennedy especially since that title and all it came with it was removed from her at a moments notice. It could be said that she represents every First Lady and shows just how important that position is but also how fleeting. It’s a powerful film that makes points that resonate and linger after the credits roll.

A powerful film that offers fascinating insight into the real Jackie Kennedy as well as the image that she projected to the world. Natalie Portman’s performance is incredible in the lead role and the story is really unconventionally structured which matches the setup of a story being told. Jackie’s core interactions with her friend Nancy, her brother in law and a priest are really eye opening and fascinating in very different ways. The different perspectives allow for exploration of her character. The ending is the only place the narrative wavers slightly by trying to close on something profound but other than that the film is powerful and thought provoking.