King Arthur: Legend of the Sword

I vividly remember coming out of last year’s much anticipated Batman vs Superman, and uttering the words “I don’t think I have ever seen such a joyless movie”, and for just over a year that held true: Until now. with King Arthur: Legend of the Sword, Guy Richie (Lock, Stock, and Two Smoking Barrels, The Man from U. N. C. L. E.) has managed to craft a piece of cinematic dross so lacking in fun and so far up itself that it is a wonder that the cast even bothered to turn up on set. In fact any time the audience did laugh at our screening, it felt more like a nervous Stockholm Syndrome reaction to a brief let-up in the unrelenting tone.

I’m getting ahead of myself, let me back-track to my usual, softer opening to a review. It was a Wednesday night, and some friends and I found ourselves at a preview screening of one of the worst attempts at movie-making in recent cinema history. Wait, sorry, I got away from myself again there.

Deep breaths, I can do this….

King Arthur: Legend of the Sword attempts to tell the well worn tale of King Arthur and how he came to be king after pulling the sword Excalibur from the stone, proving he is the one true king, and, with the wise guiding hand of Merlin, uniting the country and bringing together the best the realm has to offer as his Knights of the Round Table. Obviously as this is a Guy Ritchie film this is done a little differently, and we open to an already established Camelot being attacked by hundred metre tall elephants that are being controlled by a nasty mage, and the only way to stop them is by a nice bit of parkour by a criminally wasted Eric Bana (The Finest Hours, Star Trek) as King Uther Penndragon, as he climbs the elephant and takes out the Evil Mage. Turns out that there is a bit of a war going on between the humans and mages, and Uther’s brother Vortigen, played by a misery inducing Jude Law (Spy, The Grand Budapest Hotel), is a bad penny and wants to kill them all. In fact he wants to be king, so he uses magic, knocks off his brother and sister-in-law but misses the young Arthur, but in the process giving him nightmares for years to come.

If this seems a bit off-story for King Arthur, and overly convoluted, you ain’t seen nothing yet, and we’ve not even gotten to the meat of the story yet. Turns out the young Arthur managed to escape in a boat to Londinium. Why Londinium you may ask, when this is all supposed to be happening in Cornwall, Wales, or even Cumbria (going by the original stories). Well, that gives Mr Ritchie an excuse to set up our young hero as a London Gangster, growing up in a brothel, and “being a bit tasty” in a fight, and “a bit cheeky” with the local populace. Once grown, Arthur is played by Charlie Hunnam (The Lost City of Z, Crimson Peak), and this is one of the biggest disappointments of the film, as you can see with a decent script, and with a different director, he has the quiet authority that would make for a very compelling Arthur. Unfortunately, with this script and with this director, his ability to act actually counts against him, as he really isn’t “Geezer” enough to carry off what Ritchie obviously wanted. 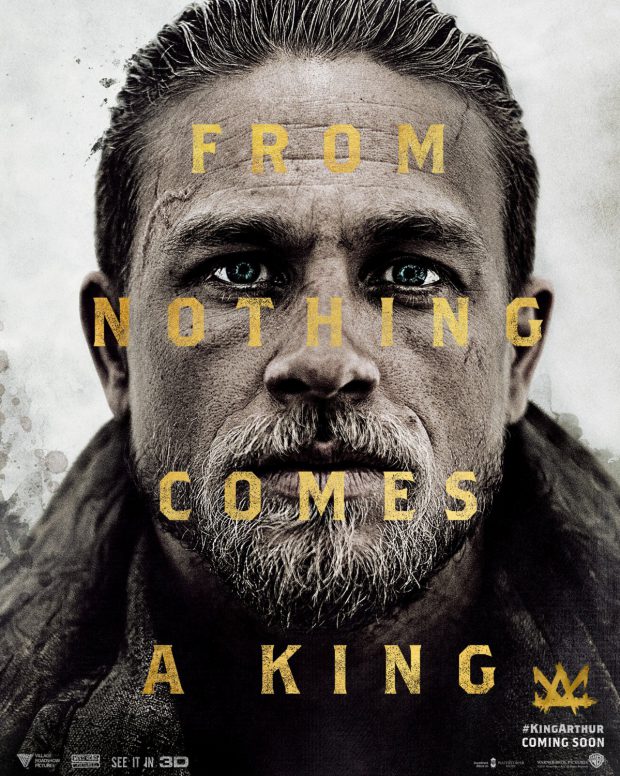 Back to the film, and we are introduced to our band of heroes, which includes, and I really am not making this up, a character called Kung-fu George, brought to nonsensical life by Tom Wu (Kick-Ass 2, RED 2). There’s also Merlin. Well actually, he is only ever talked about, but he sent his side-kick The Mage to help out instead, in a move clearly meant to stop this movie from being criticised for being so lacking in worthwhile female characters it makes a one man show about beard-trimming seem diverse. The Mage is played by Astrid Bergès-Frisbey (Alaska, Pirates of the Caribbean: On Stranger Tides) in such a dull and monotonous way that you really do wish they had animated a staff or painted a face on a log. The story really suffers for the lack of a Merlin, and this place-holder character only serves to emphasise the point. The rest of the cast really don’t help matters either. Vortigern’s henchmen are all played by Guy Ritchie stalwarts, and a bunch of middle-aged cockneys have never looked quite as uncomfortable in badly fitting armour. They try to exude menace, but come across as uncomfortable and embarrassed most of the time. The female characters come off even worse, with most of them not even referred to by name, and mainly there for Arthur to protect, or be canon-fodder so we can understand just how evil Vortigern is supposed to be.

Visually it is also a mess. The 3D is unimaginative at best, with the usual weapons coming out of the screen at you parlour tricks, and at worst makes it look like the effects haven’t been finished. Add to this questionable CGI snakes, and computer game level animation for some of the monsters, and you are left wondering why anyone let this terrible idea get this far. Ritchie also tries to be clever with a camera bolted to Hunnam’s head at one point, and it only serves to underline how bereft of original ideas he has become.

I could go on. The lack of any character motivations, the weird sound-editing, the oppressive tone, even the lack of any real colour, all served up in a package of self-importance that genuine auteurs would be hard pressed to match, but I want to go to bed and stop thinking about this movie, so I shall digress.

Just in case you are thinking I’m bashing this movie just because it’s a Guy Ritchie film, I can assure you it is not that. I think he made a really great movie with The Man from U. N. C. L. E., and showed some real growth as a director in doing so. This film is him at his laziest. The obsessive need to make any film a cockney gangster movie, no matter how badly the template fits is disheartening. After having seen the trailer for this, I went into the screening with very low expectations, and unfortunately even they weren’t met.

To take on such an iconic story, and to get the tone this wrong, especially when it has been done so well in the past with such classics as John Boorman’s Excalibur, does make you wonder how this even got made in the first place.

Hunnam is too good for this film, and I hope it doesn’t hurt him in future, but there is a scene with him getting out of bed, sweaty, and shadow boxing in a way only a very stereotypical Guy Ritchie character would that starts your eyes rolling early on. If only they could have stayed rolled into the back of my head, then I wouldn’t have had to suffer watching the rest of this film.