Matthew Vaughn delivers a follow up dose of comedic spy action that ups the stakes and expands the mythology in Kingsman: The Golden Circle.

The first film was a lot of fun but lacked an obvious jumping on point for a sequel since the character arc for Eggsy (Taron Egerton) appeared to be complete so there was nowhere for the character to go other than retreading the same ground. At least that’s how it appeared so the only thing a sequel can do is try to be bigger than the original and add some new elements to play with.

This is exactly what it does and it does this really well. Eggsy has completed his journey towards gentlemanhood but hasn’t lost his rough edge so there’s still plenty of opportunities to hear him call people “bruv” and generally stick close to his roots. I liked this decision as it kept the character likeable and shows how he has adapted his training to his own purposes. Taron Egerton is constantly likeable and comfortably shows that he makes for an engaging leading man.

It doesn’t take long for the plot of the film to kick in once the Kingsman organisation is completely destroyed by parties unknown which leaves Eggsy and other survivor Merlin (Mark Strong) out in the wilderness with only their wits to rely on. It’s fairly common for sequels to films that establish organisations to tear that organisation apart to prove that the characters can thrive when their resources are limited. This happens in pretty much every Mission Impossible film for example and there are numerous James Bond films where the titular character has to get by on little more than skill. 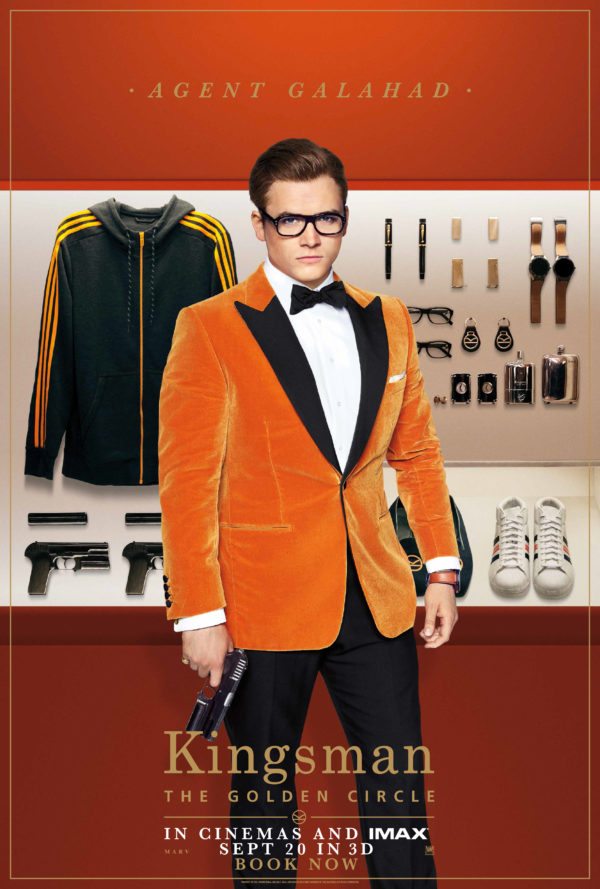 Eggsy and Merlin aren’t without resources for long as they come across Kingsman’s American counterpart; Statesman and have their Southern inspired weaponry at their disposal for the remainder of the film. The Statesman organisation is a lot of fun to play with as it feels familiar to Kingsman but also different enough that there is plenty of scope for creativity in the weapon design. Stetsons housing medical equipment, tricked out lassos and whips and a machine gun briefcase being among the more fun gadgets on display. Statesman feels like a natural part of this world while also having its own identity. I would go so far to say that they deserve a spinoff of their own.

With a new organisation brings new characters. Representing the American contingent are Tequila (Channing Tatum), Whiskey (Pedro Pascal), Champ (Jeff Bridges) and Ginger (Halle Berry). They are all memorable in their own way though Tequila and Champ are sidelined fairly quickly and contribute little to the overall story. When they are featured they make for entertaining viewing but their contributions are brief. Whiskey is good value when he’s on screen and Ginger gives Merlin someone to bounce off while sitting at a desk typing so every new character does have their purpose.

Returning from the dead is Eggsy’s mentor, Harry (Colin Firth) in a move that may have been a questionable one if the film hadn’t found a decent use for him. His relationship with Eggsy is deepened rather than repeated so his return doesn’t feel like the cheap cop out it otherwise could have. Colin Firth is great in this role and it’s still wonderfully unexpected to see him take on an action role.

In terms of villains this film does a great job. Julianne Moore plays Poppy, the wealthy leader of a drug cartel with the aim of forcing the legalisation of drugs so that she can be recognised as a legitimate business woman rather than hiding in the shadows being underappreciated. It’s a simple and hilarious villain plan that fits the tone of the film and provides plenty of opportunities for Julianne Moore to gleefully chew scenery in immensely entertaining ways. Her character even has a distinct visual style with her lair being themed on how the 1950s appeared as nostalgia in 1980s movies. It’s creative, visually distinctive and a lot of fun as a character quirk.

The way her plan plays out is interesting with additions to it that are too amusing to spoil. Her presence also allows for a really creative use of an appearance by Elton John that only gets more amusing the more he appears. Again, not something I want to spoil but it is delightful to watch.

Kingsman: The Golden Circle is no slouch when it comes to the action. There are no shortage of action sequences and some of them are more creative than others though all of them are immensely entertaining to watch. Notable highlights include close quarters combat in a moving vehicle at the beginning of the film and the assault on Poppy’s lair towards the end. There are also fun riffs on the memorable “Manners Maketh Man” bar room brawl from the first movie so there is plenty for action fans to sink their teeth into.

The film falters slightly by moving the plot forward at the expense of emotional moments. It feels like the plot progresses a little too quickly and leaves viewers struggling to keep up. More time after the destruction of the organisation to let Eggsy and Merlin catch their breath and commiserate their fallen comrades might have been better rather than rushing to the introduction of Statesman. It’s strange to have a 2 hour 21 minute long film feel rushed but it shows how well put together it is to have me wishing it slowed down a little.

An immensely entertaining time at the movies with fun characters, creative action and an entertaining villain. Expanding the mythology by introducing Statesman was a nice touch and evolving Eggsy organically from the first film works really well. It could have been a bad idea to bring Harry back but his use in the story and his relationship with Eggsy makes it feel like more than a gimmick. The film could have slowed down a little to allow for more emotional moments rather than rushing to the next plot point but it’s a worthy sequel and immensely entertaining throughout.