Manchester by the Sea

Having just returned to work that day from my New Year break, I was possibly not in the best mindset to venture forth to this screening of a film that’s trailers hadn’t tempted me, but who’s hype and overwhelming good press had finally peaked my interest. There is very little doubt that Kenneth Lonergan (Margaret, You Can Count on Me) is a very serious film-maker. His new, and critically acclaimed, work is Manchester by the Sea, a story of loss, guilt, and, to a certain extent, acceptance that is well written, beautifully acted, and unremittingly depressing.

The story revolves around Lee Chandler, played in an almost painfully restrained manner by Casey Affleck (The Finest Hours, Interstellar), a janitor in Boston, as he is called back to his home town to deal with the death of his brother, and the arrangements for his nephew Patrick. There is evidently some great tragedy in his past that has crippled his life, and through flashback we learn what it is, and how it affected those he loves. I said that Affleck’s performance is painfully restrained because as an actor he doesn’t actually do very much here. He’s the blank slate that the rest of the cast plays off of, not looking for interaction, or showing any real emotional range, letting those up there on the screen with him play on this canvas, letting emotions and life spark from the screen.

This is seen particularly strongly in the performance of Michelle Williams (Shutter Island, My Week with Marilyn), who plays Lee Chandler’s ex-wife. With some of the buzz around her work here I was expecting to see her on the screen for large portions of film, however her interactions are few, but emotionally driven. If I’m being a little harsh on her, I don’t think the hype around her performance did my expectations any favours, as I was left feeling I should have been more captivated than I was. Without a doubt she has put a lot of herself into this, and it is moving, but we know so little about her character as it lacks a deep back-story, and she is on screen for such a short amount of time that I was left feeling a little less affected than I thought I would be, as impressive as she is. 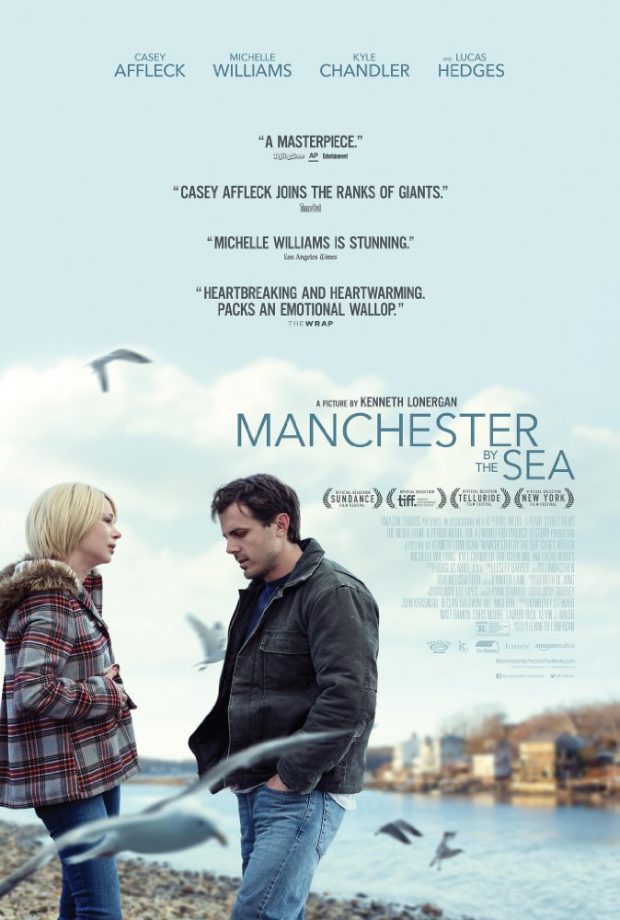 The other real standout is Lucas Hedges (Moonrise Kingdom, The Grand Budapest Hotel) playing Patrick. As a teenager who’s life is getting turned upside-down, and seems to be coping with it by being stubborn and selfish, in lesser hands Patrick could have come across as completely unlikeable, but Lucas instils a dry humour that saves the character. I found him to be strangely distant from his own life, and hideously unsympathetic of other people’s plight, but I also felt that came more from the writing than the performance. As time continues he does soften, and the events of the movie start to affect the character more, Lucas starts to bring a real warmth and vulnerability to the part, transcending the horny teenage stereotype that his early scene’s saddle him with.

Credit must also go to Lonergan, as the direction is crisp, and the visuals, although very cold, are beautiful. In a day and age where flashbacks are more and more a staple of Hollywood fare, he uses them sparingly, and every single one brings something to the story, and at the right time. You do find out about the tragedy, but not until you’ve learned about the lives it changed so dramatically, and you also don’t have to wait so long that it the not knowing starts to frustrate. This even hand should be applauded, and shows a talent for storytelling that few have mastered.

That being said, this is where watching Manchester by the Sea catches up with me, and I start getting negative. No matter how well acted, written, and directed it is, this movie is depressing from start to finish on an almost oppressive level. It will hit some on a personal level, and to those people you have my warmest thoughts, as the events in this film are crushing, but that group will hopefully be fairly small. I guess I just don’t get where the joy of film-making or story-telling comes from in a picture like this. It’s not even like the story starts off happy and things go wrong, this is just a parade of heartbreak from almost the opening shots. A beautifully realised parade of heartbreak, but a parade of heartbreak none the less.

If you are feeling down, please go watch something else, I don’t want to be responsible for more unhappiness in people’s lives. However, if you have a sunnier outlook on life, and steal yourself suitably, Manchester by the Sea does have many good things going for it, and it might just be worth your consideration.