Barry Jenkins’ Moonlight tells a story of self discovery through the eyes of a young boy who struggles with his identity at key points in his life.

People are never what they seem and multiple versions of everyone exist depending on who is interacting with them and making their own judgements. This idea is at the heart of this film where people are shown to be far more than is suggested by what they put out into the world.

The case study for this is Chiron who is shown as a child, a teenager and an adult through the neatly divided sections of the film depicting his life at three transitional points and exploring the effect his own self discovery has on him.

In the first third of the film he is known as “Little” (Alex R. Hibbert) and the perception theme kicks in almost right away when he is taken in by a drug dealer named Juan (Mahershala Ali) who gives him a meal, emotional support and teaches him some important lessons. He isn’t used to affection because he gets none from his drug addict mother Paula (Naomie Harris). She isn’t a fit parent at all, spending most of her income that she gets from prostitution on drugs and forgetting the way she mistreats him. On top of that he is relentlessly bullied at school. 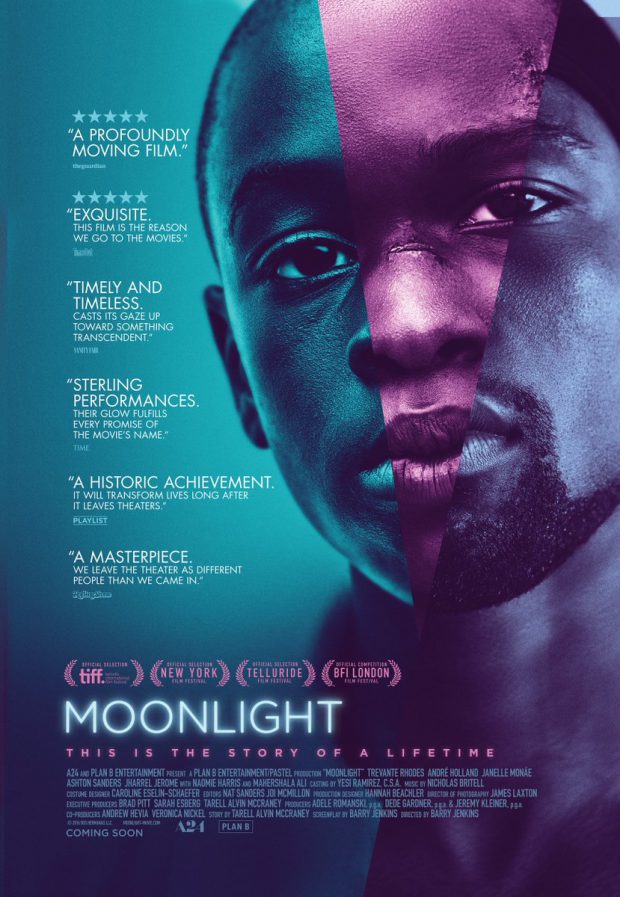 As the film progresses through the other two chapters we learn that Chiron grapples with issues of self confidence as well as his own sexuality and these follow him to adulthood (Trevante Rhodes) where the outward perception is that he’s a confident and sinister drug dealer who shouldn’t be messed with. The reality is very different as Chiron always remains timid and completely unable to resolve his internal conflict. This pays off towards the end of the film when he reconnects with Kevin (André Holland); someone he had a profound experience with when they were teenagers.

The themes are strong and they play out in really powerful ways throughout. I liked seeing Chiron growing up and his personality evolving as he does so. The script and performances impressively make him feel like alterations of the same thing and his adult self clearly shows that things have been learned from his experiences.

For me personally this is another of these films that completely works on a technical level and has themes that really resonate in a modern context but just doesn’t work for me. I really enjoyed the first third of the film but found that it ground to a halt after that and never recovered. Chiron was an engaging enough character but I didn’t find any of the other characters to be all that impressive. The adult Kevin was good but we didn’t see enough of him and I would have liked to see more interaction between him and Chiron.

I can understand the more deliberate pace to draw the audience into the feelings of inadequacy that make the shortest of conversations entirely difficult and awkward but the visualisation of that is long scenes where not a lot is going on beyond that. I fully accept that this film wasn’t for me but it still managed to make me think about the strong points it was making about race, social status, sexuality and growing up in general. Even though I didn’t enjoy the film it still made me think and that’s absolutely worth something.

A thematically rich film that has a lot to say about race, perception, growing up and sexuality. The three acts being divided into different aspects of him growing up was really effective and the development of the character felt natural. Despite this I was unable to enjoy the film as I found that it dragged painfully in the second half. I understand that the film was showing how awkward situations can feel like they linger forever but the scenes themselves didn’t quite work. Most of the characters outside of Chiron felt a little thin as well. This is definitely another case of a film not being for me rather than being bad and I can definitely acknowledge what it does well.