The lovably accident prone bear with good manners and a heart of gold returns for another cinematic outing in Paul King’s Paddington 2.

Paddington’s first cinematic outing was such a joy to watch that I’ll admit I was eagerly anticipating a second instalment. Everything about the first film fit together neatly and the end result was one of the most engaging films of that year.

This film begins by establishing how essential a part of life Paddington (Ben Whishaw) is to the people of Windsor Gardens. He provides a neighbour with a much needed breakfast sandwich, prevents another neighbour from being locked out of his house because he has forgotten his keys and generally spreads a feeling of joy to those he encounters. The first film was very much about him finding his place in London where this film begins with him having found his place and being incredibly happy with that.

Once that is established the plot of the film is about threatening that sense of belonging and security that Paddington feels. He is arrested for a crime he didn’t commit and locked up in prison for it as the Brown family work tirelessly to find a way to clear his name.

It’s a really good setup as it gives the existing characters something to do while making room for new additions to the cast who have a lot to give. Notable standouts include the prison cook, Nuckles -that’s how he spells it -(Brendan Gleeson) who is first established as being hard as nails and uncompromising but has his heart softened by the display of good manners and the taste of a Marmalade sandwich.

The plot itself is simple yet expertly crafted with each section of the film clearly mapped out and all fitting together seamlessly. Nothing about it feels overlong or unnecessary and the plot manages to create the appropriate amount of threat without going overboard.

Paddington as a character hasn’t changed from the first film and doesn’t change as a result of the events of this film. It’s entirely the point of the character to stay true to who he is and inspire changes in others. The way people change around him might not be believable in a real world context but the world this film exists in borders on fantasy with enough recognisable elements to mirror our own. It’s a world where good manner matter and achieve results. Paddington represents an aspirational goal for people where showing respect and seeing the good in others it its own reward. He isn’t a selfish character; he does the right thing because it’s the right thing and never wavers. The tone of the film is framed around it and the optimism is infectious. 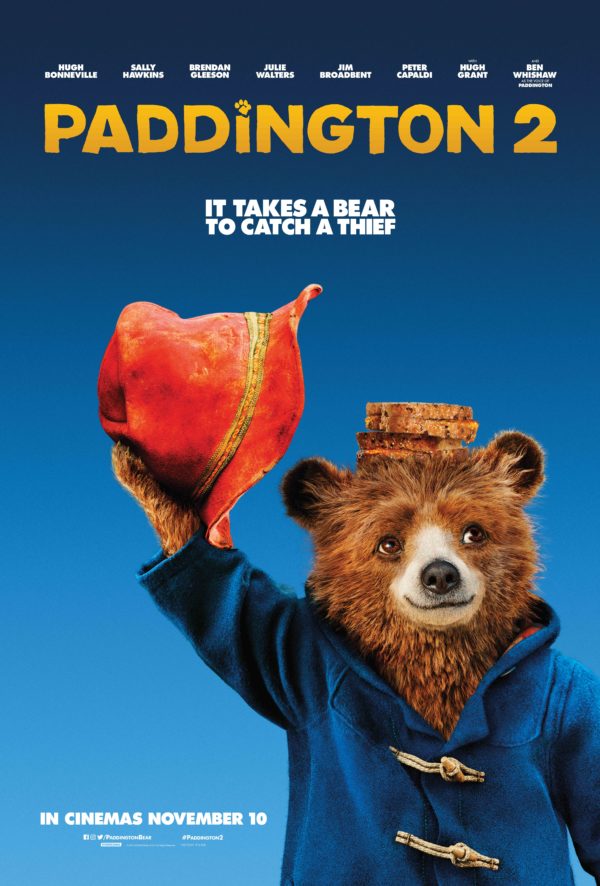 Ben Whishaw’s performance is note perfect. He plays Paddington as being soft spoken, well mannered and more than a little naive. The naivety helps with seeing the good and others and also allows the plot to move forward because he doesn’t understand the notion of being dishonest even for noble intent.

The villain of the piece is washed up actor Phoenix Buchanan (Hugh Grant). He makes for a great villain as he’s just the right level of ridiculous. Hugh Grant completely throws himself into the role and delivers an excellent performance throughout. His arrogance, sense of entitlement and complete inability to see that nobody takes him seriously any more is endlessly entertaining as is the execution of his hilariously convoluted plan. I would have liked to see him interact more with Paddington and have a bit more screen time in general but only because he made for such mesmerising viewing.

Other characters are also well used. The Brown family are instrumental in finding the information that can lead to Paddington’s freedom. Henry (Hugh Bonneville) is once again the voice of cynicism but also willing to lend a hand, Mary (Sally Hawkins) is far less cautious and very active in how she investigates the situation, Jonathan (Samuel Joslin) has a flirtation with hiding his true interests in order to appear cool, Judy (Madeleine Harris) is suffering from a broken heart and needs to find a way to trust people again and Mrs. Bird (Julie Walters) is completely off the wall yet possessing a lot of wisdom. Each of them have their own arcs to follow that complete by the time the credits roll as well as an important part to play in the plot; blending seamlessly with everything else that’s going on. The only potential weak link is troublesome neighbour Mr. Curry (Peter Capaldi) who has a small and arguably pointless role but even that brings entertainment.

The use of comedy in this film is excellent. A near perfect mix of jokes for adults and jokes for kids is achieved without the younger aimed humour comings across as overly juvenile. Part of Paddington’s character is that he’s clumsy which does come into play at several key points but is never exaggerated to the point that it feels unwelcome. His clumsiness feels natural and escalates to just the right level before the film moves onto something else.

Visually the film is a treat with stunning CGI on Paddington as well as a varied colour palette that makes it stand out and enhances the slight fantasy elements that build the setting. Aspects of the film may remind viewers of Wes Anderson on a visual level and the film finds a genius in universe way of making the prison setting lavish and colourful. The set piece moments peppered throughout are exciting, tense and incredibly memorable with notable highlights including an extended chase where Paddington rides a dog and a sequence near the end involving trains. The film never stops being entertaining and boasts an impressive level of variety to make that happen.

With this being a film primarily aimed at kids I’m incredibly impressed by the way it promotes decency, good manners and a palpable sense of optimism. The world we live in can be fairly dreary and that certainly bleeds into the films that we watch so it’s refreshing to see something so relentlessly charming and rooted in so much joy designed to make the audience smile.

An excellent follow up that matches and often surpasses the first film. Paddington as a character is preserved in his entirety and the story built around him is really well told. Hugh Grant makes for an excellent villain, he feeds into the plot nicely and there are a lot of impressively creative choices throughout in telling this story. Visually the film is a feast with enough variety to keep audiences entertained and some stunning set piece moments. Some characters could be seen as extraneous and the villain could have spent more time interacting with Paddington but these are really minor criticisms for a film that is infectious in the way it spreads optimism while promoting decency and good manners. One of the cinematic highlights of the year for sure and it should definitely be watched.