Pirates of the Caribbean: Salazar’s Revenge

I had tried to make it along to see Pirates of the Caribbean: Salazar’s Revenge last week, only for the IMAX projector to break. Thus, I had believed that fate had destined this current wringing out of the franchise for the last of its pennies had missed its chance of a review, Craig having vowed not to darken the doorstep of any screen showing it. How wrong I was, as I found myself with a free evening, a willing co-watcher, and no good excuse to avoid it, and so, with that little completest devil on my shoulder compelling me to go see it, I ventured forth into Screen 7 to see what buckles there were left to be swashed.

We all know the cultural phenomenon this franchise became, bursting on the scene with a first instalment that genuinely shocked and delighted everyone that had said, “Have you seen how low Hollywood has sunk? They’re making a film of a theme-park ride!”. From that point it was always going to be a case of a series of diminishing returns, as Captain Jack Sparrow, brought flamboyantly to the screen by Johnny Depp (Yoga Hosers, Into the Woods), was fleshed out, and yet became a thinner character as each film passed. With Pirates of the Caribbean: Salazar’s Revenge the swagger and confidence of this iconic character finally crash in on themselves, and he is relegated to comic relief as new character’s, along with a smattering of old favourites, take centre stage.

Our basic premise is that the son of Elizabeth Swann and Will Turner, Henry Turner, wants to free his father from the curse of the Flying Dutchman, and to do this he must find a McGuffin, that does a thing, and other people want to stop him so they can get the thing, and there is a cursed Spanish Captain that doesn’t like Jack Sparrow, and there’s the compass, and a girl, and sharks. Ok, there is nothing much basic about this at all. The screenplay is trying so hard to be all things to all men that it bogs down the first hour of the movie into a surprisingly boring mess. When we should be cheering a nice clear reboot of the franchise that would bring back all the swashbuckling grandeur of the original, we have to bring a fair bit of prior knowledge of the franchise to the table. For instance we need to remember about Will Turner being cursed, and the relationship between Geoffrey Rush’s Barbossa and Depp’s Jack Sparrow, and even the significance of Sparrow’s compass. This kills the flow, and when you add in all the new characters and motivations, it just starts feeling like hard work rather than a good time. 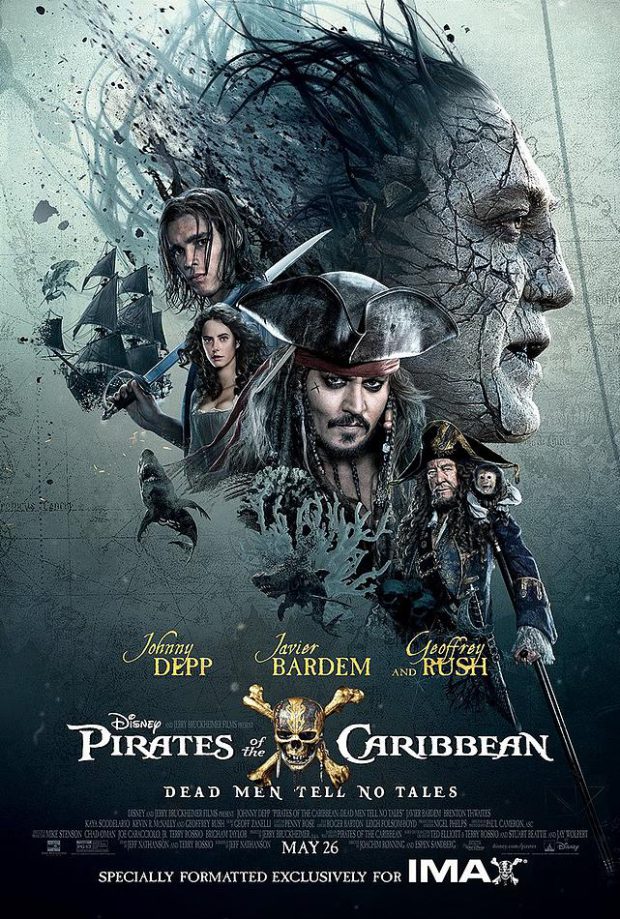 That’s not to say there aren’t some good things on show here. Rush (Gods of Egypt, The Book Thief) as Barbossa is full of just the sort of pirate swagger missing from the rest of the cast, and relative newcomer Kaya Scodelario (Maze Runner franchise) puts in a great turn as Carina Smyth, an orphaned young lady, and woman of science, who’s intellect has everyone wanting to hang her as a witch. She’s also Henry Turner’s love interest, and some choices made in the script later in the film undermine what could have been a fantastic and strong female character, but these shortcomings cannot be put at her door, and she makes the best of what she is given, adding a confidence to the part that promises great things.

Casting wise you will also notice that the Brenton Thwaites (Gods of Egypt, Maleficent) as Henry Turner is a perfectly serviceable actor, and I’m sure there will be more to come from him, but at the moment he looks so fresh faced, has such a deep voice, and is given nothing much else but exposition to spout, that there is a strange disconnect between it all when you see and hear it in the cinema. As I said, with a couple more years under his belt to grow into his voice, and a better script, I expect good things from him.

Javier Bardem (Skyfall, No Country for Old Men) as the titular Salazar is far more anonymous than his acting chops should allow. He tries to chew the scenery like we all expect, but is saddled with the special effects and script that kill any joy in what he could have brought to the franchise. There is a flashback scene to explain why his character hates Sparrow as much as he does (and to bring in what is beginning to feel very much like the almost compulsory “de-aging” of an actor) which allows us a glimpse of what could have been, and to be honest, could easily have been fleshed out to make a far superior movie, giving Jack Sparrow some swagger and the proceedings some adrenaline that is so sorely missed elsewhere in its runtime.

The only other notable things about the cast are the surprisingly amusing, if somewhat over telegraphed in the press, cameo of Paul McCartney, and the return of Orlando Bloom and Keira Knightely. Bloom isn’t in the movie much, but does a decent turn reprising his role, and you’d be being overly generous to even call Knightely’s part a cameo, so all in all, not much to see there, and definitely not worth shelling out your pennies if you loved Elizabeth Swann or Will Turner.

So far I’ve told you of how the script is a mess, and the cast is hit or miss, so now I can move onto the visuals and the score. Visually this movie is a bit of a mess. The new design for the ghostly pirates has no logical consistency in this universe, and will end up bothering you. Bits of them are missing, so characters can pass their hands through them, but the ghosts can also wield swords and fight. Add to that that it looks very glossy, and off kilter with the rest of what is on screen, so you can never really just sit back and immerse yourself in this world. It may be better in 3D, but I have a feeling that it would have annoyed me even more. Some of the ships are also very badly rendered CGI, but then some others come across really well. It’s all just such a mixed bag. Even some of the set pieces come across as by the numbers, and then the next will add a little bit of pep to the proceedings. It just feels a lot like a movie made by committee who decided to throw everything at the screen and hope something sticks.

Lastly, I need to talk about the score. In all the previous movies this has been a genuine joy, and showed how to use music to lead your audience through the action. This time round the main theme isn’t really deployed until an hour in, and even then if feels like a lot of the bombast that made it so iconic has been lost, and that actually cuts me as a cinephile more than a lot of the other things I’ve chosen to point out. When something that iconic and moving is wasted like this, it can really go further to underline the rest of the movie’s deficiencies.

To sum up Espen Sandberg & Joachim Rønning (both: Kon Tiki, Max Manus – Man of War) have brought us a movie by focus group. It certainly isn’t as bad as King Arthur: Legend of the Sword, but it achieves a lot of if good points by relying on our love of at least the first movie of the franchise, Pirates of the Caribbean: the Curse of the Black Pearl. There is missed opportunity in there too, that frustrates to no end, as with Kaya Scodelario’s Carina they had a chance for a great female lead, and genuinely interesting direction the franchise could have gone with her to the fore. Also in the flashback to Salazar’s ghostly origins, there was a genuinely interesting prequel that can now never be made as we know how it would end. The only hope is that with so many loose ends tied up by the end of this gargantuan mess of a movie, the memory of that first trip on the high seas with Captain Jack Sparrow won’t be sullied any further.