I’ll preface this by saying that I was a huge fan of the original series back in the day. I was the right age to be obsessed with it and watching the show defined a lot of my childhood. As such I am probably an easy mark for a high budget modernisation of it. Of course that also means that there is a high possibility that I’ll hate it if too many things are unnecessarily changed.

There’s no getting away from the fact that the original series has its problems. It’s overly cheesy, absurdly plotted and completely ridiculous but I’m putting myself down on record as saying that there is a charm to it that still grabs me to this day. I was recently involved in a podcast where I said exactly that and it’s clear that a lot of people feel that way because otherwise this movie wouldn’t exist in the first place.

The real question is whether this is any good or not. In short I’d say it is. There are problems for sure but generally speaking this film does a good job of bringing across exactly what it wants to be and has some fun with its outlandish premise.

Structurally this film will be really familiar to anyone who has been watching blockbusters since the turn of the century; specifically superhero blockbusters. There is an origin story formula that is remixed in slightly different ways but ultimately boils down to the same story beats. This film follows that formula to the tee. We get the introduction of the characters followed by them getting their powers, learning how to use their powers, mastering them and then taking on the villain in the last act. It’s a proven structure and applying it to the origin of the Power Rangers makes a lot of sense since they are a team of super heroes.

The thing that keeps this structure from seeming dull and repetitive is the characters. This film follows Jason (Dacre Montgomery), Kimberly (Naomi Scott), Billy (RJ Cyler), Zack (Ludi Lin) and Trini (Becky G). Together they comprise the team as the Red, Pink, Blue, Black and Yellow Power Rangers respectively. Each of them has some emotional baggage holding them back from reaching their full potential so dealing with that and learning how to work as a team becomes the key to mastering their powers. There’s absolutely nothing new here but it works. 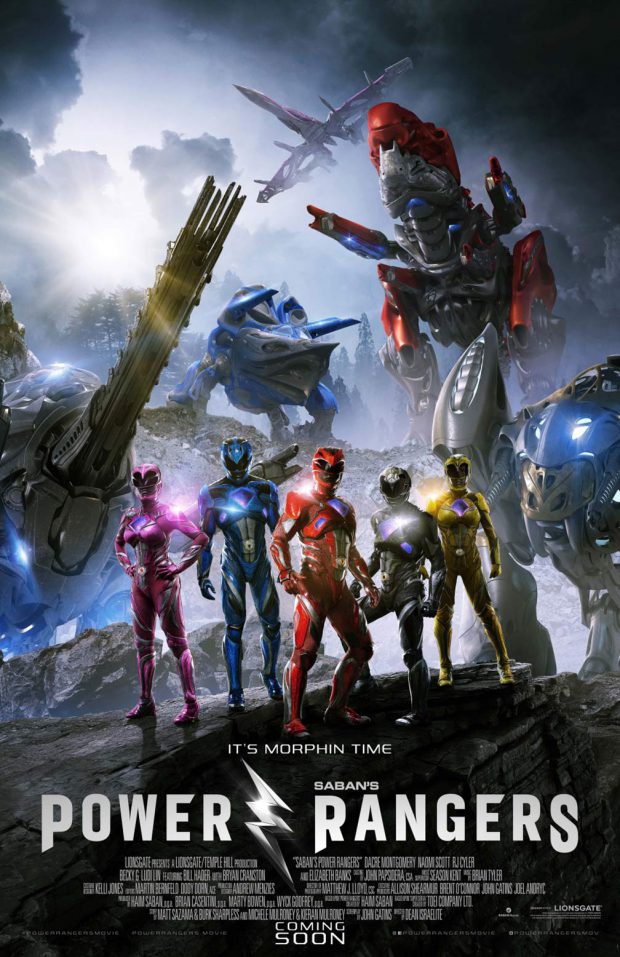 I really liked the characters. The original versions of them were all squeaky clean with backgrounds that suggested flaws they should have that we never saw but these versions are all very flawed and damaged teens. The actors are all really good in these roles and have natural chemistry together which really helps to carry the film and endear the five of them to us. Developing an ensemble cast like this in one film is no easy task but Power Rangers makes a solid go at it.

Not all five of the Rangers are well developed. Most of the characterisation goes to Jason, Kimberly and Billy with Zack and Trini having some clunky exposition to outline what personal issues they have to come to terms with. It’s a shame as Zack and Trini had really interesting backgrounds that I would have liked to see given more attention but the characters receiving the focus were good enough to not make this feel like too much of a waste. The fill even manages to be somewhat progressive with Billy being openly on the Autism Spectrum and Trini feeling like an outsider because she isn’t straight.

Bryan Cranston takes on the role of the wise mentor figure Zordon who is now in widescreen and the character fits in well here. The Rangers feel uneasy about him throughout and he has issues with a group of teenagers apparently being deemed worthy of the immense power associated with becoming a Power Ranger. He has his secrets and there’s a deep sense of regret about the character that creates a solid dynamic between him and the five teens. His backstory adds some depth to the overall conflict and Bryan Cranston is great at delivering the hard nosed authority figure that teenagers would naturally rebel against. Bill Hader’s Alpha 5 is fine and never comes across as overly annoying. He even manages to provoke some genuine laughs.

The villain of the piece is the evil Rita Repulsa (Elizabeth Banks) and there’s not a lot to say about her beyond that. Elizabeth Banks chews the scenery in entertaining ways but the character simply isn’t featured enough to be anything more than something for the Power Rangers to fight against when they master their powers. I wonder if a lot was cut here as it feels like there should be more to the character especially considering her backstory that connects with Zordon.

Tonally the film finds a decent middle ground between the campy original and a more serious take on it without ever descending into the massively overdone dark and gritty trap that many modern reboots have fallen victim to. There are some laughs throughout but the focus remains on making the five teens believable enough to carry the story. The fantastical elements are presented in a way that fits with that but there are some really bizarre tonal shifts towards the end that feel somewhat at odds with the rest of the film. It’s not a huge problem but it is a little jarring.

One criticism I have for the film is that it takes an awful long time to get to what we all want to see. It’s around about the 90 minute mark when the teens master their powers and go into battle against Rita’s forces. I was enjoying the characters so it wasn’t a huge issue but there are moments where the film feels slow and some action may have fixed that.

The last act is a lot of fun though it is disappointing that the Rangers don’t spend an awful lot of time fighting hand to hand in costume. Most of the action involves piloting their Zords -giant robots for the uninitiated- which is great to see but I would have preferred more of a balance in the action much like the original show.

Speaking as a fan it is really exciting to see my childhood imagination come to life in a film like this and have it look as good as it does. In general this film will probably please anyone who was fanatical about Mighty Morphin’ Power Rangers when they were younger. Stick around for a mid-credit scene.

An enjoyable reboot that will please fans of the old school series. The characters are well done with built in flaws, interesting backgrounds and solid performance from all of the leads. Any fantastical elements blend nicely into their character arcs. Structurally it follows familiar superhero origin story beats but that works for this concept. Tonally it’s somewhere in-between the campy original show and a serious take on the concept with enough laughs peppered throughout to keep it from becoming too grim. There are some tonal shifts with a scenery chewing villain and some other elements but on the whole it’s consistent.

One issue is that the film takes a long time to get to the action that everyone wants to see. For the most part I was enjoying the characters so didn’t mind but there are moments where the film feels slow. When the last act hits and the Rangers master their powers it’s very entertaining thought I would have liked to see more of a mix between martial arts and giant robot action. I would definitely say this is a must see for old school Mighty Morphin’ Power Rangers fans or anyone who just happens to like superhero movies in general.

For anyone who’s interested. I came up with my own pitch for a Power Rangers reboot TV series a number of years ago. Feel free to check it out here.