I will go on record saying that I enjoy the Resident Evil games and movies. The games have been with me from a very young age as something I have always enjoyed and the movies are fairly mindless entertainment for the most part. Few would say that they are “good movies” but I’ve always been able to get something out of them.

The reason I began with that is because I’ve never written about these movies and felt the need to establish that if anyone was going to enjoy this it would be me. I would go so far to say that I was looking forward to this and was curious to see how it would end.

Imagine how disappointed I was by just how bad this film was even by Resident Evil movie standards. The key word here is “sloppy”. Everything from the plot and characterisation to the action is a complete mess and I honestly expected better from this franchise. I know a lot of people don’t like it and would pretty much expect it to be as bad as this but there have definitely been far better entries than this one.

The plot -such as it is- is that Alice (Mila Jovovich) gets wind of a cure for the viral outbreak that turns people into zombies or a variety of other horrible creatures and has 48 hours to get a hold of it before all of what remains of humanity is wiped out. It seems simple enough; we have a ticking clock, clear stakes and an objective that is easy to understand.

Problems start to creep in almost immediately when a really long “previously on” segment that doesn’t talk about anything that has happened in previous films. The info dump here is important for this film but doesn’t actually link back to any of the others which just feels bizarre when this franchise has 5 films worth of material to build on. It has never been all that consistent but this feels almost completely divorced from the rest other than a few references and returning characters. It’s bizarre especially since this is supposed to be the concluding chapter.

Structurally this plays out a lot like a video game with plot leading to action leading to more plot that leads to more action. It’s simple and easy to follow with clear checkpoints where the film changes direction and focuses on other things. The problem is that none of it is particularly interesting and the characters never feel anything beyond what we see from them. Again, depth isn’t something this series has been known for before now but at the very least there were compelling things about Alice. All of this is stripped away here for bland plot movement and ludicrous twists that are laughable in their stupidity. 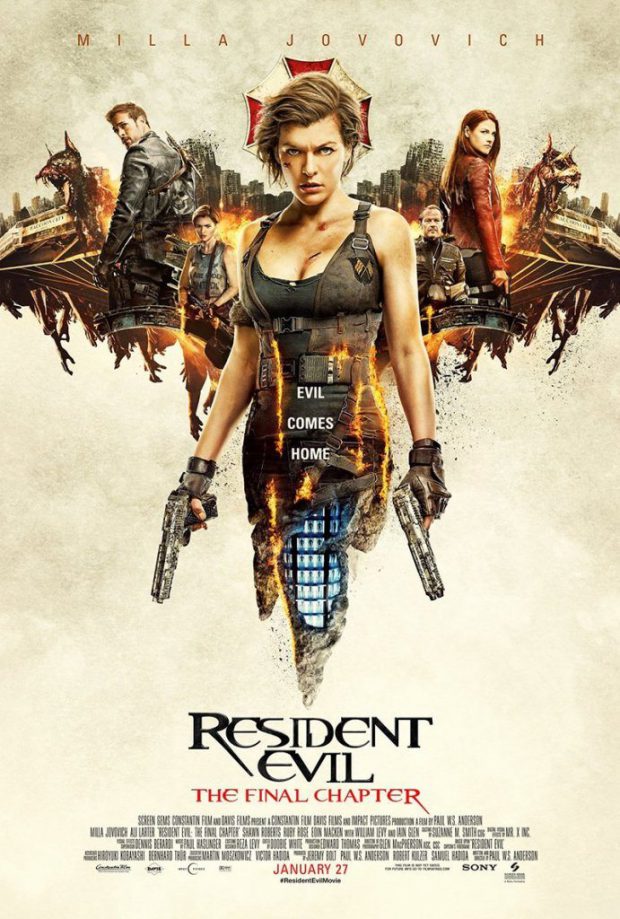 There are a lot of confusing choices here such as benching persistent villain Albert Wesker (Shawn Roberts) to someone who sits drinking in a secure room giving orders to an A.I. to trigger traps. He was a competently handled villain in previous instalments so reducing him to this is a baffling decision especially when the alternative is Iain Glen’s Dr. Isaacs who returns for ridiculous reasons and fails to pass as memorable in any way. The explanation the film gives for him being a physical match for Alice is particularly eye rolling.

A number of characters appear in this film such as the returning Claire Redfield (Ali Larter) as well as some expendable zombie fodder who are barely worth mentioning. There’s no reason to care about any of them because they are so underdeveloped. Ever Anderson as the A.I. The Red Queen does a solid job as a passionless computer program but that’s about the extent of what passes for a compelling character in this mess.

Much of this would have been forgiveable if the action was at least good. Unfortunately it isn’t. It is butchered by so much rapid cutting that I’m not sure if any shot lasts more than a quarter of a second. They are so poorly executed that there’s no possible way of knowing what went on in any of them. A sequence involving a fan stands out as a glaring example because it involves the death of one of the group but it’s unclear who it actually was until at least a minute after. I’ve seen some bad examples of rapid cutting and this definitely numbers among one of the worst. There is a halfway decent sequence calling back to the iconic laser hallway from the first film but even that isn’t all that well executed.

Another thing this film is missing is decent creature design. Earlier films in the franchise have been able to supply a really cool looking mutant abomination or two but this gives us nothing much beyond the standard zombie hordes and a couple of other things. There’s a point in the film where nothing mutated appears at all making me question whether I was still watching a Resident Evil film.

Was there anything good about it? Mila Jovovich clearly seems to care about what she’s doing. This franchise seems to be something that her as well as her directing husband Paul W.S. Anderson get something out of and this can be seen in her performance. She plays Alice as if she’s a compelling character even though this film doesn’t supply any evidence of that so that counts for something. Jovovich is never boring to watch even if the film is.

There is a finality to this film suggesting that the story has ended but there is also a hint that it may be left open for more outings. Based on this I really hope not as I don’t think there’s a story there any more. I know I don’t like reboots but rebooting this franchise into something that resembles its horror roots might be the way to go.

A frustratingly bad experience that doesn’t come close to the rest of the franchise in terms of fun factor. The plot is stupid even by Resident Evil standards, characterisation is all but non existent and the action is horribly executed. I found the villains to be terrible and the story is peppered with too many laughable plot twists that only make sense because of an overlong opening narration. Any action sequences are butchered by horrible shaky cam that makes it impossible to know what is going on and there is a disappointing lack of mutant abominations in here too. Mila Jovovich takes the whole thing seriously at least but it’s not enough to turn this mess into anything close to entertaining. It’s a sad end for a series that I will go on the record as enjoying.