The title of this film works on a number of levels. The most obvious being that Howard Hughes was so rich the conventional rules of society simply didn’t apply to him. He was a man who could have whatever he want whenever he wanted it and his eccentricities along with clear mental issues prevented him from ever being satisfied.

Another level is that the structure of the film itself suggests that the standard rules don’t apply to this film. It doesn’t really have a story as such as there are a few focal points. Some of these pay off and some don’t but it has to be applauded for not following a standard biopic structure. It feels fresh if a little unresolved.

Warren Beatty takes on the role of Howard Hughes as well as directing this film and he does an excellent job on both counts. His Howard Hughes is always incredibly watchable and the pacing of the film does a good job of keeping the audience guessing as to what will come next and what tonal shift we’re about to encounter. It does wear thin after a while and it gets to a point where I was really hoping the film would end but for a long time it definitely worked.

Howard Hughes is definitely depicted as an eccentric here and Beatty is at his best when playing him rambling on about a point where he goes off on so many tangents that always sound like they were meant. There are numerous scenes where he does this and they are all great. Seeing the reactions of those around him as they struggle to make sense of what he’s saying is very funny but there’s always the hint of something really concerning going on. 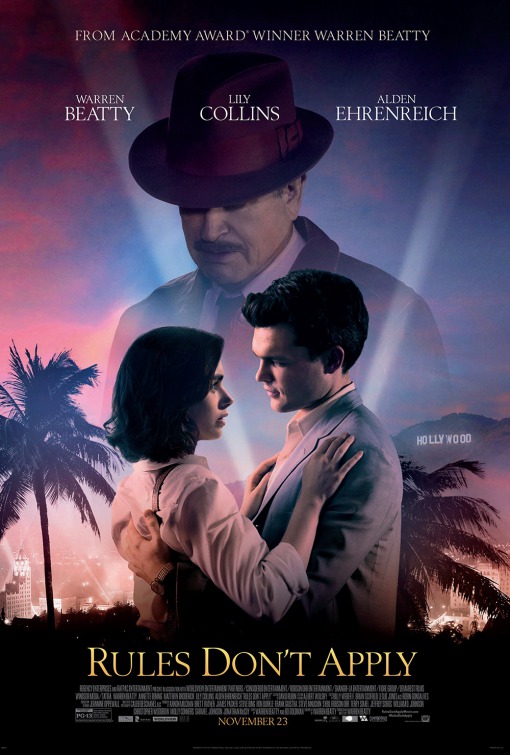 There’s a tragic edge to Hughes as depicted here. His eccentricities are so severe that it has gotten to the point where he appears to be driving himself insane. His moods and demands change on a whim and there’s a real sense that he’s unravelling before our eyes. The tragedy comes from a man who has everything never being content.

Sadly the film never really explores that in any meaningful way. It’s a smart idea to have Hughes start out as an enigmatic figure who isn’t introduced until late on in the story but he never really develops as a character. What we see of him is what we get which is a shame considering the film could have focused on him unravelling.

One thing the film does very well is show how others react to him. Taking up a lot of the screen time are Frank Forbes (Alden Ehrenreich and Maria Mabrey (Lily Collins). Maria is an actress hired by Hughes to be one of his pool of actresses who are looking for Stardom and Frank is a driver employed by Hughes to drive her and other actresses around. The interactions between these two characters are really charming and each of them brings something interesting to their role. Lily Collins imbues Maria with a naivety that never really goes away and Alden Ehrenreich plays Frank as a really deliberate man who wants to follow his passions but just can’t bring himself to.

The romance that builds between these characters is well done and plays to the strengths of the actors who manage to make it feel awkward yet endearing. There are a lot of barriers caused by religion and Hughes himself which adds a lot of conflict and the actors do a great job showing that.

A solid film with excellent performances from the cast that help carry the film. Warren Beatty’s Howard Hughes is wonderfully eccentric while also having a real tragic edge to him that comes through clearly. Seeing him slowly unravel before our eyes is funny but also really concerning. The film juggles different tones really well and feels appropriately disjointed as a result. Unfortunately the film never explores Hughes’ deteriorating mental state in any meaningful way but it is interesting nonetheless.

Showing how others react to Hughes is a really good idea. The characters of Frank and Maria are really well played and their romance despite the barriers to it is awkwardly endearing. Each of the actors shows the conflict coming from their religion and Hughes himself really well.