A theatre owning Koala comes up with the idea to host a singing competition to bring interest back to his failing business in Christophe Lourdelet and Garth Jennings’ Sing.

It’s American Idol or X-Factor -depending where you happen to live- with animals. Now that this is out of the way I can talk about how the film is so much more than that. Of course televised singing competitions like those would spring to mind when viewing this film and I imagine it came into existence to capitalise on the familiarity that people have with these competitions as well as the global love of anthropomorphic animals. Another obvious comparison is obviously Zootopia/Zootropolis which this film doesn’t live up to but, realistically, what does?

Everyone involved with this film could have easily made a shallow story about a singing competition and called it a day but I’m glad to say that isn’t the case. A lot of thought and attention went into making this and it really shows in the finished product.

The film revolves around the above mentioned Koala, Buster Moon (Matthew McConaughey) who desperately wants to stop his theatre from going under due to a lack of popularity. Immediately it’s easy to empathise with him because he has a lot of passion for what he has created even if others don’t He is set up with a strong motivation and McConaughey is clearly enjoying voicing this infectiously optimistic character. Combine this with his ditzy Iguana assistant Miss Crawly (Garth Jennings) and you have a memorable pair to begin this story. 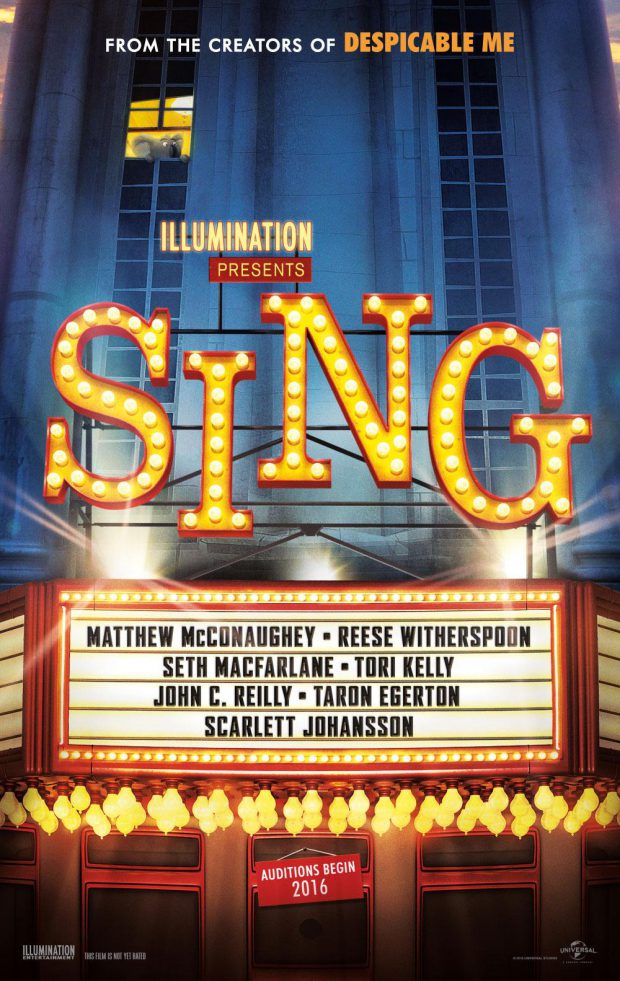 Buster’s singing competition idea allows for other characters to come in from all walks of life that are largely reflected through their musical tastes. There’s Johnny (Taron Egerton) a well meaning Gorilla from the wrong side of the tracks, Rosita (Reese Witherspoon), a pig who also happens to be a mother of 25 with a husband who takes her for granted, Ash (Scarlett Johansson), a Hedgehog with a punk rock flavour who is sidelined by her pushy boyfriend, Mike (Seth MacFarlane), a small mouse with a big voice as well as an inflated sense of himself. and Meena (Tori Kelly), a teenage Elephant with a beautiful voice who suffers from crippling performance anxiety.

The characters are really easily defined but that actually works in the narrative’s favour since there are a lot of characters to keep track of so having an identifiable trait that sets them apart from everyone else makes it easier to follow what’s going on. You could also use the animals they play to separate them out so the film actually does a lot to help the viewer along with the story.

Despite how simple the characters are there is actually quite a lot too them. Each of them have solid backstories that are developed well enough for the purpose of the story and there’s a reason to root for all of them to succeed. The voice work is really good as is the singing with Taron Egerton in particular impressing as he holds his own against the other seasons singers on the cast. The songs themselves are disappointing in part because that are all really contemporary which means that the film will likely feel dated in no time but the placement of them is well done. Each of the songs are used to provoke the desired emotional beat at just the right moment. Is it obvious and manipulative? Absolutely but these formulas have worked for years for a reason and it’s backed up with strong characters who make these moments feel worthwhile.

Everyone will have their personal favourites among the characters and for me it was Seth MacFarlane’s crooning mouse. MacFarlane clearly has a passion for that musical style which will be apparent if you’ve seen an episode of Family Guy so letting him run with the Sinatra angle is immensely entertaining. I was also drawn to Reese Witherspoon’s harangued mother with big aspirations. All of the characters have some worth to them but those were my personal favourites.

This isn’t a flawless experience as you might expect as the story lags considerably about two thirds of the way in before building up to a soppy and predictable ending that feels very par for the course for these sorts of things. It also doesn’t fully capitalise on the singing contest with animals premise when it comes to the auditions. I would have liked to see more terrible acts be features especially when animal reactions could have been played for some obvious yet effective laughs.

A solid and well put together film that clearly had some care and thought put into it. The characters are simple which makes the large cast easy to follow and identify with. Despite this they all have well developed backstories and strong personalities that help carry the film. The use of contemporary music will probably date this film in no time but the featured music is used effectively throughout. There’s some lag to the story two thirds of the way in and more could have been made of the auditions phase of the competition for more laughs but all told this is a really fun viewing experience.